In my previous post on this topic, I described experiences on a trip to China in 1981, particularly visiting a yard in Beijing and watching yard switchers and mainline freight and passenger power, almost all steam. A great experience, and I wish I had been equipped to take video. That post is at this link: http://modelingthesp.blogspot.com/2013/08/my-experience-with-steam-in-china.html .
In this second post, I will describe an event from later in our delegation’s visit to China. After the technical conference in Beijing was concluded, our hosts had arranged some tourism for us. We went to visit the Great Wall, of course, and the other thing they had arranged was to take a train overnight to a site where there were some historic Buddhist cave retreats, as well as a local art museum. This destination, in Inner Mongolia, was a small city called Datong. Now right away, my colleague (and fellow modeler) Gordon Geiger and I recognized that this was where the primary manufacturing plant for steam locomotives in China was located, but we had a pretty full schedule and did not expect to be able to visit the plant.
We departed Beijing on an express train with diesel power, common on the highest-class trains at the time, and went to bed in the sleeping cars. When we awoke, arriving in Datong as the sun was about to come up, we realized that all around was steam. Our train’s power had changed in the night, and we had arrived behind steam (Gordon’s photo at the depot is below), and even more stunning, there was a huge yard, filled with loaded coal hoppers, and all through it were steam switchers working. Gordon and I naturally were grabbing our cameras, but we quickly discovered that Inner Mongolia was regarded as “frontier territory” and militarily sensitive. Uniformed men told us in no uncertain terms, “no photographs.” That was a disappointment, and off we went to our cultural tour.
Here is the shot Gordon got before we were told not to take photos. 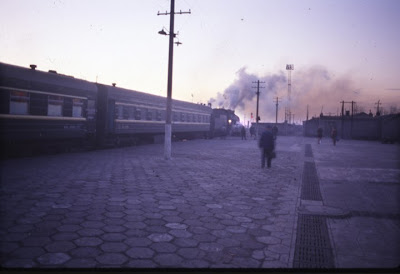 We saw the art museum, and after lunch were to take a bus to the Buddhist caves outside of town. Gordon and I got together and decided to ask if we could beg off the cave tour, and maybe hire a taxi or something, so we could go to the locomotive plant. We asked our guide if he could phone the plant and try to arrange a visit. It seemed that we might be allowed to do this. Meanwhile, others in the delegation overheard us and began to say, “ . . . manufacturing plant?” These were engineers, after all, and this sounded a lot better than the caves. Soon we had a full taxi load, and then it looked like maybe two taxis, and then everyone wanted to go. So to the guide’s credit, he managed to delete the cave tour and take everyone to the Datong Locomotive Works.
It was amazing. As I said to Gordon at the time, seeing all the locomotive components everywhere, it was like a full-size Cal-Scale catalog. There were feedwater heaters, cross-compound air pumps, cast steel pilots, and many other parts stacked everywhere in the assembly space. Gordon and I, of course, knew what all those parts were, so we became the tour leaders and explained to everyone what we were looking at. Here is one example: 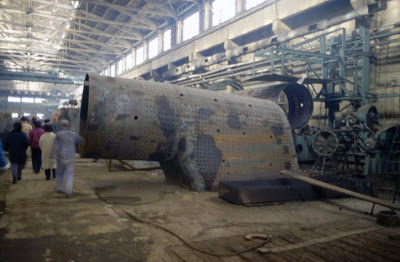 There were also several frames being assembled, with one-piece cylinder castings. 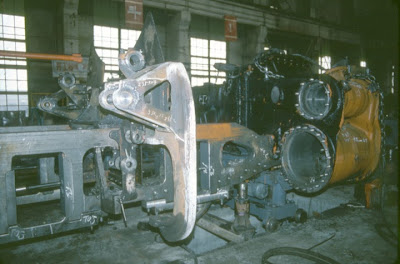 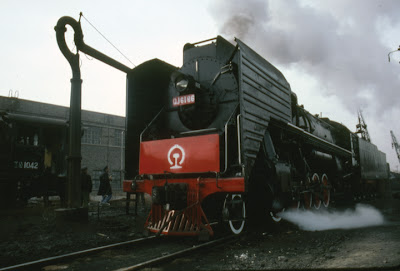 The engine was being put through some tests, and they told us it had only left the factory floor the day before. Of all things I might have expected to see in 1981, a day-old steam locomotive was certainly not on the list. And not only were we allowed up in the cab, but they even let us open the throttle a bit and move the locomotive a short ways on the factory track. What an experience! A photo of me in the cab was taken by a fellow tourist, but was very badly blurred. That was too bad! But the Chinese test engineer was happy to pose for us too. Just imagine that the person in this photo is me. 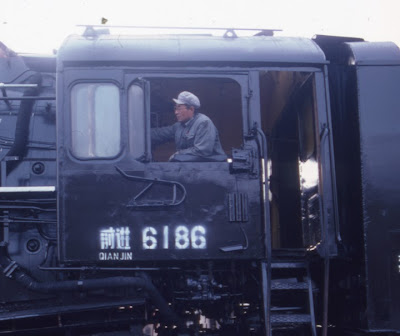 I suppose in cultural terms, our hosts were sorry that they did not show us the Buddhist caves, but our whole delegation, especially Gordon and me, thought the locomotive plant was one of the highlights of the entire visit.
In 1999, my wife Mary and I traveled to China again. She had heard me talk about it so much, she wanted to see for herself. And I wanted to see some other parts of China, like Shanghai, Xian, and Guilin. We did all that, a very nice trip, but one event fits with the story above. By 1999, most of China had been dieselized, and steam was only to be found in a few remote areas—so we had heard. But on the train from Shanghai to Beijing, we saw a Mikado with a local freight, switching a siding. I wasn’t ready with the camera, and by the time I got it out, I only could only take a grab shot out the window (the red characters were on the glass), but I did get to see steam in China one more time. 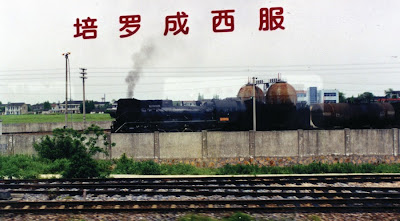 These were great experiences for me, because these were not tourist railroads or special excursions of locomotives which only are operated occasionally. They were working locomotives, doing the job they were built to do. It was a treat to see them.
Tony Thompson
Posted by Tony Thompson at 3:09 PM