The Santa Fe convention in Flagstaff

Over the last week (July 31 through August 4), I attended the Santa Fe Railway Historical & Modeling Society, SFRH&MS, annual convention in Flagstaff, Arizona. Flagstaff is a great place, and though I know some may shudder to think of Arizona in August, in fact Flagstaff is at 7000 feet above sea level, and is surrounded by pine forests. Temperatures were in the 70s for most of our time there. I say “our” time because I drove to the convention with my wife, and Richard Hendrickson and his wife. We all had a great time.
This was the 33rd annual meeting of the Society, and a suitable patch was given to attendees, using the term “Second Section,” as the previous convention at Flagstaff in 1998 (which I also had attended) was also named for the Grand Canyon train. I am by no means a patch collector, but I thought this one was attractive. 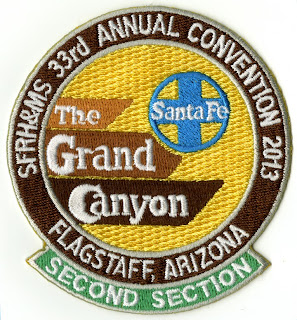 Richard and I were there to present the latest revision of our joint clinic on freight car weathering. We still use the same handout (you can access it at: http://modelingthesp.blogspot.com/2011/10/weathering-clinic-handout.html ) but have made numerous small adjustments to the content. In this case, we both added some photos of Santa Fe freight cars to cater for the attendees at this particular meeting.
Now some may say, “what was I doing at a Santa Fe convention?” since, after all, I model Southern Pacific, and SP and the Santa Fe were in dogged competition in California, which is the setting for my layout. But photos of SP trains in California show plentiful numbers of Santa Fe cars, especially box cars, and the reverse is true, too. Photos of Santa Fe trains in California show plenty of SP cars. So the modeling isn’t just an option, it’s necessary. And I have long found Santa Fe freight equipment interesting, and have belonged to the SFRH&MS and its predecessor organization for over 20 years.
The meeting was held, as in the past at Flagstaff, at the Little America Hotel, a terrific venue and very pleasant for a convention site. As you can see, it’s surrounded by Ponderosa and other pines at this elevation. 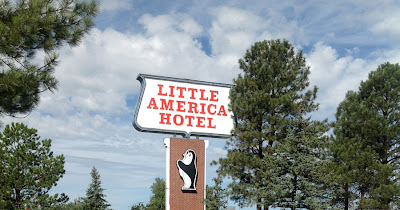 Among the highlights of this convention for me was the steam-powered excursion to the Grand Canyon, a round trip from Williams, on the Grand Canyon Railway. The train was powered on this trip by former CB&Q Mikado 4960, a handsome engine, and the period flavor was enhanced by the cars, three vintage SP commute coaches. Here is a view of the train, during one of the photo run-bys: 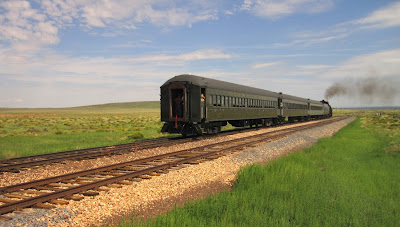 The locomotive was photographed a great many times by all the passengers, at run-bys and at both ends of the trip. Here Richard and I pose in front of it at Willaha siding. 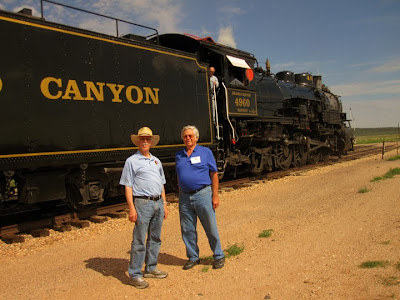 Of course we did get to see the Canyon too <grin>, which for some was the actual point of the trip. 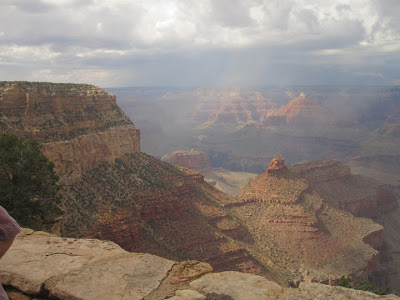 The convention also featured a quite good vendor room, with a wide assortment of model and prototype materials for browsing and sale. This is just an overview to give a sense of the size of the thing. 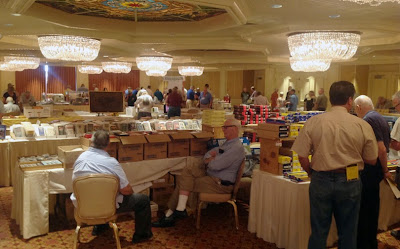 All in all, it was a terrific convention, and the location had all the virtues I associate with Flagstaff. I only go to some of the Santa Fe Society meetings, but when it is in places like Flagstaff, it’s a “don’t miss” for me.
Tony Thompson
Posted by Tony Thompson at 11:17 AM