Having completed my electrical panel work, as described in the Part 5 post in this series (at: http://modelingthesp.blogspot.com/2013/08/electrical-wars-part-5.html ), I connected the panel to the layout. As described previously, this connection was simply a DB-25 connector pair, convenient and dependable hardware I had used previously in layout work.
Next came the smoke test. I connected up everything, turned on the power, and then there was both good news and bad news. The good news was, no smoke emerged. The bad news was, neither did any electricity at the track. This is where a multi-meter comes in handy, and I certainly cannot understand how anyone can install, let alone troubleshoot, layout wiring without one. I soon found an open solder joint, and a panel switch oriented backwards (just needed to be rotated 180˚ so the function agreed with the panel lettering).
The correctness of wiring was easy to re-check, because I not only give all feeders a name, and indicate them on a track map, but also identified all wire connections to the DB-25 connectors, by pin number and wire color. This way, any mistake in connecting wires is easily found. Using my digital image of the new panel (and reversing the contrast), it was easy to make this schematic map of feeder names. 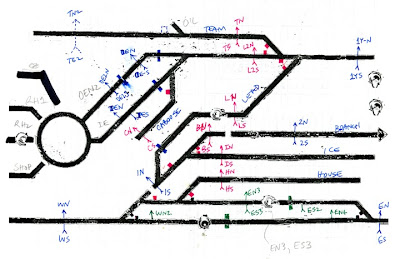 The identification of the DB-25 connector wiring was also crucial, with so many connections involved. Like the map above, this is easy to compile as you go, but would not be much fun to construct after everything was connected. 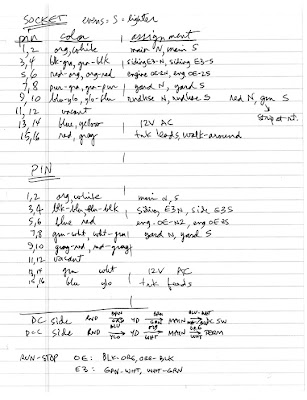 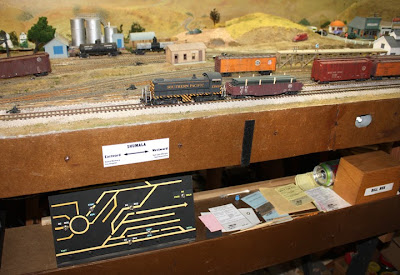 Having gotten this far, and occasionally shaking my head over all the complexities of wiring, I was reminded of the cartoon below. Drawn by Hal Kattau, it appeared in Model Railroader, December 1996, page 173, and is reproduced here with permission from Kalmbach Publishing. 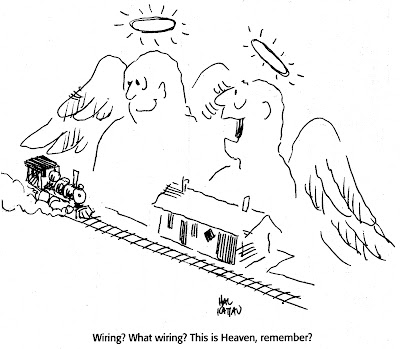 What more can I say? Wiring for those of us not yet in Heaven remains necessary, and for some of us is not especially fun.
Tony Thompson
Posted by Tony Thompson at 6:25 AM