My previous post on this topic was about building storage tanks from scratch, of which I only gave two examples. That post is available at this link: http://modelingthesp.blogspot.com/2013/06/modeling-storage-tanks.html . In the present post, I will say a little about kits for storage tanks.

In the realm of kit tanks, there have been quite a variety over the years, many of them fairly clunky. On the other hand, one of the nicest pieces of storage tank modeling was the Grandt Line bulk oil dealer kit, which is now deleted from their product line, reportedly because the dies were damaged. I have monitored eBay and other sources, hoping to find one of these, but to date have not succeeded. I hope someday to find one.
There are some usable kits out there. One is the Walthers oil dealer, which has surfaced in a couple of variations (Interstate Oil, McGraw Oil) but is intermittently available. (Such kits are produced in “runs” from time to time, so if not currently on the market, wait awhile.) I feel sure the kits will be available in the future, as this kind of industry is a staple of model railroad layouts, and rightly so.
Here is the Walthers photo of the McGraw dealer (from the kit box), which has small brick buildings for its office and pump house, not a very likely kind of small building in the Far West. But that’s not a problem, as these brick structures can be used for other things, and the storage tanks adapted as needed. I have additional comments about the McGraw kit components below. 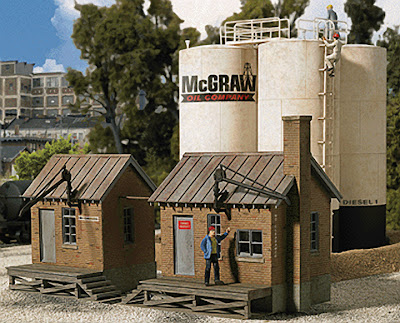 In HO scale, using the standard formula for a cylinder and the fact that there are 231 cubic inches per gallon, one can determine that each of the McGraw tanks is 28,300 gallons in size, if built as intended with four sections in the height. This could readily accommodate deliveries in 8000-gallon or 10,000-gallon tank cars.
The Interstate Oil kit from Walthers has three horizontal and two vertical storage tanks and some unloading and other piping, all of which is useful, but it has an odd curved-roof structure serving as warehouse and office. Again, that building can be repurposed or modified (for example, with a simple peaked roof) to a more realistic regional look. Changing it also removes the obvious visual cue that you just used the Walthers product instead of matching to any prototype. The photo is from Walthers’ web site.

There have long been the Williams tank kits, and these too are sometimes not available, other times on the market. The tanks are pretty nice, their drawback being the vertical seam created by molding the tanks in two vertical halves. The kit I refer to here is Williams no. 501.

The three Williams tanks are each about 4.75 inches high and 2 inches diameter. This corresponds to each unit being a 42,500-gallon tank. That represents multiple tank-car loads and would thus not have to be refilled too often.
The contrast in tank size between the Walthers McGraw Oil tanks, and the Williams tanks, is considerable. A modeler may wish to choose an appropriate tank size (and of course can easily scratchbuild whatever size is desired, as described at the link cited at the top of this post), or mix sizes.
There have long been nicely done storage tanks in the Campbell Scale Models line, in their “Quincy” series. There is a kit for a pair of vertical tanks, and for a pair of horizontal tanks. You can see their current catalog at: http://www.campbellscalemodels.com . This long-time kit manufacturer has been located in Central Point, Oregon since 2004. The kits are no longer bargain prices, in my opinion, but these tanks do remain an alternative to plastic.
For a time, Chooch offered a bulk oil dealer, which I have built. I will not discuss it in this post, but will offer comments on how I modified it, in some future comments on oil dealer modeling.
Let me return to the McGraw tanks, of which I have a set. These are molded to indicate weld seams on each tank segment, though these seams are immense, over two scale inches high, from which most welders would recoil in horror. I simply carved them off with an Exacto chisel blade and sanded smooth. Then I used Archer rivets, set 88025, to place rivet rows where the seams would be. One could also scribe a line to suggest a plate edge for an overlapping seam, but as these tanks will be some distance from the front of the layout, I didn’t think it would be needed.
As seen in this view, I just used two segments of the McGraw tank pieces to make this shorter tank. This is an interim view; the tank will be painted later. (You can click on the image to enlarge it.) 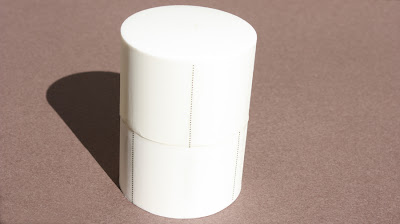 Another option from Archer is a resin weld bead (set 88018), a little ragged and perhaps a little oversize for HO scale, but nothing like the size of the original Walthers ridges. I tried these on alternate sections of one of my tanks. Here is the unpainted view, and you can probably see that although the Archer weld beads (black) are comparable in width to those molded on the Walthers part, they are considerably (and realistically) more shallow in height. 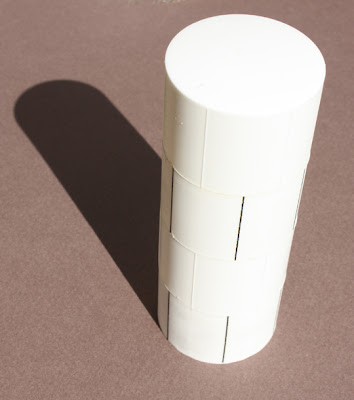 The obvious use for many storage tanks would be to model bulk oil dealers, but they can also be used for other storage applications, such as company fuel or chemicals. I will have some of that type on my layout also.
Tony Thompson
Posted by Tony Thompson at 10:03 AM

Email ThisBlogThis!Share to TwitterShare to FacebookShare to Pinterest
Labels: Structures