I recently posted a description of the tank car fleet of the Associated Oil Company (at: http://modelingthesp.blogspot.com/2014/02/associated-oil-company-tank-car-fleet.html ). That description was intended only as an overview of the fleet, both while it was operated solely by the Associated Company, and after Associated’s merger into the Tidewater Associated Oil Company, which became complete in 1936. For the historical background of this merger and the companies involved, I have written a summary post, available at: http://modelingthesp.blogspot.com/2013/12/associated-oil-company-background.html .
I recently heard from Tom Dill in Oregon, letting me know he had a slide of an Associated tank car, taken on the Quincy Railroad in California about 1956. With his permission, here is that image, conforming entirely to my description of the paint and lettering of Associated cars in this period (see Part 1 on this topic, cited in the first sentence above). It's an 8000-gallon, three-course tank, with an underframe which is an American Car & Foundry Type 25. Note the 3-29 reweigh date, the same as the built date, though the tank specification is stenciled as ARA Spec III (superseded in 1927 by ICC specifications, but stenciling on this point is not always accurate). The placard is an “inflammable” placard, so the car is evidently loaded. 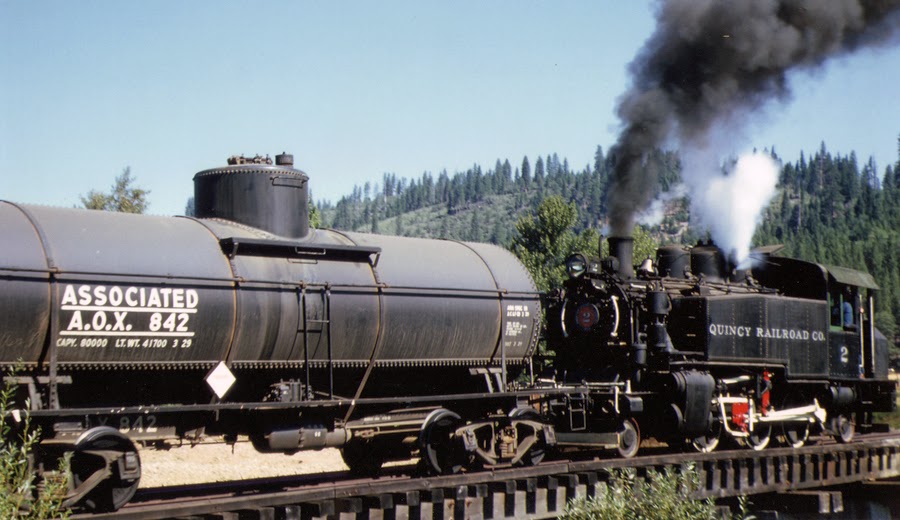 The Type 25 underframe is essentially a Type 21 without side and end sills, so could be kitbashed from one of the commercial AC&F tank car kits, a project I am now planning.
One of the noteworthy features of the Associated car fleet was the 300 cars of Common Standard Class O-50-2, received in 1906. Most of these cars were gone, sold back to SP or otherwise disposed of, by the early 1920s, but a few continued in use. There were still two of those cars listed in the Official Railway Equipment Register for 1953, when I model! I showed a photo of an SP Class O-50-2 car in my post about the Associated fleet, cited in the first sentence, above.
I had never seen a photo of one of those cars in service, however, and recognized that such a photo might not exist. But in Tom Dill’s photo collection there is an image which proved me wrong. The photo was taken, I am pretty sure, to record the locomotive at the head of the train, Extra 5010 East, one of the huge, noteworthy 4-10-2 three-cylinder engines purchased by Southern Pacific during 1925 to 1927. The entire image, taken at McCredie Springs on Oregon’s Cascade line, looks like this.

At the right edge of the image are two tank cars, and the further one is an extraordinary sight: one of those distinctive Common Standard tank cars, in Associated service. Here is an enlargement; you can click on the image to enlarge further. 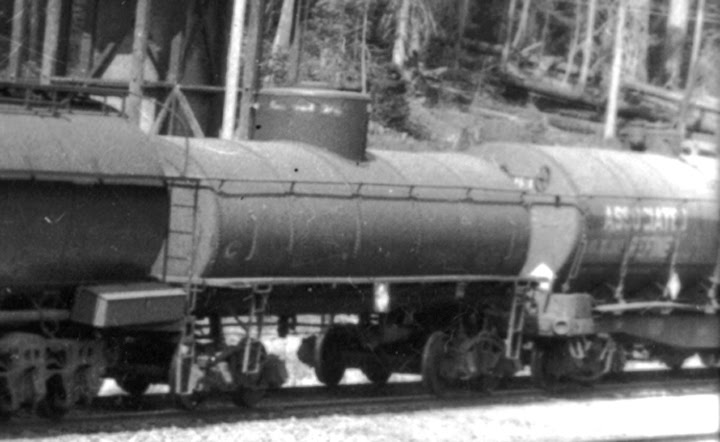 I can’t make out a car number, but the “Associated” name is quite clear.
This does document one of these cars in Associated service, and the photo can be no earlier than 1925, when engine 5010 was delivered, by which time there were rather few of the old 12,500-gallon cars still on the Associated roster. Such a car cries out to be modeled, but there is no brass or plastic car of this type available. One possible stand-in, though, is the CS-25A tank car made in HO scale brass by Westside years ago, a somewhat similar-looking car. I will have to think further on this.
Tony Thompson
Posted by Tony Thompson at 11:44 AM