Southern Pacific marked mileposts along its routes, ordinarily by a number sign, giving the miles distant from San Francisco. This sign was mounted on the telegraph pole nearest to the milepoint, if that was convenient; otherwise a separate wood post would be used. There is a standard drawing for these signs, printed in Volume 2 of the Southern Pacific Lines Common Standard Plans series (Steam Age Equipment Company, Dunsmuir, CA, 1993), which I reproduce below. The numerals are the Egyptian characters standard for SP signage; a drawing for those characters is included in the same Volume 2 just cited. 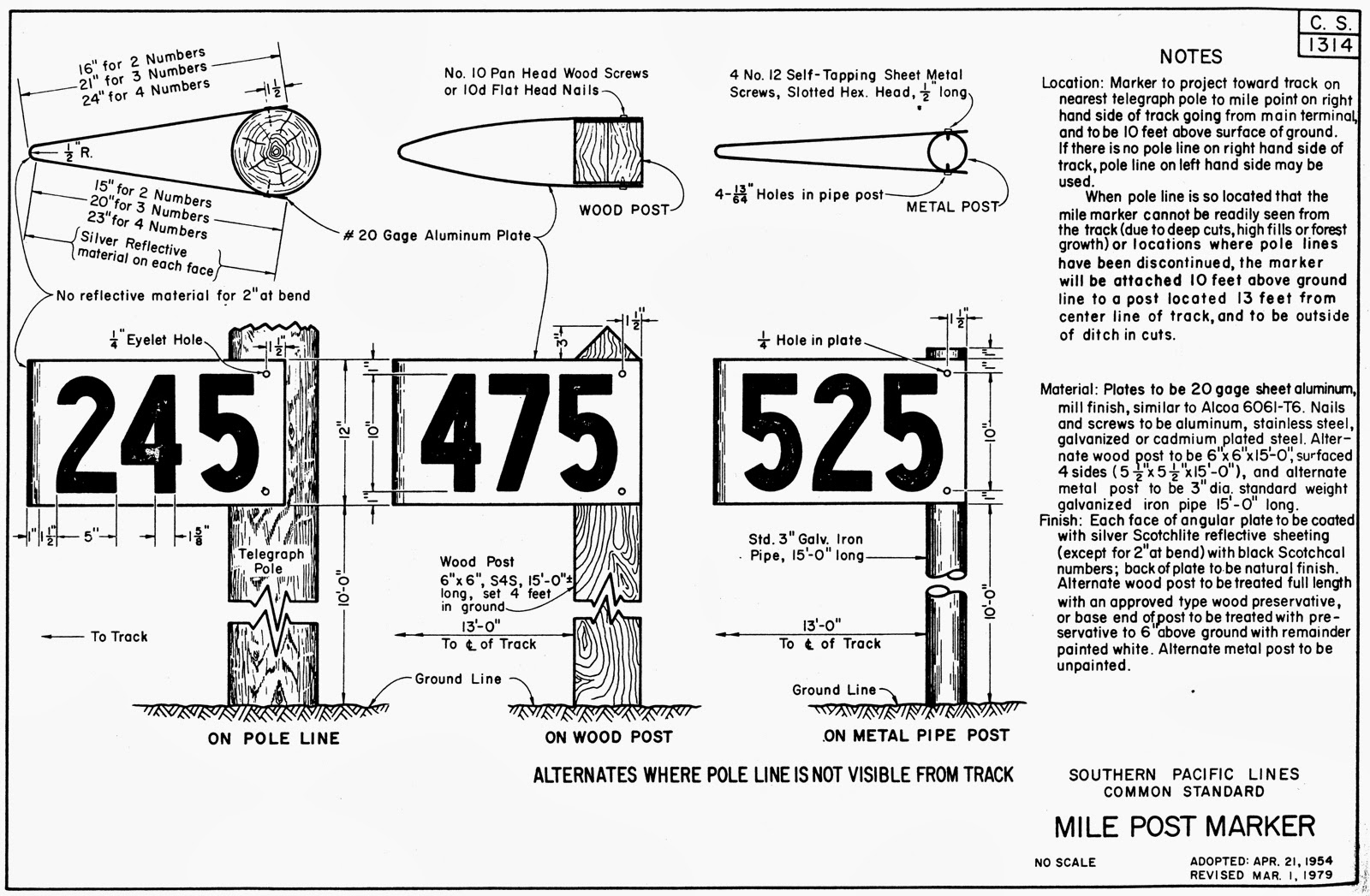 A number of details in this drawing are interesting. Note that a two-sided sign was the normal arrangement, and is shown at upper left attached to a telegraph pole. This drawing has a 1979 revision date and thus does not mention sheet-steel signs, but signs of that type, with impressed numerals, were once common on the SP.
My layout in Pittsburgh, PA included both the depot and turntable at San Luis Obispo. Years ago, I was approached at a convention of the Southern Pacific Historical & Technical Society and asked if I would be interested in purchasing the SP milepost sign for San Luis Obispo, mile 252. I immediately asked, “how did you come by it?” and was told, “never mind that, do you want it?” The price was pretty reasonable, so I said yes, figuring I could take care of it, and eventually donate it somewhere. Now that a railroad museum is opening in San Luis itself, I believe the sign needs to go there.
The telegraph pole which the 252 sign was mounted was adjoining the Signal Dept. building across from the San Luis depot. Here is an Alden Armstrong photo of that building in the early 1950s; the white-painted milepost pole can be seen toward the left edge of the image, and the mile sign itself is just visible at the top of the white portion. The signs were mounted 10 feet above the railhead, and the mounting post was painted white to that height. 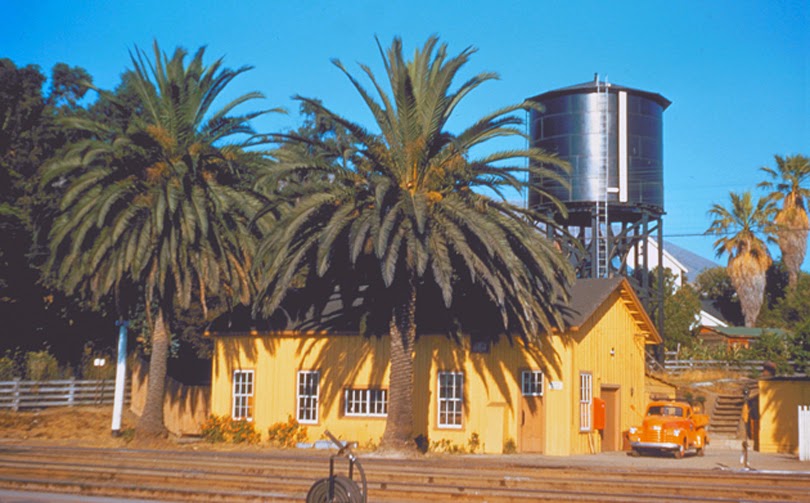 Below I show a photo of my son Campbell holding the San Luis 252 sign itself. Its dimensions evidently represent an earlier version of what is called out on the drawing above; its numerals are 6 inches high, the sign 8 inches high. You can see the two sides of the steel sign, which is porcelain enamel white with black Egyptian numbers on the outside, and some rust staining from the nail holes. 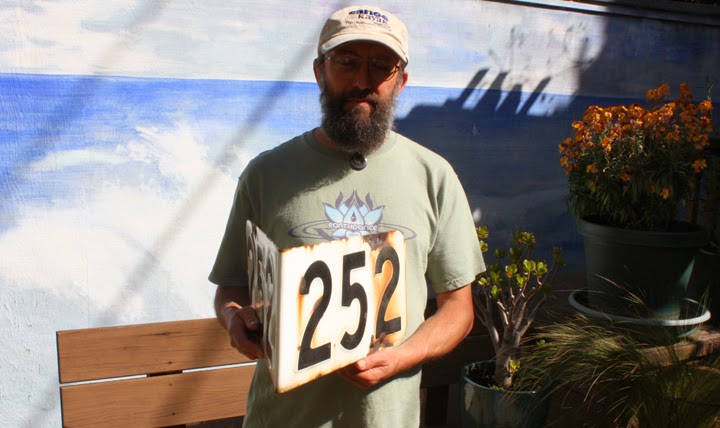 The impressed numerals are evident in this view of the inside of the steel sign. 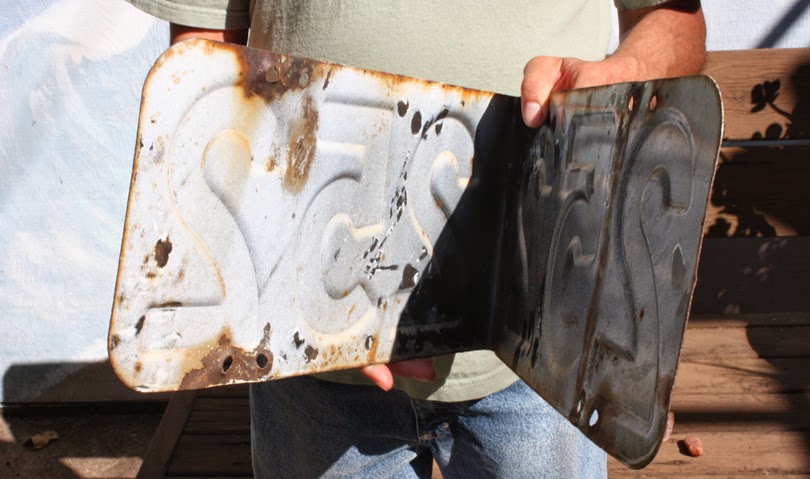 My layout location of Shumala is just beyond milepost 270, so that number was the one to mount on a model telegraph pole just west of the depot and the Chamisal Road crossing. The location, near a section building, is the same as shown in my previous post about speed signs (you can read that post at this link: http://modelingthesp.blogspot.com/2014/03/speed-signs.html ). I chose to use the slightly larger sign dimension shown in the drawing at the top of this post, that is, a 12-inch sign height, which amounts to almost exactly one-eighth of an inch when reduced to HO scale. I just reduced the digital Egyptian numerals of the sign to that size and printed it on paper. Here is the result. 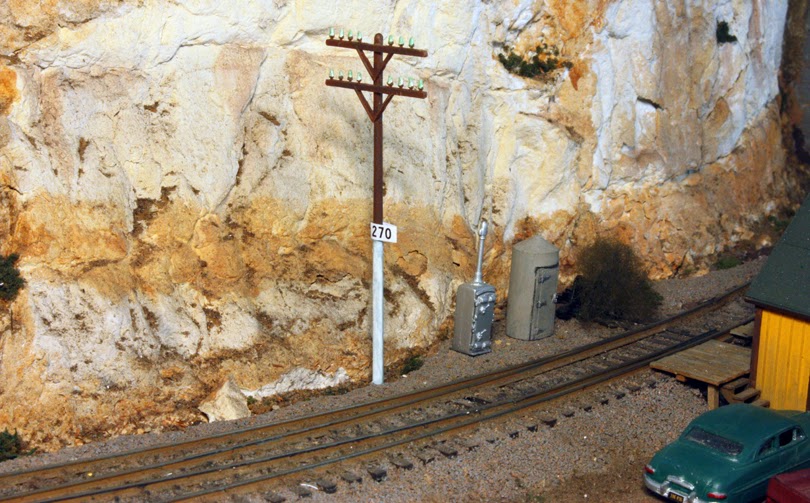