In the days before there were very many insulated box cars, that is, before the middle 1950s, the need for insulated car shipments was met with conventional refrigerator cars which were simply not iced. A few shippers which had such needs skipped the ice bunker construction altogether and built what were called “bunkerless” refrigerator cars, since they lacked only ice bunkers compared to other refrigerator cars. The ARA and later AAR classification for these cars was RB, the “B” standing of course for “bunkerless.”
In fact, insulated box cars continue to be various RB subclasses. Here is a 1959 example, photographed by Pacific Car & Foundry at their plant in Renton, Washington; the car is an RBL class, SP’s first 70-ton box car (SP negative N-6346). You may click on the image to enlarge it. Doesn’t look much like a reefer, does it? 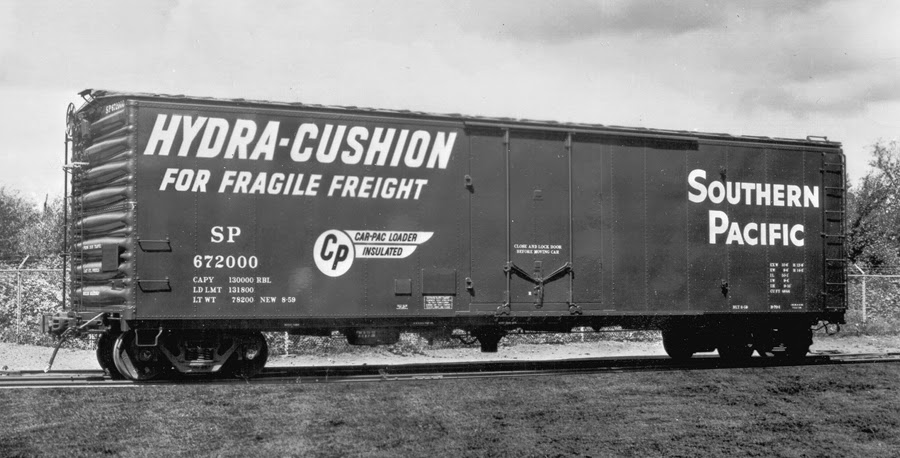 This insulated-car idea goes way back in time, certainly to the 19th century, when such cars were often listed as “beer and ice” cars in Equipment Registers, referring to their common cargoes. The cars were insulated just like refrigerator cars, but without ice hatches on the roof. The earliest ones had sliding doors like box cars, but soon they were being built with hinged side doors, like other reefers. Here are a couple of examples.

This Klausmann Brewing car, with a home point at Cairo, Illinois, dates from the 1890s and is even lettered as a beer and ice car. Note the non-standard ladder next to the sliding door. The photo is from the Kyle Wyatt collection. In later years, it became uncommon to identify the cargo by lettering on the outside of the car, in hopes of reducing pilferage.

This kind of car continued to be built, though in small numbers and primarily for beer shipping. In use, beer shipments in these bunkerless cars were accomplished by loading kegs and barrels inside and adding a layer of “top ice,” shaved ice blown over the cargo. But most private car owners and leasing companies preferred to build the more versatile regular refrigerator car.
The RB cars were not all for beer. Some shippers of food products also used bunkerless cars. An example is H.J. Heinz of Pittsburgh, which rostered both regular ice reefers and bunkerless cars. Here is an example of the latter, in a detail of a photo from the Al Westerfield collection.

Though not common by the 1950s, these kinds of cars did still exist. Among the main owners at that time was Anheuser-Busch of St. Louis, brewers of Budweiser beer, whose Manufacturers Railway Company was a wholly owned captive switching service for the brewery, and whose St. Louis Refrigerator Car Company owned the RB cars for beer shipping. This 1948 Anheuser-Busch photo shows the new 1947 paint scheme on the white-sided cars, with an enlarged emblem and a maroon stripe along the bottom of the car side. Note the word “beer” is nowhere in evidence!

Note how large is the company name to the right of the door. I’m sure the St. Louis Refrigerator people were tired of their reporting marks, SLRX, being confused with Swift meat cars, which had the mark SRLX. Just visible at right is SLRX 3359.
The SLRX fleet was dominated by cars originally built during 1911–1913, either with truss rods or deep fishbelly center sills. Many of the cars were refurbished or rebuilt over the years, and in the early 1950s there were about 300 of the fishbelly center sill cars, while there were only about 100 of the truss-rod cars (with steel center sills added after 1930). I wanted to model one of the fishbelly cars, which were in the 3100–3300 number series.
Many bunkerless cars, including the SLRX cars, were 36 or 37 feet long, and  could be modeled from a meat reefer by building the deep center sills and omitting ice hatches. A better approach probably is a correct kit. Sunshine Models once offered a kit for the SLRX cars, kit 24.28, and I have one of these, built and painted by Denny Williams but with the complex decal application by me. Here is the unweathered car side, to show the lettering to best advantage. The absence of ice hatches on the roof is evident.

Once fully weathered, the car was ready to go to work on my layout. Here it is shown passing in a through freight train. 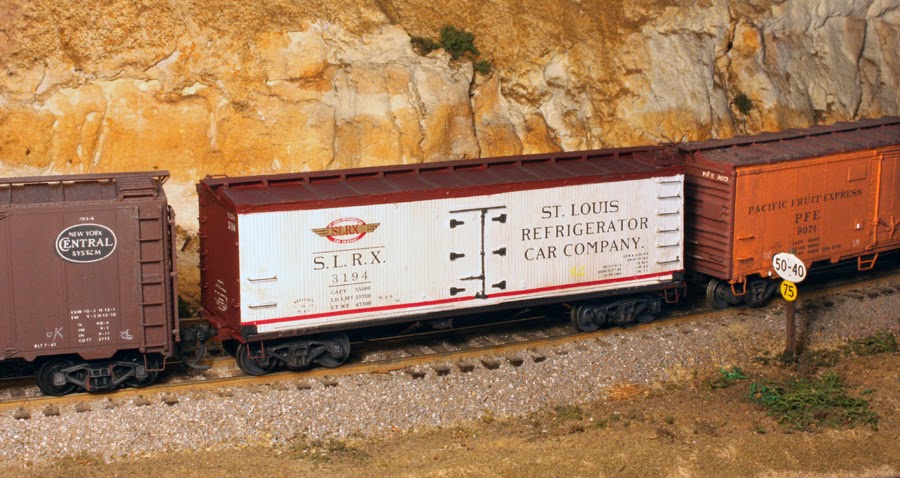 At right is a Southern Pacific speed sign. I’ve discussed the design and construction of these in a separate post. If you’re interested, you can read it at the following link: http://modelingthesp.blogspot.com/2014/03/speed-signs.html .
I don’t have a beer distributor on my layout, so the car will be restricted to mainline use, but is a distinctive car for any train.
Tony Thompson
Posted by Tony Thompson at 10:32 AM