From time to time around the country, local layout owners get together and organize an operating weekend, when invited or signed-up guests operate on the various layouts. These weekends range from fairly small numbers of people, to pretty large groups. Over May 29 to June 1, there was such an event in Southern California, called SoCal Ops. This group had hosted their initial event in 2012, so this was the second time around.
I had attended in 2012 and greatly enjoyed myself, finding the layouts to be excellent and the event well organized and well run. So when I received information that it was about to be held again, I signed up at once. As before, there were some Bay Area car pools organized to drive down and back; I rode with the same group as in 2012, Mark Schutzer, Seth Neumann, and Sam Romerstein. Most  of this group did the same layouts each day, simplifying transportation to and from the hotel in Simi Valley.
On Thursday, we operated on Gary Siegel’s outstanding L&N layout in the Santa Barbara area. It has been well covered in the hobby press, so I won’t say more, but it is always a privilege just to see, let alone operate on, this beautifully scenicked and operationally interesting layout. We had a great time, the weather was perfect, and Gary provided a superb lunch. Hard to beat that.
On Friday we operated on Jon Cure’s layout. It is freelanced, on the basis that the Southern Pacific standard-gauged the Carson & Colorado, creating a line from Mojave through Bishop, California, and on through Mina and Luning, Nevada, to a junction with the Overland Route, either westward to Reno or eastward via Battle Mountain. It is set in the 1980s, more or less, though some more modern equipment does show up. Jon’s layout is to me a magnificent creation, with perhaps only adequate (though complete) scenery but really outstanding complexity and challenge of operation. It has close to flawless track and electrical performance. I love this layout, where I have operated a few times before, and once again, got a great operating job (the Hauler train) and had a great time. I will just show one photo. 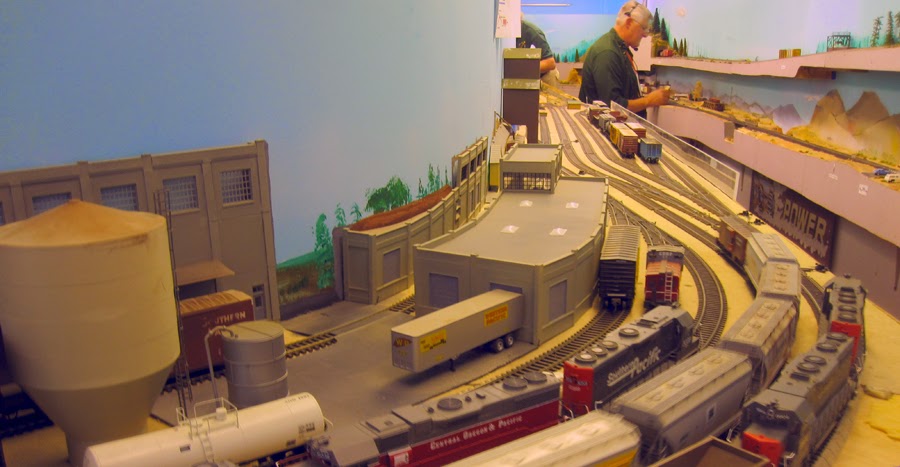 This is looking up the aisle across Bishop yard, toward Owenyo, where Jim Providenza is switching the Bishop Turn. In the past, I have run that Turn, and have also done the Bishop Yardmaster job, both excellent challenges.
On Saturday, we went to Mark Lestico’s N scale layout in the Whittier area, modeling the UP’s Cascade Subdivision in essentially the present time. We were all pleasantly surprised at how well everything worked (this is not universal in N scale), and were particularly impressed with Mark’s scenery work. Here is his representation of Salt Creek trestle in Oregon, with Highway 58 passing beneath. The train on the trestle is the stack train I was operating. 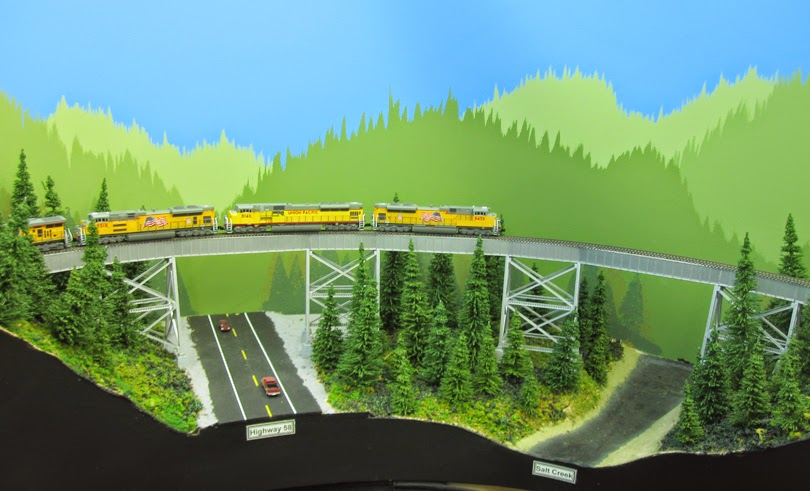 The simplified backdrop treatment was most effective, as was the black fascia.
All trains were staged in a double-ended staging yard, called Portland/Roseville, representing the two extreme ends of the trackage. Here is a view of that yard on the right, with Eugene yard on the left. Ray deBlieck is studying his paperwork, with Jim Providenza behind him, bringing a train out of the Roseville end of the yard to begin a run over the railroad, and in the background is layout regular Ray Eiser. You can see the limited aisle size, the only thing I could even think of criticizing on this outstanding layout. Note the suggestion of downtown Portland on the backdrop at right.

I admired many things on this layout, not least the very clear and helpful graphics on the fascia around the layout, showing you at each town what the various switching tracks were. Here is the one at the big Weyerhaeuser lumber mill in Springfield, Oregon. 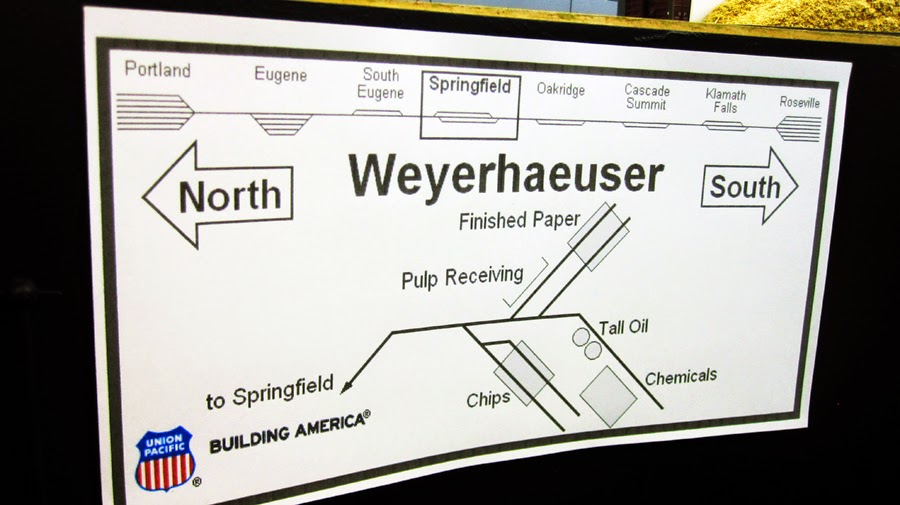 Note the layout schematic across the top, to remind you of where you are, and the clear labeling of all tracks in the mill.
Mark also took photos of us operating, and if you’re interested, there are a bunch of photos of our whole crew on his web site, at this link:
http://www.macrodyn.com/ldsig/wiki/index.php?title=Cascade_Subdivision_-_N_-_Mark_Lestico_-_page_10
On Sunday, we operated on Paul Catapano’s Atlantic Inland Railroad (pretty much channeling the Western Maryland), and I had a great job with intensive switching, the Littlerock Commercial job, and let me tell you, I moved a heck of a lot of cars out of and into all the industrial sidings. Great fun, and a good finish to a terrific weekend. Thanks to all the layout owners who hosted us, and to Al Daumann for once again organizing and running SoCal Ops.
Tony Thompson

Posted by Tony Thompson at 9:39 AM