My opening post in this thread about the Mutual Oil Company explored its history, and the 1920s absorption of the Mutual tank car fleet into the car fleet of its purchaser, Continental Oil Company. (You can read my post at: http://modelingthesp.blogspot.com/2014/06/the-mutual-oil-company-and-its-tank-cars.html ). I opened that post with a photo of an InterMountain tank car decorated for Mutual Oil.

I confess to an impulse purchase of this model, and this is how the model looked, out of the box. I photographed it from a high angle to show the lettering to best advantage, but there is a side view in the previous post.

The lettering below the company name on the right (shown in the previous post) identifies the headquarters of Mutual as located in Kansas City, Missouri, and lists the location of Mutual’s refineries, in Glenrock and Cowley, Wyoming, and Chanute, Kansas.
I naturally wondered what I might be able to find out about Mutual, and whether or how I could use the car. That was the stimulus for the previous post, to understand Mutual’s history, and it was very clear that Mutual was absorbed by Continental in 1924, and the tank cars relettered over the following five years. But I model 1953, so what now?
Obviously I needed to decide what to do with the model. I could see three options: to repaint the car entirely and reletter, since Mutual was long gone by 1953; to sell the model as-is, same reason; or to represent it as a “patched” car transferred from MOCX to CONX. I think it is unlikely, though perhaps possible, that the car would not have been entirely repainted by 1953. However, old tank cars often remained in service for many years without repainting, so I decided to choose that third option.
My first step was to overspray the model with Dullcote, then weather in my usual way with acrylic washes, to make the entire car fairly dirty. (For a link to a joint clinic handout about this acrylic weathering method, you may go to: http://modelingthesp.blogspot.com/2011/10/weathering-clinic-handout.html .) I then painted out the reporting marks on sides and ends with black paint, and applied new reporting marks, CONX, in a slightly different lettering size and style. I used an old Champ alphabet set called “Modern Gothic.” All other lettering, including car number, was left alone. The intent was to suggest that Continental, upon acquisition of the Mutual cars, simply re-marked them without repainting the entire car. As I stated, this is not really likely, but perhaps just possible.
Once this was done, I again applied a layer of weathering to the entire car, thus making the old paint even dirtier. In this regard, I take the point Richard Hendrickson often makes, on the basis of many prototype photographs, that it is difficult to over-weather an older tank car for any era prior to perhaps 1960. And the goal here was to make the original Mutual lettering all but unreadable, though this second weathering layer did not quite get to that point. 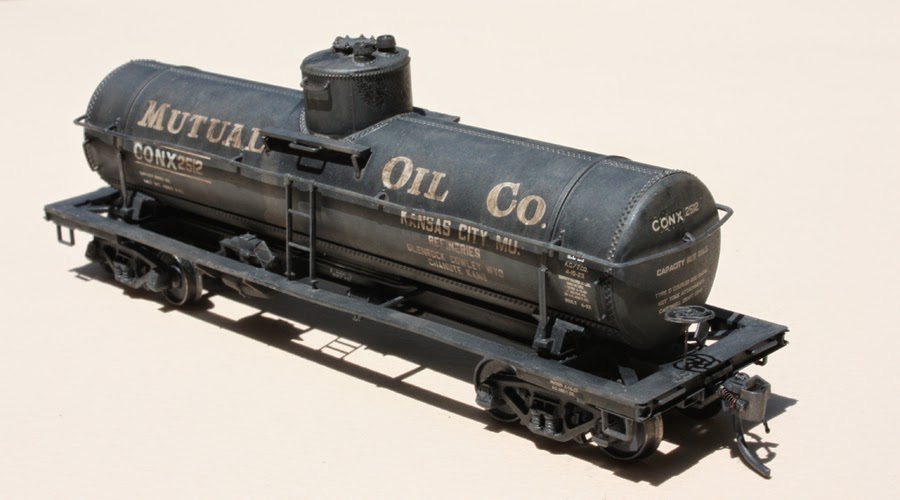 Here the bold lettering is substantially dirtier and muted, compared to the “new” photo above, but is still more evident than I want. The CONX lettering looks about right here.
Next I again applied a third overpainting of acrylics to dull the “Mutual” lettering further, added chalk marks and route cards, and produced this effect. 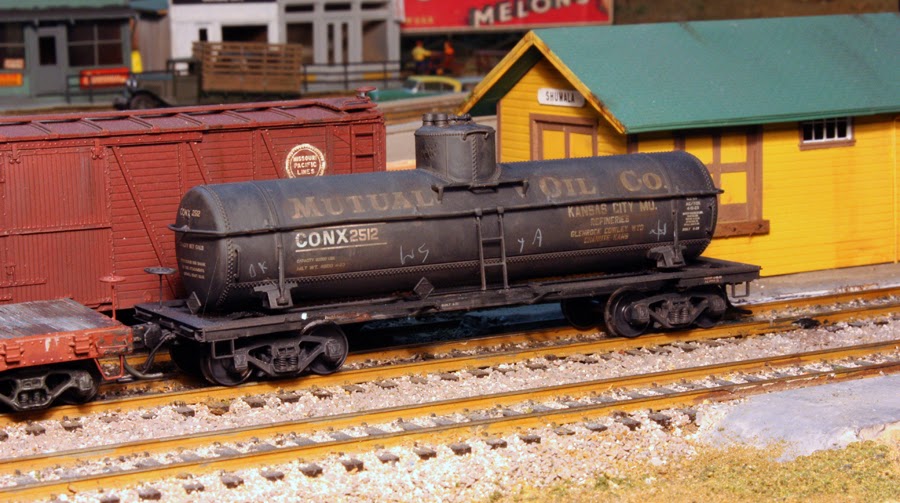 This is pretty much what I wanted.
What might the car have looked like if Continental had repainted it (which as I said was much the most likely outcome)? Here is the 1930s paint scheme, again from the InterMountain website, showing a newly-announced scheme on their 8000-gallon Type 27 car.

So if you would prefer not to stretch probability as far as I have done, this is perhaps what would be better.
The exercise of representing a car which was purchased and re-lettered only with reporting marks was interesting, as was learning some of the history of Continental. If you haven’t tried much research like this, I recommend it. You might find, as I do, that it can be fun as well as informative.
Tony Thompson
Posted by Tony Thompson at 4:04 PM