A while back, I presented three posts relating to Southern Pacific passenger operations, as they could be operated on my layout. I began with some introductory material about the prototype Coast Line trains (at this link: http://modelingthesp.blogspot.com/2012/10/choosing-model-sp-passenger-cars.html ), and then went on to provide photos and a description of options for modeling the SP head-end cars I would need (you can find it here: http://modelingthesp.blogspot.com/2012/10/modeling-sp-passenger-cars-head-end-cars.html ), and concluded with a discussion about the various painting colors and decal lettering options for these models (it can be found at: http://modelingthesp.blogspot.com/2012/11/modeling-sp-passenger-cars-coast-mail.html ).
Although I didn’t mention it in those preceding posts, there are a couple of kinds of head-end cars that really are only formally passenger cars. These are express box cars, and express refrigerator cars. Both can be found in photographs of the “Coast Mail,” as the primary mail train on the Coast Line was nicknamed, so I need to model them. The present post takes up the express box cars. For more information, you may wish to consult the Southern Pacific Historical & Technical Society Volume 3 in the series on Southern Pacific Passenger Cars, or their book on passenger painting and lettering. Both still available on their website. Volume 3, Head-end Cars, can be found at: http://www.sphtsstore.org/servlet/the-Books/Categories and the painting and lettering guide can be ordered at: http://www.sphtsstore.org/servlet/the-Books/s/17/Categories .
The box cars are also covered, though not in as much detail, in Volume 4 on box cars, in my series Southern Pacific Freight Cars (Signature Press, 2006), now back in print as a revised edition (2014) with additions, corrections, and eight more pages.
In the year I model, 1953, the Coast Mail train was still numbered 71 and 72, its only official name was Passenger, and it remained steam powered. It was common though not universal to see an express box car or two on the head end of the train. Broadly speaking, SP owned two groups of these cars. The best-known group is the 50 cars built as part of the order for the 1946 “Overnight” cars, Class B-50-24, in the famous black paint scheme. Of the 500 total cars built, 450 were those black cars, but the balance were equipped for passenger service and painted Dark Olive Green, like practically all other SP head-end cars of the time.
There are some interesting details about these cars. Delivered with ASF A-3 “Ride Control” trucks, in 1949–1950 20 of them were equipped with the Allied “Full Cushion” trucks which SP had purchased in 1940 for caboose service. But with other railroads refusing to accept cars with these trucks, the Allied trucks were removed by the end of 1950. Thirty of the cars still had the A-3 trucks, but the 20 which had had Allieds now got passenger-style General Steel Castings outside-equalizer trucks, cars no. 5700–5713 and 5735-5740.
There was a fine Sunshine Models kit for these express cars, and Beaver Creek did the same cars in brass. Beaver Creek supplied three kinds of trucks (see previous paragraph) and offered three different paint schemes, including the Dark Olive which I wanted. My Beaver Creek model is no. 5749, so it has A-3 trucks.
Here is a photo of the car. I have been trying to get a kind of faded look, which shows up all right on the car sides, but the roof has come out dirtier, so probably I will experiment with additional weathering on car sides. The car is shown in the eastward mail train, No. 72, holding in Shumala siding behind a Pacific. 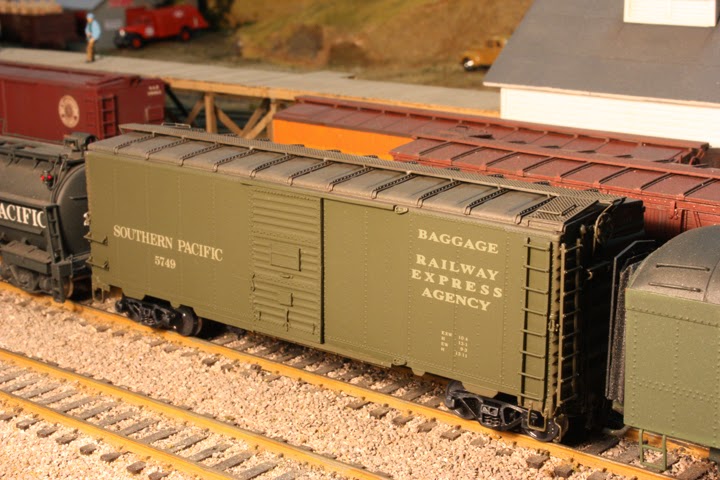 There is a second group of express cars, gone or almost gone by 1949, for which I will require a modest time warp to operate occasionally in a 1953 train. These were the cars of classes B-50-15 and -16 which had been steel-sheathed for “Overnight” service prior to World War II, and about 100 of which received passenger-operation equipment such as steam and signal lines, and were repainted Dark Olive Green. Sunshine Models offered numerous versions of the Class B-50-15 cars, including the express box car version, kit 38.25. I acquired one of the kits, Dennis Williams built it for me, and I applied decals and weathering. I suspect these cars were not often washed, if washed at all (unlike most SP passenger equipment in that day), because most photos show them pretty grimy. This photo shows my B-50-15 car in westward No. 71, passing Shumala depot.

Here the train is powered by P-4 Pacific No. 2405.
That concludes what I want to say about express box cars. I don’t intend to run them at the head end of my mail train on every outing, but occasionally they will offer a contrast to the rest of the consist.
Tony Thompson
Posted by Tony Thompson at 1:16 PM