Freight operations: mileage, per diem and all that

One of the topics I know can be confusing to modelers trying to learn about freight car distribution and operation concerns the charges levied for use of foreign freight cars. (“Foreign” means not owned by the railroad on which the car is located.) There are two kinds of such charges, called "mileage” and “per diem.” The mileage charge is so much per mile, for all movements of the car, and is typical for privately-owned freight cars (more on the details in a moment). The per-diem charge is so much per day that the car is on a railroad’s rails, moving or stationary, and the name of course is simply Latin for “per day.”
Back in the early 20th century, there were many varieties of charges for car usage, but the idea of mileage came into acceptance, and there were a variety of rates, often quite small (fractions of one cent) per mile. Per diem was also variable and usually well under a dollar a day in the U.S. But from the 1920s through the 1930s, per diem was famously “a buck a day.” It finally began to rise after World War II, and by the year I model, 1953, had risen to $2.00 a day. By the way, you can look up the per diem rate for any year in the Code of Per Diem Rules, which was printed in the back of every issue of the Official Railroad Equipment Register or ORER.
In those years, the Association of American Railroads (AAR) would from time to time consider whether increases were needed, and if so, would set a new rate, which would be voluntarily accepted by the railroads. During 1953, however, that changed, because an AAR recommendation to increase the rate from $2.00 to $2.40 was not accepted by Eastern railroads, who instead continued to pay per-diem bills at the $2 rate, while everyone else paid $2.40. This naturally led to court fights and extensive hearings, etc., which led to various complications that I won’t go into. Eventually, the “per diem” became an hourly rate, thus eliminating the notorious “midnight shove,” in which you tried to get as many foreigns as possible off of your rails and onto a connecting railroad’s rails before midnight (and of course your connection was striving to do the same to you).
Note here that while you were eager to move any per-diem foreign cars off your railroad ASAP, you really didn’t cars if any mileage-rate foreign cars sat around, as long as they weren’t moving.
Mileage was, in some ways, complicated in that the rates varied with car type. In my 1953 era, this was also encapsulated in the Code of Per Diem Rules, and contained in Rule 18. Shown below is the entirety of Rule 18 from the January 1953 issue of the ORER. (You may wish to click on the image to enlarge it.) 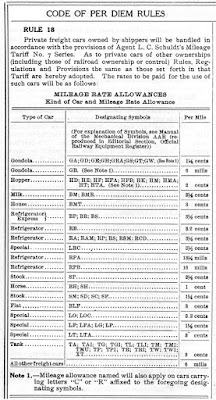 The most common car types in this table are refrigerator cars, the most common varieties of which carried a charge of 3.5 cents a mile, and tank cars, most of which carried a charge of 3 cents a mile. Some cars were charged at less that one cent per mile, for example 6 mills (or 0.6 cents) a mile.
How does this come into model railroad operation? It doesn’t, directly, but it can affect car handling. One reason refrigerator car operators like PFE and SFRD did not care at all about westbound loads, after their cars had been unloaded of their eastward produce shipments, is that the mileage was paid for all reefer movements, loaded or empty. The revenue to PFE or SFRD was identical for a westward empty as for a westward load. (The intervening railroads would have benefited from divisions of the freight rate on westward loads, but that certainly wasn’t PFE’s problem. Even SFRD, though a component of the Santa Fe, was expected to make money in its own operations and, like PFE, was primarily concerned with providing empties to produce shippers in the west. Especially in harvest season, there were often barely enough empties to go around.)
It is certainly only a detail, but knowing how car usage was paid for, whether mileage or per diem, can readily become part of how you conduct model operations on a layout. The complicated one of the two payment arrangements is mileage, and Rule 18, shown in this post, gives all the specifics of that aspect.
Tony Thompson