Last month, I attended the Railroad Prototype Modelers meet in Collinsville, Illinois (St. Louis area), as I described in a brief report. You can see that post at this link: http://modelingthesp.blogspot.com/2017/07/the-st-louis-rpm-meet.html . I mentioned in that post that I had seen some intriguing products at the meet, and in the present post I want to say more about them.
I have already written a separate post about the “headline” new product displayed at Collinsville, which was the new insulated tank car from Tangent. It is the much needed 8000-gallon size, has the much-needed General American underframe, and is another of the superb models we have come to expect from Tangent. My post about those cars can be read here: http://modelingthesp.blogspot.com/2017/06/the-new-tangent-insulated-tank-car.html .) But there were three other noteworthy displays.
First up was an exhibit of a new 3-D printed model, one that has received some discussion on the Yahoo group called Steam Era Freight Cars. (To join that list, you can visit http://groups.yahoo.com/group/STMFC ) This is an unusual prototype, the Denver & Rio Grande Western drop-bottom or GS gondola. The unusual part is that most of the D&RGW GS fleet was 46-foot cars, instead of the much more common 40-foot length, and the cars had a distinctive curved or “offset” side sheet. A model of this car was produced in HO scale brass for W&R Enterprises, but that car was imported in modest numbers, was fairly expensive, and is now hard to find. The new models from Bonsall Scale Carshops is most interesting. Offered are both a 42-foot car (D&RGW 45,000 series) and the 46-foot car (D&RGW 70,000 series), and a coke rack can be added to the car. Here is a photo of one of the models displayed.

I am not aware of a website where these are being sold, but Corey Bonsall has written about the development and printing of the models, at this link: https://forum.formlabs.com/t/ho-scale-d-rgw-gs-gondola-project-with-the-form-2/13293 . I did not manage to find anyone manning the display, but kit boxes were shown, and I believe they can be purchased directly from Corey. If you are interested, his email is coreybonsall@gmail.com .
Another interesting product was a small motor to throw turnouts, a familiar product of course from several manufacturers, but this one includes a connection to also rotate a switch stand 90 degrees when the switch throws. It looked and worked beautifully. It’s called a “Mole II” and has a simple, effective, and small mounting cradle, and is available with the switch-stand rotation option. It is sold by Proto 87 Stores (visit them at: www.proto87.com and do watch the video of this device operating). The photo below, from Proto 87 stores, shows a cross-section of an installation, extending less than half as deep below the layout as a Tortoise machine. 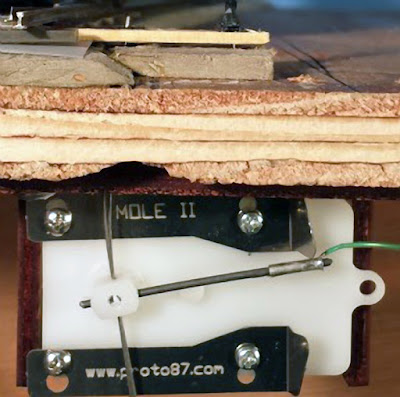 The turnout with switch stand, used at Collinsville for demonstrating the operation of the Mole II machine, looked excellent and as I said, operated very smoothly. Price is reasonable too.

The third product I found intriguing was a decal system for weathering, from Weathering Solutions (you can see much more of their product line at their website, http://www.weatheringsolutions.com/2-uncategorised ). These comprise a whole variety of rust streaks, along with gray and black streaking. The photo below shows part of their display, with a sample car with these decal streaks applied. You can see also the wide variety of sizes and types of streaking offered in this line of decals. 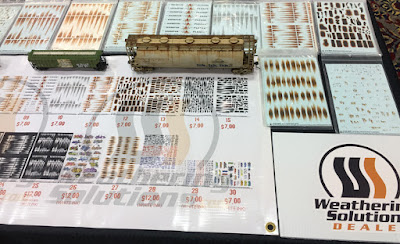 Another example, well suited for modern modeling, is the MoPac covered hopper below, with strikingly vivid rust streaking. (They also offer graffiti decals.)

I bought a couple of sets of these decals, and I am looking forward to experimenting with them on a couple of freight cars. Results will be shown in a future post.
All these products were interesting to me, and the first time I had seen any of them (though some are not brand new to the hobby). I hope some of them may be of interest to you, too.
Tony Thompson
Posted by Tony Thompson at 10:28 AM