The first post on this topic (see it at: http://modelingthesp.blogspot.com/2016/07/upgrading-accurail-brex-reefer.html ) described the background of this project, which is the completion of a model started by my friend Richard Hendrickson. This post continues the story. Richard had stripped off the molded-on grabs and ladders on both sides and ends, as seen in this view of the right side of the model (the left side was shown in the prior post), and had then repainted those areas. 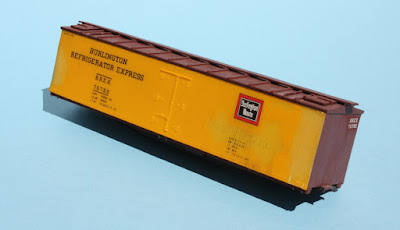 After the roof and underbody work shown in the previous post, I proceeded to add wire grab irons to sides and ends. I like Westerfield brass grab irons for this kind of work and have used them for years. They are attached with a small drop of CA, and will be painted black on the sides, boxcar red on the ends. 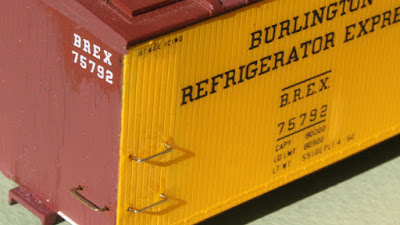 For side ladders, I chose to use the ladders in the InterMountain detail set for box cars. The ladders are actually too tall, but removing one bottom rung from each makes them the right height for the car side, and they then have the correct number of rungs for the Burlington reefer, and match prototype reefer photos. End ladders are one rung shorter. These can be tough to mask when on the car, so I prepainted the side ladders black before applying.
Next came the always interesting challenge of hand-painting the door hardware black. This is not particularly hard, but inevitably a little black gets onto the area that should be yellow. No problem, just take a little yellow paint and cover up the stray black — and oops, some of the yellow gets onto the part that is supposed to be black . . . rinse and repeat until done. But the key, in any case, is to be patient, go slowly, and be careful. My personal successes I attribute to a particular paint brush I have found to be really excellent for this kind of work, a “No. 1 round” from Princeton Art & Brush Company. I also use a slightly finer “No. 0 round” for some parts. Here is the appearance of my car side at this point.

The kick plate under the door still needs to be painted (boxcar red), as do the car ends. As noted previously, some lettering on the right end of the car side has been removed for replacement with more suitable lettering for the period being depicted.
At this point, the major remaining physical work on the car is drilling all the holes for the sill steps. I decided to do that before undertaking any more of the needed detail work, especially the B end brake detail, to minimize handling after details are installed. The same goes for completing the lettering with appropriate decals: best done late in the project. I decided to use A-Line metal sill steps, for which I drill a no. 75 hole using a pin vise. Once inserted, the steps are secured with CA. Here you see them glued in place, but in unpainted form. 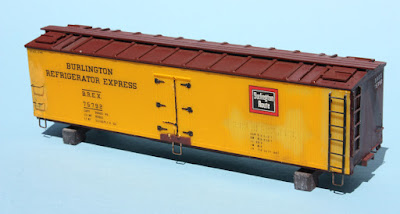 The car here is resting on support blocks in place of the trucks, a convenient arrangement, as I have shown and explained in a previous post (you can see it at this link: http://modelingthesp.blogspot.com/2014/11/interim-truck-support-blocks.html ).
Richard had removed the B-end brake platform entirely. This was a good idea, because the actual BREX brake platforms were wide (see the prototype photo in the first post in this series, link at the top of the present post). The Accurail molding has an opening to insert a tab of the platform, so I decided to retain that arrangement. A piece of 0.020 styrene was cut to fit, with a tab extending into that opening. Supports under the platform remain to be added. 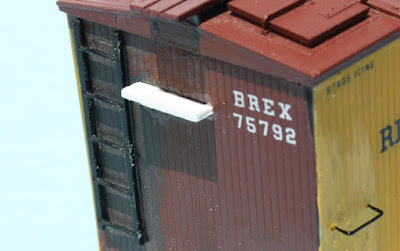 Though the photo doesn’t show it, the platform has been drilled for the vertical-brake wheel staff, of 0.015-inch brass wire.
The project continues to move forward, and I will show completion of the car, including completion of lettering, in a future post. As the year moves forward, harvest season is not far away, and I will need this car to supplement the PFE reefers on my layout, just as the prototype did.
Tony Thompson
Posted by Tony Thompson at 12:45 PM