I have described previously some of the interesting products (new to me, if not entirely new to the hobby) that I saw at the St. Louis RPM meeting last month in Collinsville, Illinois. (The post about those products can be found at: http://modelingthesp.blogspot.com/2017/07/interesting-products-at-collinsville.html .) A very intriguing product I mentioned was the wide variety of weathering decals from Weathering Solutions. Although I show below some efforts using just one of their decal sets, there are many more to be seen at their website, which is at: http://www.weatheringsolutions.com/2-uncategorised . I show below the advertisement included with their decal sets, which illustrates the range and type of products. 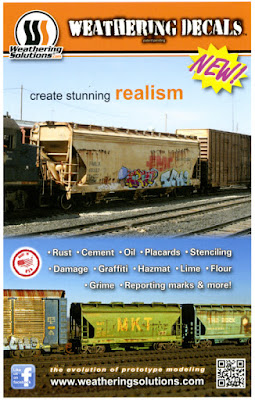 The set I decided to try out was set 1105-SLT, “small rust spots.” In my modeling era of the early 1950s, cars were rarely allowed to get seriously rusty and deteriorated, but instead were likely to be maintained before rusting could get too advanced. Thus I only wanted to experiment with moderate rust markings. Here is the decal set, shown here only to emphasize the really large amount of decal material even in this one set. 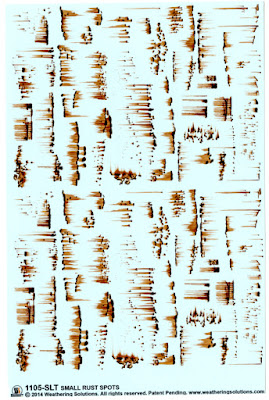 After some thought, I decided that one of my covered hoppers in chemical service might well have suffered corrosion severe enough to have generated the kinds of rust streaks available in this set. Accordingly, I chose one to work on. The model represents a car owned by the General Chemical Division of Allied Chemical, and I described its creation in a post last year (you can see it at; http://modelingthesp.blogspot.com/2015/10/small-modeling-project-gcx-covered.html ). Here is how it looked at the outset.

I thought it might be interesting to do the two sides of the car a little differently, partly to see how well I liked the effects. I put the streaks below the hatches, and on the roof alongside the hatches, and also tried to get some rust right at the base of the hatch. Here is one side of the car, the side with smaller rust streaks. (You can click on the image to enlarge it.)

The decals went on as neatly and simply as any good decal would.
The other side was to have longer and thus more dramatic rust streaks, but similar rusting around the hatches on the roof (after all, whichever side of the car was toward the viewer during layout operation, the entire roof could always be seen). I used longer streaks, though far from the longest ones in this set, and tiny compared to some of the rust streaks in their other sets. Still, this seemed about as radical as I wanted to get on this car.

This is a neat product, a clever idea and well implemented. It no doubt serves modern-era modelers better than modelers of the 1950s, like me, but still offers some interesting possibilities. I like these decals and will be using them on future projects.
Tony Thompson