Setting up my layout for an operating (or “op”) session requires more time and effort than might be evident. Most action on my layout is switching, and I described how I identify industry needs for cars (inbound or outbound) in a post some time back, and I still use the schedules shown there (that post is at: http://modelingthesp.blogspot.com/2011/11/operations-demand-based-car-flow-2.html ). I have gone beyond that basic starting point to describe the general process by which I survey the layout prior to an operating session, and proceed to set it up for the next one (see that post at: http://modelingthesp.blogspot.com/2015/06/how-i-set-up-operating-session.html ). In this post I want to explain a little further.
In the prior posts, I explained the generation of waybill needs, either from existing waybills on file, or newly created ones for specific needs. What I didn’t get into was the criteria for selection of cars to add to an operating session. The key to doing so is a document I maintain that I call the “Master Roster.” It lists all cars I own, including a few still in kit form or awaiting upgrades to enter service. Cars are listed alphabetically by reporting mark, and entries include the AAR car class for each car, the present storage location (these have to be updated periodically), prior op session use, and identity or source of the car, such as “Tangent ready-to-run” or “built from InterMountain kit,” or perhaps “Challenger brass.” I would also add any pertinent comments, such as car class when known, the slogan for railroads like Santa Fe with a range of car slogans, a lessee’s names on tank cars, or refrigerator cars set up for vent service, or any other relevant details.
To illustrate, here are a few entries chosen from the document. The “location” is any one of several storage and retrieval locations in the layout room.  (You can click on the image to enlarge it.)

The abbreviation “RHH” identifies a car inherited from Richard Hendrickson. You can see that this kind of roster, provided it is kept up to date and current at all times, contains good information on the car fleet, and for the present topic, collects information on car use in operating sessions.
So the use of the Master Roster is for locating cars in the place they are stored, as well as giving an idea of prior use. I like to spread the usage around, and see what role I can find for a car not previously used much, or at all. Knowing the inbound and outbound industry needs that have been selected for the upcoming session, I then need to fit cars and their waybills to those needs. Sometimes, of course, the assignment is uncomplicated (Richfield Oil Company tank cars to and from the Richfield dealer on the layout), but free-running cars like box cars are another story. For example, if I need an inbound empty to be loaded at Jupiter Pump and Compressor, and have a C&O box car I would like to work into the session, it may not have a waybill in existence for that industry.
This is where “stub” or overlay waybills become a valuable part of set-up. (For an introductory discussion of this idea, you may wish to read my post at: http://modelingthesp.blogspot.com/2011/08/waybills-10.html .) If that C&O box car already has a pair of waybills in the system, one inbound from a foreign road somewhere, and one which is a Southern Pacific waybill, I can simply add an overlay to that SP waybill, turning a waybill for some other industry into a Jupiter Pump & Compressor outbound waybill. Here is the existing SP waybill for this car: 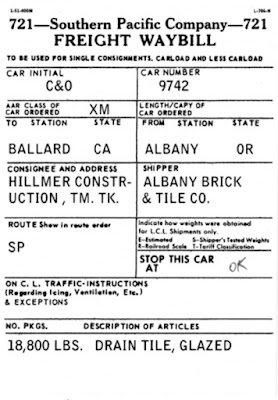 Obviously it’s an inbound load to the Ballard team track, but the important part is the SP header. Turning to my waybill file, I pull out an overlay for an outbound Jupiter load, one that is headed at least somewhere in the direction of home for the C&O box car: 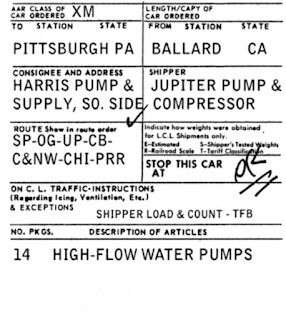 There are some handwritten marks on this waybill, as on most of my bills; there is considerable evidence that prototype waybills typically contained this much handwriting or more. Now when the overlay is added to the sleeve, this is what it looks like to the local freight crew. 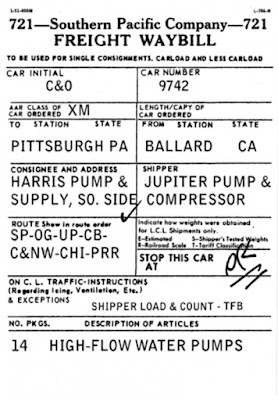 I use this process most commonly with outbound refrigerator cars. That enables me to direct an outbound load from any of my packing houses, with a seasonally appropriate produce load, for any produce reefer in my fleet, because all have at least one Southern Pacific perishable waybill already. Seasonal produce shipping is something I have researched for my layout locale, and which I always make part of planning for any operating session. You can read my post giving background about that point at this link: http://modelingthesp.blogspot.com/2015/09/seasonality-of-crops-and-traffic.html . In fact, my most extensive previous discussion about my ways of employing overlay bills concentrated on reefer waybills (see the post at: http://modelingthesp.blogspot.com/2015/06/waybills-part-41-overlay-bills.html ).
With the range of techniques and approaches presented in this post, I have a couple of kinds of flexibility as I set up each upcoming operating session. This adds to the fun for me as layout owner.
Tony Thompson
Posted by Tony Thompson at 11:26 AM