The title here, about completing a Sunshine kit, might seem lik an odd one. But it reflects a problem that emerged in the last days when Sunshine Models was still in business. Some kits were packed with the very last parts in inventory, and occasionally those parts weren’t quite the right parts. That is what happened with a very late kit I bought, kit no. 87.4, for a General American Type 30 tank car, 8000-gallon capacity, with Rohm & Haas Chemical Company decals.
The problem was that the dome casting in the kit I received did not fit the hole in the tank body, but was substantially too large. Here is a photo of the model, assembled and painted by Dennis Williams.

The diameter of the opening in the tank body is about 0.62 inches, while the dome supplied has a diameter of 0.72 inches, not close to fitting. (The 0.72 inches happens to be the diameter of the Athearn tank car domes.) Probably it is the correct dome for the Sunshine 10,000-gallon tank car. Anyway, after looking without success through all the tank car parts and kits I have on hand, and after asking some of the “usual suspects” who might know where to find the correct Sunshine dome, and striking out, I decided to just make one.
An easy route to a new dome was available. I have a piece of Plastruct tubing on hand, which is nominally 5/8-inch diameter (Plastuct TB-20); its diameter measures out at 0.634 inches. So I can just remove a modest amount of material, and it should fit into the hole. It may also appear that an advantage of this use of Plastruct tubing is that Plastruct makes matching end caps, including an elliptical style, that match the tubing diameters. More on that in a moment.
How tall should this dome be? The regulations specified a minimum volume for expansion domes at 2 percent of the tank volume, 8000 gallons, so the dome should hold at least 160 gallons. Given the dome diameter, set here by the Sunshine body casting, which is 54.8 scale inches, we can use the formula for a cylinder, with length taken as the height of the dome above the body (shown as dimension H in an explanation of this calculation, available at: http://modelingthesp.blogspot.com/2012/10/naperville-tank-car-handout-part-2.html ). Why the height? Because the dome volume was figured in excess of the shell-full volume, that is, filled up to the top of the horizontal shell. We of course will use the cylinder formula to find the height H in this case. The result, which is the minimum dome height, is 15.6 scale inches.
I cut a piece of the Plastruct tubing, and sanded it down slightly until it fit the hole. Here is a photo of the piece of tubing inserted into the Sunshine model’s tank hole, with the dome casting I received next to it. You can see the diameter discrepancy.

This tubing piece is about 18 scale inches high at the tank top, thus exceeding the required minimum height.
The dome top is the next step. The Plastruct part that matches tubing TB-20 is VHE-20. The rise of the ellipse on this cap is quite a bit too large, but the part is made of a pretty soft acrylic plastic and as such, is easy to modify to the shape you want. Nevertheless, modifying the Plastruct cap to a lower profile by filing and sanding turns out to be a long process. I got partway and began to wonder if this was the right approach, because the top would remain so rounded. Here is a look at the candidate dome at this point.

It is headed in the right direction, and I think it could eventually work. But I decided to keep it for the moment as a backup, and to go ahead and try a simpler approach first.
For this approach, I first cut and sanded another piece of tubing. Then I simply used a piece of sheet styrene (which happened to be greenish), glued it to the piece of tubing as you saw above, and sanded it to the outer diameter of the tube. This piece was then sanded to curve it toward the dome edges. This is easier and quicker than filing down the Plastruct cap. Here are the two caps, with a grab iron already added on the left. These are to be added on both sides.

Now the excessive “rise” of the Plastruct cap is avoided, but at the expense of having almost no rise at all. The prototype dome tops are convex over their whole diameter, whereas I can only really taper the edges of a flat plate.
Although either of these domes would probably pass muster on a black car, as this one is, I still did not entirely like what I was accomplishing. I went back to an earlier idea, to see if any of my inadequate kit domes might be close enough to use. From that perspective, I could make the smaller Tichy dome, from the original Tichy USRA tank car kit, do the job. It is a little too small in diameter for the Sunshine body opening, but it appeared that a shim of something like 0.010-inch styrene could fill the gap. The dome could then be set into the tank body and have a scale 16-inch height, just the right size. This looked like the best bet to me. 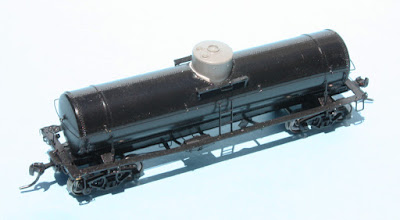 You can see part of the white styrene shim at the base of the dome. The top of this dome has bases for both the safety valves and the manway, both of which are included in the Tichy tank car detail set, and which can readily be added.
Now that I have a solid approach to this dome replacement, I can proceed with the detailing of the dome, painting, and then lettering the car. I will show those steps in a future post.
Tony Thompson
Posted by Tony Thompson at 10:22 AM