In previous posts to this blog, I have described how I represent tank car unloading on my layout. In particular, I have several locations where tank cars would be bottom-unloaded, that is, unloaded by gravity, through a bottom outlet connected to a hose. I showed some details of the modeling (for example, at: http://modelingthesp.blogspot.com/2015/09/modeling-really-minimal-oil-dealership.html ), though most of the previous cases that included hose unloading were at places where I had made duckboards as walkways for workmen (my duckboard modeling method was shown in this post: http://modelingthesp.blogspot.com/2015/08/duckboards.html ).
But I have some locations on the layout where I don’t think duckboards are as likely an arrangement. One of them is at my cannery in the seacoast town of Santa Rosalia, which receives vegetable and other edible oils by tank car, to use in fish canning. It has a loading dock for boxcar shipments in and out, but doesn’t have (yet) any indication of how tank cars would be unloaded. Shown below is a high-angle view of the industry as it now is, with the loading dock at right. 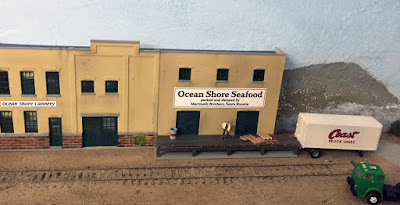 One plan would be to add a short concrete pad just to the left of the loading dock, and a coil of hose, along with a pipe connection of some kind.
But the two doorways to the left of the loading dock certainly call out for a sidewalk of some kind, since employees using those doors would likely prefer not to work on or regularly pass across the dirt outside. Accordingly, it seemed a better plan to make a wider concrete walkway, extending along the side of the cannery building, to include both doorways and to connect to the foundation of the loading dock, represented as concrete also. To make a sidewalk, I used a piece of Evergreen styrene sidewalk, part no. 4518, with half-inch squares.
The styrene piece is simply painted a concrete color (using paint modified years ago from Floquil Concrete, which I thought too dark and too gray). Note the small green metal door to the right of the double door. That might well enclose the pipe connection. 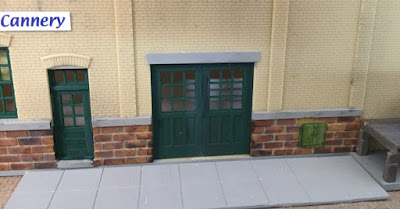 In this photo, you can see the difference from the rather bare appearance in the top photo.
Prototype photos of tank car unloading hoses tend to show pretty short hoses. To illustrate, shown below is an SP photo of tank cars unloading locomotive fuel at San Luis Obispo, and it’s evident that these hoses are not particularly long. I do usually tend to model them longer, but probably unnecessarily so. 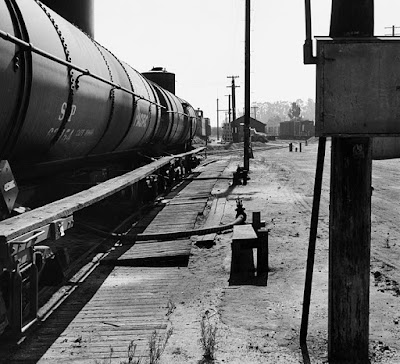 This photo also illustrates duckboards (see comments in the first paragraph of the present post), though I am not modeling those in this case.
The next step is to make a hose to be stored on the concrete pad. I usually use no. 22 wire for this, with a black insulation, because black hoses are so common. If the last 1/8-inch or less of each end is stripped and painted a bronze or brass color, it will definitely look like a hose connection, especially in a location like my cannery, which is back a ways from the layout edge. For a more foreground type of location, I can slip a piece of brass tubing over the wire end. Here are a couple of wire “hoses” with ends painted with Floquil Gold, but any gold- or brass-color paint would do the same.

There is also a good Tamiya color, Dark Copper (color no. XF-28), that I use for some fittings like these.
I chose the coiled-looking one in the photo above to add to the Cannery unloading spot. Having it there definitely reinforces the idea that tank cars can be destined here for unloading. You can click on the image to enlarge it if you wish. 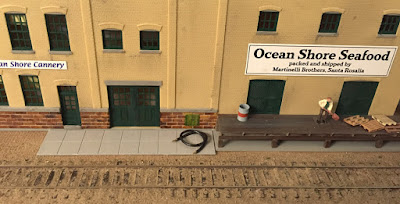 I like there to be some logic to the appearance of industries, especially with respect to how freight cars would be loaded or unloaded at each one. This is a theme that can be noticed in a number of my posts about model industries, and this particular one is just another in the series.
Tony Thompson
Posted by Tony Thompson at 2:47 PM