In much of the Far West in the transition era, sugar beets were an important and lucrative crop. This was certainly true in the area I model, the Southern Pacific Coast Route, along which sugar beets moved in both directions, due to sugar factories in both northern and southern parts of California. So although the particular mythical branch line I model does not lie in beet-growing country, it certainly does see mainline traffic in beets. (I touched on some of these traffic aspects in one of my posts that presented parts of an interview with Malcolm “Mac” Gaddis. That post is here: http://modelingthesp.blogspot.com/2011/01/modeling-freight-traffic-coast-line_19.html ).
In accord with the idea to include sugar beet loads in my mainline trains, I devoted some thought and effort to making my own removable beet loads, using fenugreek seeds. My results were not quite as successful as I’d like, but they wee all described in an earlier post (if you like, you can find it at this link: http://modelingthesp.blogspot.com/2014/08/modeling-sugar-beet-loads.html ).
Recently I came into possession of some of the old Chooch molded-resin loads which represent sugar beets. They show a reasonable size of the model beets, though they are not quite as irregular as real sugar beets, and overall have a good look. They came two to a package, and as noted on the label, part 7241 is for Red Caboose HO gondolas. 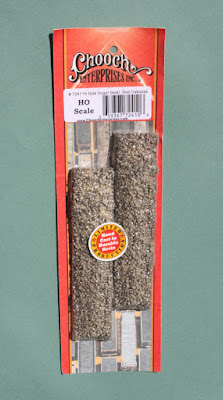 These loads are indeed sized for the Red Caboose cars, but in a way which is not realistic. Namely, they are made to sit on top of the car, representing a car loaded so high that beets lie on the top chords. Beets in such a location would, of course, soon vibrate off the car. Here is a look at the stock load, and you can see the ledge or offset that sits on top of the car side. (You can click on the image to enlarge it.) 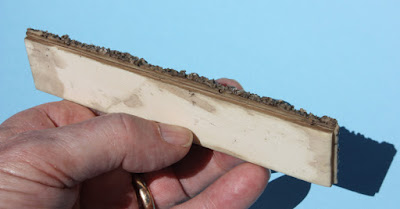 When you put this load into a Red Caboose gondola, sure enough, the load looks significantly too high. 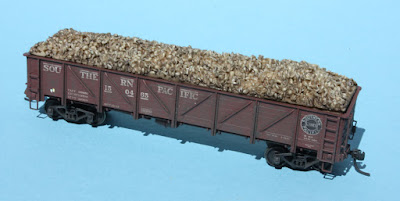 The image below shows the look we are striving for: fully loaded but not onto the car sides. This is a Southern Pacific photo, taken in 1948 near Salinas, California (John R. Signor collection). The loads of beets await unloading at the Spreckels Sugar plant in the background. Though some of the cars are the obsolescent beet racks, many are the new composite GS gondolas (like the model car shown above). The loads stand above the car side, but are nevertheless are entirely inside the car sides. 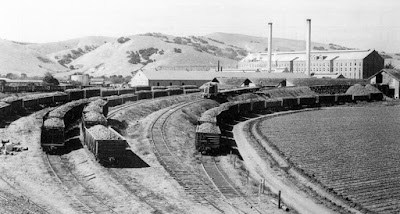 It seemed to me that I needed to remove the protruding edges of the Chooch load and allow the load to sit down inside the gondola. I used a heavy rasp to remove the excess resin at the edges of the casting. This gave a better fit (as I show below) but did expose white resin along the sides. Since I want these sides inside the car, however, they may not even need to be touched up.

But when the trimmed load is set into the car, it sits down too far. Some cars may have been partially loaded like this, but usually they were quite full, as you see in the Spreckels photo above. The photo below illustrates the problem, though at least it is realistic to have the load entirely inside the car.

So I used a couple of shott lengths of scale 10 x 10-inch lumber to glue spacers onto the bottom of the load. The height of these spacers could have been a little higher or lower, but this size does give a reasonable look.

With the spacers shown above, I was pleased with how the car looks when the load is put into the car. This corresponds, to my eye, with most prototype photos from the days of the beet gondolas without side extensions, such as the photo at Spreckels, above.

With these adjustments, I will go ahead and produce a set of beet loads for my layout. As I mentioned, these only pass by on the SP main line, but they are a characteristic part of Coast Route traffic, and I want to include them.
Tony Thompson
Posted by Tony Thompson at 10:27 AM