It was interesting at the BAPM 2018 meeting last Saturday (June 16) to see a number of things exhibited that had to do with sugar beets. (My general post about the meeting is here: http://modelingthesp.blogspot.com/2018/06/bapm-2018.html .) These included some model displays that I will show presently, but among the striking things shown was a good prototype photo reminding us just what a sugar beet really looks like. This was shown by Dave Maffei, and having a human in the image for scale is quite helpful. The photo is a 1946 ACME press photo from the Dave Maffei collection.And yes, they really are beets, being members of the Beta genus, with the interesting species name of Beta vulgaris.
So how do we represent these irregular root vegetables? (Some may know that railroaders on the West Coast always called these, and the trains that carried them, “The Roots.”) Using natural products which are regular in shape, such as anise seeds, clearly cannot represent sugar beets. I have used fenugreek seeds (see my post at: http://modelingthesp.blogspot.com/2014/08/modeling-sugar-beet-loads.html ), and these are certainly irregular, but they don’t have the tapered look you see above, resembling turnips or, as one modeler once said, “carrots on steroids.” Dave Maffei has used pomegranate seeds, and these are a good color and somewhat variable in shape, though not really shaped correctly. I think they are also kind of big for HO scale. Shown below are a bunch of Dave’s beet loads, as displayed at BAPM 2018. (You can click to enlarge.)

For a closer-up look at these beets, here is a down-on view of one car from Dave Maffei’s fleet. The color here is good, and the beets correctly look dirty. These are not washed when harvested (that will be done at the sugar factory), so there should be a suggestion of field dirt on beet loads. But as I said, they are a little on the large side. 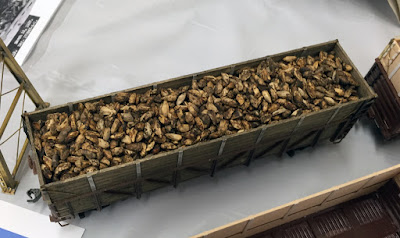 My own beet loads are the Chooch ones I showed in a prior post, after being cut down to fit inside Red Caboose SP gondolas of composite design (you can see that post at: http://modelingthesp.blogspot.com/2018/06/sugar-beet-loads-part-2.html ). I showed two such cars at the recent BAPM meeting (see link in the first paragraph of the present post), along with a beautiful model of a Blackburn beet rack built by Pat Bray. Here are those cars at the head of my display train, with the beet rack at left.

The “beets” in the Chooch loads do not have the tapered look of the prototype, but are about the right size and color.
A short comment on harvest seasons, if one wishes to only operate carloads of sugar beets in the correct part of the year. Northern areas like Idaho and Minnesota have a single harvest in mid-fall, say October 1 and thereabouts, but in California it was and is true that staggered harvests are the norm, and beets are harvested and shipped from late April to the end of September. On my layout, operating session dates are always the current date, except that the year is 1953, so any operating session falling within the California harvest range can accommodate carloads of beets moving on the main line of my layout.
I continue to be interested in sugar beets because of their familiarity in California railroading back in the transition era. My layout may not be set in a beet-growing area, but its Coast Route main line was definitely one of the principal routes for moving “the roots,” so I need to model them. This series of posts describes my efforts in that direction.
Tony Thompson
Posted by Tony Thompson at 7:39 AM