As I have described before, the annual meet of BAPM (Bay Area Prototype Modelers) takes place in June, this year on June 16. I always enjoy attending, and I would say that this local meet is typical of many, many RPM (Railroad Prototype Modelers) meets all over North America. There were the usual roughly 120 attendees, and lots of models displayed on the tables provided. There were four talks also, several tables for vendors, and in addition, a convenient snack and lunch service at one end of the display room.
Among all the displays, some of the models of most interest to me were the fine graffiti renditions of Scott Kelley-Clement. I photographed several of them and really enjoyed seeing them, but will just show one example here. As it should be, it was presented along with the prototype photo (as Scott did for nearly all the cars he exhibited). 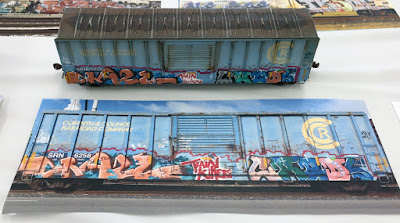 I also liked another outstanding example of modern modeling, taking advantage of the way(s) freight cars today may change ownership and be patched or otherwise modified to the new owner’s lettering. Here are two of Tim Keohane’s cars, both very nicely done, to my eye.

I definitely liked and enjoyed seeing the very attractive GE 44-tonner for Pacific Electric, built by Brian Zine and painted and lettered by Brian Williams, which is destined to Dave Stanley’s layout, the Morada Belt Railway. This is a diesel locomotive, of course, but has a trolley pole to actuate signals on PE trackage.

As another fine example of modeling, John Ruehle brought quite a nice complete train, a transition-era version of the Pacific Limited, train no. 22, as it would have appeared on the SP leg of its journey to Oakland. Here I will show just the one car shown below, UP 1541, a dormitory-lounge, and a very good-looking model. (You can click on the image to enlarge it.)

Lastly, in addition to the models I displayed as a full train was a single model I took to exhibit separately, my HO scale helium car model, in recognition of all the discussion in recent days about helium cars on the Steam Era Freight Cars internet list. (If you’d like to join, just Google that name.) The model is shown below, with the kind of informative tag I almost always display with models.

This model, some of its prototype background information, and the details and challenges of its construction were described in a series of prior posts, ending with this one: http://modelingthesp.blogspot.com/2012/11/helium-cars-part-3.html .
I always find it fun to attend RPM meets anywhere, but there is a special flavor when it’s a local meet with some of your (almost) neighbors exhibiting models, and also, of course, circulating in the room to view the models and enjoy some fellowship with old friends. This BAPM edition was no exception.
Tony Thompson
Posted by Tony Thompson at 9:35 AM