In the previous post, I discussed the Roco (AHM) 53-foot flat car, modeled as a 100-ton car owned by the United States Army and often sold with military vehicles glued to the deck. This is a model I wanted to upgrade so I could model military loads myself, using some of the fine vehicles available in HO scale. My post is at this link: https://modelingthesp.blogspot.com/2018/12/upgrading-roco-army-flat-car.html .
In addition to the corrections to the car’s deck and sill steps, I needed to add better trucks. The trucks supplied with the model are indeed the right type, 6-wheel Buckeye trucks, but are somewhat undersize and have terrible wheelsets. Awhile back, I had bought a pair of metal Buckeye trucks at a swap meet, though they were not identified as to model manufacturer. I also have an ancient pair of Athearn Buckeye trucks from the early 1950s, which are similar but not identical to the ones I bought recently. Both sets of trucks are sprung and have a pivoting mechanism that allows the the truck to flex in the center as did the prototype. 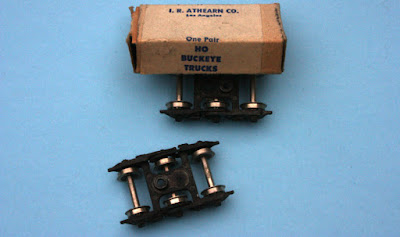 In the photo above, you can see the truck bolster of the newer trucks (foreground), which does not match the Athearn bolster (note my very original Athearn box at photo top), though the sideframes are identical. Here is a side view of a new truck. The wheel faces have not yet been painted a grimy black color.

The Roco trucks had been held in place with press-fit pins. This was not an option for the new trucks,  and the openings for the pins were quite large, too much so for any reasonable screw size. The solution was that the press-fit pins were glued into the bolster openings, cut off flush with the bolster face, and drilled and tapped for 2-56 screws, using a bottoming tap.
The rather oversize holder for a brake staff needed to be filled before anything could be done to replace the hand brake. I had some styrene rod on hand, 1/16-inch diameter (Evergreen 222), so drilled out the original hole to No. 52 and inserted a short piece of this white rod, using styrene cement. Visible below are both this brake fix, at the right edge of the car, and the tapped bolster hole.

At this point, I could attach the new Buckeye trucks. They fit well and have as much swivel as did the original Roco trucks, so will perform as well as the originals. As you can see in the photo below, the new sill steps have not yet been painted.

I also added a brake wheel in the appropriate place, but as shown above, it is depicted in the lowered position, as would likely be the position of a drop-shaft brake wheel for many of the loads carried.
The Roco lettering on these models is not very well done, and is thus a candidate for replacement. It is true that the lettering on my car, visible above, is in general agreement with prototype photos, but only for cars of a later era. Since these cars were built in the spring of 1953, my modeling year, they should be pretty clean and have the original lettering, including the Transportation Corps emblem.
There do exist nice decals for the lettering applied to the prototype cars when new, from Mt. Vernon Shops (see their listing of decal sets at: https://www.mountvernonshops.com/collections/all ; you can click on “USAX” to see the decal sheet itself). I will continue with relettering this model, and refinishing the deck, in a future post.
Tony Thompson
Posted by Tony Thompson at 11:30 AM