In my first post on this topic, I mentioned the ubiquity of stored ties and rail along rights of way, and showed the Southern Pacific Common Standard drawings for both standard tie piles and for rail racks. The latter usefully showed where the “standard” location was, at sidings. (That post can be found here: https://modelingthesp.blogspot.com/2018/11/tie-piles-and-rail-racks.html ). In the present post, I take up modeling of these features.
The ties are pretty easy. You just have to have a source of prototype ties, and then assemble them into appropriate piles. Modelers often don’t recognize the actual dimensions of prototype ties, because the tie strip we use represents ties buried in ballast and is rather less than full depth. I have long owned a huge supply of correct-size ties, produced by Model Hobbies decades ago. The box end is below. Quantity isn’t given but I would guess there were 500 to 1000 ties originally, all stained “creosote black.”

The dimensions given, 3/32 x 1/8 x 1-1/8 inches, corresponds to about 8 x 10 inches cross-section in HO scale (a standard tie is 7 x 9 inches), and about 8 feet, 2 inches long (most ties are 8 feet, 6 inches long, but length does vary). So they are a little oversize in section and slightly short in length, but do give a pretty good representation of a real tie. Incidentally, a prototype tie weighs around 200 pounds, so don’t show a single workman handling one.
I simply used canopy glue to assemble some tie stacks, following the CS 1901 drawing shown in the previous post. The CS drawing shows the alternate crosswise stacking only for untreated ties, but I have definitely seen that stacking style used for creosoted ties on the SP, so obviously not every stack was entirely “standard.” I just made three stacks (for now) to try different arrangements.

I installed one of the tie piles (the left-hand one in the photo above) alongside a section tool house on my layout at the edge of the town of Ballard. Shown below is the installation, with a seated figure added for interest.

For a rail rack, I decided to make some HO scale four-foot lengths of 8 x 8-inch rail supports from styrene. I also chose to make the “platform” for the rail rack from a piece of sheet styrene, which I could then ballast over, a simple means of making a flat area. I somewhat shaped the styrene platform to conform to the rail area I wanted to use, making it 41 scale feet long, as on the drawing. The rail supports were then glued to the styrene, 23 feet apart, and the entire thing given a primer coat of light gray. The primer served two purposes: first, to ensure that any gap in ballast cover was not snow white, and second, that “wet water” used in ballast application would wet the flat paint surface, unlike how it behaves on bare styrene.
Shown below is the primed platform, with its rail supports 23 feet apart, shaped to fit a broadly curved area of track.

The rail supports still need to be painted dark gray, to look like creosoted but used timbers.
I chose to use Code 83 rail for the first rail rack, since it is alongside the Coast Route main line, and that rail locally is Code 100. I have seen rail on rail racks that is plain rail, and also rail with bolt holes at one or both ends for fish plates (joint bars), so I think either is okay. I decided to drill a few holes (No. 75), then paint the rail dark brown, to look like old rust. The rails were then set onto the supports. Remember that a 39-foot length of rail, say 90-pound rail, weighs something like 1170 pounds, and need not be tied down in storage. Here is a plan view of the site, conforming to the SP dimensions. 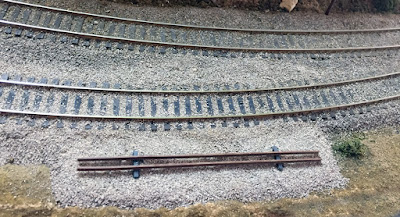 From more of a side view, you can see how the rails look. 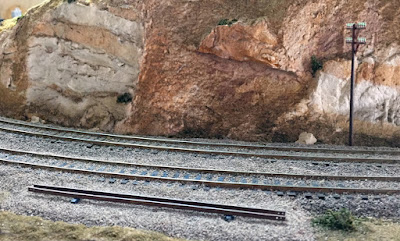 I am pleased with the addition of these tie piles and (so far) one rail rack. I plan to add more of them as lineside scenery.
Tony Thompson
Posted by Tony Thompson at 11:34 AM