In an earlier post, I wrote about some of my thoughts stimulated by visiting layouts, either to operate or just for viewing. As an example of something learned, or more precisely, finding something I should add to my own layout, I mentioned the pull-outs for track cars (motor cars, hand cars, or whatever) that I saw on Paul Chandler’s fine layout (that post is here: https://modelingthesp.blogspot.com/2018/11/thoughts-on-visiting-layouts.html ). This post is about how to model those features.
The first thing I learned by looking up the Common Standard drawings for these track car items is that the Southern Pacific called them “turnouts” (thus the title for this post). The drawings can be found in Bruce Petty’s excellent five-volume series, Southern Pacific Lines Common Standard Plans (Steam Age Equipment Company, Dunsmuir), and the specific drawings for track-car turnouts are in Volume II, pages 64 and 65. The general drawing is CS 551, and it is shown below. You can click on the image to enlarge it if you like, but you might do better, if you need details, to consult Volume II itself. 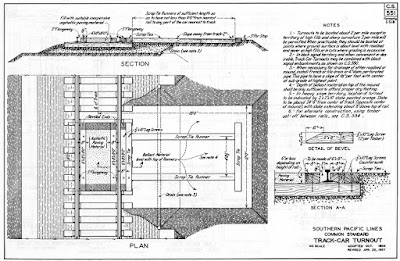 Notice that the “scrap tie runner” which accepts the flanged wheels of the track car are centered on the track gauge. That means that a set-off track car has its wheels running on top of the scrap ties, not operating as though the ties were rail-like supports at track gauge spacing for the wheel treads.
Two provisions of the drawing are of interest to modelers. First, Note 1 states that these turnouts should be placed about “two per mile,” making them quite numerous along any line of track. Second, Note 6 mentions an alternate construction, replacing the paved center area shown in CS 551 with an all-timber set-off, shown in detail in CS 554. That drawing is below. 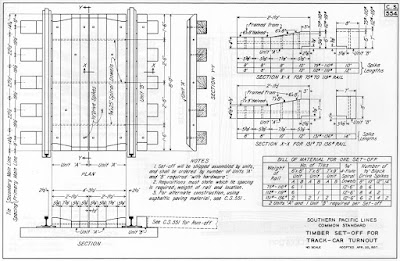 This drawing clearly shows a prefabricated assembly, and Note 1 of this drawing indicates that these set-off units will be shipped to the needed site. It will be noted in the cross-section at the bottom, and at right, that this is a somewhat complex assembly, with differently shaped timbers between the rails.
To return to the upper drawing, CS 551, all dimensions needed to build one of these turnouts are provided, except the length of the scrap-tie runners that extend perpendicular to the track. These scale out at about 12 feet of length. However, the upper sketch in the drawing indicates the length can be variable, as long as a track car spotted on the turnout is at least six feet clear of the nearest rail. I felt like the 12-foot length would work for me. Standard ties are about 8 feet long, so one and half ties will make up the needed length.
I will return to modeling of these turnouts in a future post. I have been reminded that Blair Line has a kit that makes three turnouts (see their photos of the kit at: http://www.blairline.com/setoff/ ), and although they show the turnouts as above ground and arranged to act as rails for the track cars, it would be easy to bury them flush, as the SP standard shows, and re-space the track timbers to have the track gauge center-to-center on the timbers, as the SP drawing specifies. Other details of the Blair Line kit would also have to be modified. On balance, I’m not sure modifying the kit is any less work than building the turnout from scratch. I can address that after I have scratchbuilt a couple of them.
Tony Thompson
Posted by Tony Thompson at 10:20 AM