Keeping up with details (PFE)

One thing I have always found interesting and stimulating about model railroading is that there is apparently no end to how much you can learn about prototype railroading, whether it be locomotives and rolling stock, or company history, or structures, or operating details, or whatever. And when new knowledge comes along, you have the always-intriguing question of whether and how to apply it. This post is about one such instance.
I particularly like finding out new information on subjects I already know fairly well. Why? Because even the smallest tidbit is readily fitted into the framework of what you already know. I remember, during the writing and research for the PFE book, how gratifying it was, to find some new item of information, because with the richness and extent of knowledge about PFE then in my head, I could immediately slot it into its proper place in the framework.
(For anyone not familiar, the “PFE book” is: Pacific Fruit Express, 2nd Edition, by Thompson, Church and Jones, published by Signature Press, Berkeley and Wilton, CA, 2000.)
The particular item that forms the background for the present post comes from the recent book, Southern Pacific Freight Car Painting and Lettering Guide, by Dick Harley and me (Southern Pacific Historical & Technical Society, Upland, CA, 2016), and the title is misleading in the sense that it does not convey the fact that 81 of its 191 pages are a Pacific Fruit Express painting and lettering guide, created by Dick Harley. I presented a broad-brush PFE lettering guide in the PFE book, but Dick has given us a much finer-grained document, based on the extensive surviving drawing archives at Union Pacific and the UP Museum.
In browsing the PFE part of the book, which I like to do, I noted something that was in force for a limited time. It related to placard boards. In the days of wood-sheathed cars, any placards or other notices were simply tacked to the wood car side. In 1936, PFE purchased its first reefers with all-steel bodies (Class R-40-10), but these were delivered with no placard boards. It was not until 1941, when all-steel Class R-40-14 was delivered, that PFE first put placard boards on the sides and ends of its reefers. The intriguing detail is that these were painted black, on both sides and ends.
The photo below, a detail of a shot taken of a string of new -14 cars leaving the Pacific Car & Foundry plant in Renton, Washington, clearly shows the contrast between the black placard board and the boxcar red end. (The complete image of this photo, by PC&F for PFE and from my collection, appears in both the PFE book and the SPH&S lettering guide.) 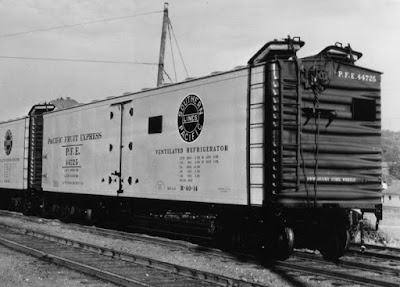 This is relevant because awhile back, I modified a couple of Athearn steel reefers to represent PFE classes R-40-14 and -20, both of which should have received the black end placard boards when new. My model of the -14 car (see my post at: https://modelingthesp.blogspot.com/2013/05/upgrading-old-models-athearn-reefers_9.html ) is presented as a repaint, but I chose to leave the -20 car in its original paint. Accordingly, it needs to have a black end placard board.
The black color for end placard boards remained in force from 1941 to June, 1946. That means that the rebuild classes PFE produced during World War II with steel ends would also have had these black end placard boards when first rebuilt. Those would be classes R-30-18 and -19, together with about the first half of Class R-30-21 (actually about the first 1500 of 2420 cars in the class). Again, any car repainted after 1946 would have lost the black end placard boards, but any still with their as-rebuilt paint schemes should have black end boards.
I decided to pull out all the PFE reefer models I own, that have pre-1946 paint schemes and, if they have steel ends, repaint the end placard boards in a faded black. As it happens, Tamiya’s “German Grey” (No. XF-63) is excellent for this color, and that’s what I used.
I will just show a couple of examples here. First, the all-steel Class R-40-20 car, which, since it dates from 1944, might well have still had its as-built paint in my modeling year of 1953; steel cars were repainted by PFE every 10 to 12 years, or sooner if repaired. 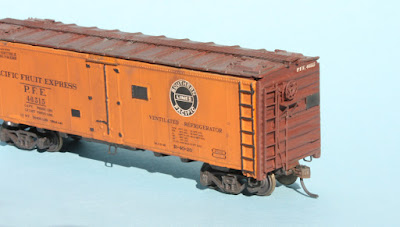 Note that the end placard board is not as clean as the side placard board. In the period I model, PFE frequently washed its cars, but normally only the car sides, so that is what I am trying to show here.
There were only 1000 of the Class R-40-20 cars, but around 5000 cars in the rebuild classes I mentioned above, so they are statistically important. With their wood side sheathing, however, they fell into the PFE standard repainting interval of only 4 to 8 years, so only a few of them would still have the original pre-1946 paint by 1953. I only have two such models, out of 10 cars in these classes. Here is one of them, an InterMountain model using Terry Wegmann parts, from Class R-30-19: 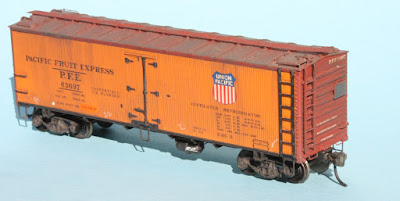 I would be the first to point out that this color change for end placard boards is merely a detail (and as I pointed out in this blog title). But I continue to feel that keeping up with these kinds of corrections is how the freight car fleet continues to improve.
Tony Thompson
Posted by Tony Thompson at 10:23 AM