Eighth anniversary of this blog

It seems impossible, but this post completes eight years of my writing this blog; the first post was on December 8, 2010. I have tried to get used to the longevity and size of what this has turned into, but still have difficulty grasping both the amount I’ve written, and the immense (to me, anyway) amount of page views I’ve gotten in these eight years — more on page views in a moment.
As of today, I've actually posted 990 individual pieces. Some of them have been short, a few have been long (though I resolved in the beginning to keep them readily readable in length). There has been a concerted effort on my part to vary the subjects and not get into ruts, and whenever I find myself going back to some topic repeatedly, I try to put it on the shelf for awhile. Of course my modeling may continue for some ways in that “rut,” but I will postpone describing more of that particular work until other subjects have been aired for awhile. I think I have gotten better at maintaining that variety, and also at recognizing the “size” of topics, and figuring out whether a single post can encompass the topic or not.
I have occasionally gotten an email, complaining that my subject is supposed to be “Modeling the SP,” but that most posts are not about anything specifically Southern Pacific. The complaint is correct, but perhaps misses my point. To model the SP, with an operating layout, means modeling a great deal in addition to the SP itself. On-line industries are  not directly SP; many freight cars that arrive or depart these industries will not be SP cars; scenery is not SP except in a regional sense; and many aspects of operation may not be visibly SP-specific either, though I do try to reproduce what I know of SP operating practice in my layout scheme. So maybe I need to reiterate my goals from time to time, so my title does not appear misleading.
But certainly an important part of my goals is capturing the spirit of Southern Pacific. The spirit of the SP, as for any railroad, may be an elusive concept, but fans of every railroad know it when they see it. I’m no exception. Shown below is an image that speaks that way to me, from a slide I bought on eBay awhile back. It shows AC 4164 as a rear helper, shoving on SP 103982, a box car of Class B-50-29. I don’t know the photographer or location. Date must be in the middle 1950s, as the box car still displays its “NEW” date of 9-51 (so the photo date cannot be later than 9-55). The car is fairly dirty, suggesting a date closer to 1955 than 1951. But whatever the specifics, it’s a great image to me. 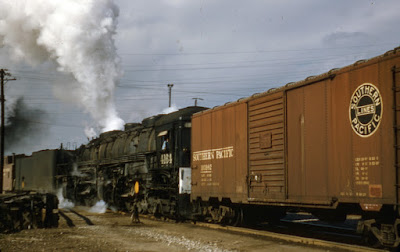 As always, I hope that each post contains something of more than routine interest. Obviously describing the assembly of a kit, while carefully following the exact kit directions, would not be of any real interest or value, and the same goes for any project that is simple and straightforward. I try to pick up any things I do that go beyond kit directions or the ordinary, everyday approach, as a way of showing some of the methods and techniques that go beyond the routine.
In the same way, I try to recognize when I have found or used some prototype information that is not obvious, or may not be understood. I enjoy prototype research and can happily spend hours in a library or archive when I get the chance. That can mean that I find information beyond the ordinary, and I like to pass that along in the blog, when it fits with a modeling aspect. Sometimes, of course, digging into archived resources can be daunting . . . 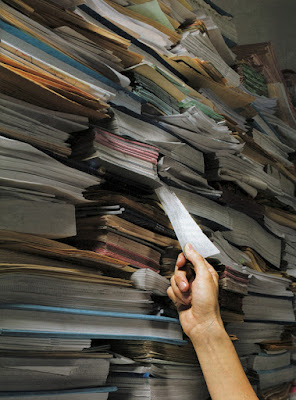 . . . but usually it’s not this bad. (And if you think I exaggerate, I should tell you some archive stories.)
A year ago, the page views of this blog had just passed 1,080,000 in total, meaning that the previous year had seen about 200,000 page views. That seems to be a consistent number in the more recent years. This past year, there were again more than 200,000 page views, bringing the all-time total to more than 1,295,000 views to date. This is certainly gratifying, and even though I did not set out to write this blog for some expected amount of viewing, I do feel pleased that it enjoys the attention that it does.
Another thing I have noticed in recent years continues to be a considerable part of the total page views. This is the number of readers coming to any particular post from search engines. This means, in part, that the blog is functioning as an archival resource, which I had not really thought about. In fact, in some cases, it functions much like a FAQ (Frequently Asked Questions), since people get referred to certain posts by others who already know of them. I am pleased that the blog can serve this purpose, along with its regular presentation of “what’s new” in my pursuit of Southern Pacific modeling.
Tony Thompson
Posted by Tony Thompson at 11:12 AM