I have spent some time in recent years, pondering the best way, as part of an operating session on my layout, to inform my yard crew at Shumala about extra trains that they may encounter. They have a timetable for the main line (the Southern Pacific’s Coast Division) but no direct information about extra train movements.
I have already tried a couple of options (more on that in a moment), but the new issue of Model Railroader magazine that just arrived at the end of December (the February 2019 issue . . . talk about a time warp!) contains a thought-provoking column by MR columnist Jerry Dziedzic. Jerry’s column is always interesting, and one of the first things I read in every MR, but this one struck a chord for me. It’s about line-ups.
A line-up, for those not familiar with the idea, is a list of train activity, provided by the dispatcher, for use of anyone needing the information. One example might be hostlers at an engine terminal, who need to know when power is needed. As Jerry points out, another obvious example is track crews, who may be working some distance from any place where an operator could convey information to them, and they need some (dependable) source of information. A good summary of line-up usage is in Steve King’s section of the OpSIG book, 19 East, Copy 3 (by David Sprau and Steve King, Operations Special Interest Group, 2013), page 120.
A line-up covers a specific stretch of railroad, and has a time of validity, such as 1 PM to 5 PM, chosen by the dispatcher, and of course appropriate to the needs of track crews or anyone else needing it. Obviously a dispatcher is quite careful in making up such a line-up, as it functions in effect as a timetable supplement, and it may underlie life or death decisions by employees out on the road.
To illustrate a line-up, based upon my own layout’s Coast Division timetable from September 1953, a line-up might look like the following. I have used the Bell Gothic typeface here, which is quite similar to the face on billing typewriters used by SP agents. An agent would type this out for crews, after receiving the information from the dispatcher.

The information here is that two of the scheduled trains are running late, a normal occurrence for scheduled freights on the SP in this era, and of course the extra becomes visible. Since most trains take about 15 minutes from Guadalupe to Shumala, the yard crew knows when to expect Extra 2402. Note that the timetable is not superseded by this line-up, because the train times are only shown in relation to their timetable time. I like this because it is compact and is based on prototype practice.
As I mentioned, I have already tried a couple of ways of supplying the same information. One option is to issue a copy to yard crews, of the order that authorizes an extra. I got this idea from Dave Sprau’s article in the same OpSIG book mentioned above, 19 East, Copy 3. He pointed out, page 31, that some ways of writing a Form G train order, authorizing an extra train, may need to be addressed to yard engines or yardmaster, and I picked up on that.
I show below an example of such an order. As usual on my layout, the month and day of the order are those of the session, but in 1953. This is an order specifying leaving times, a standard variant of a Form G order (for far more on this topic, see the OpSIG book cited above). A separate order was evidently issued to the conductor and engineer of extra 2402; or they could have been listed as also receiving this order. 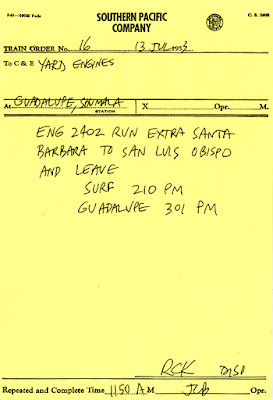 This order form is taken from an SP prototype train order form. At this time, SP did not label a “standard order” as a 19 order, since that was their usual form. They did use a form labeled as a 31 order for occasions when that was required.
Another idea is for the agent to hand a note to the yard crew, and this has the advantage that it can be done whenever the option of an extra train comes up. Agents did in fact prepare written messages to deliver to train crews for all sorts of reasons (especially when a verbal statement might not be reliable enough). However, I did not entirely like this method, as the written message to crews was most commonly done on the prototype when the agent was not available for verbal instructions. Accordingly, this seemed less desirable to me if used for a more routine matter during the day when an agent would be on duty.
I am always trying to make my operating sessions as prototypical as possible, while making sure that paperwork is clear and simple. I think using a line-up will help with that approach.
Tony Thompson
Posted by Tony Thompson at 10:23 AM