I was recently thinking about adding another Maintenance of Way (MOW) tank car for Southern Pacific. Certainly in the steam era, these seemed always to be on the MOW rosters. I already operate two of the old Westside brass cars, models of SP Class CS-25A, and these often can be seen on the “outfit track,” as SP called tracks for MOW use, in my layout town of Ballard. Here’s SPMW 7424: 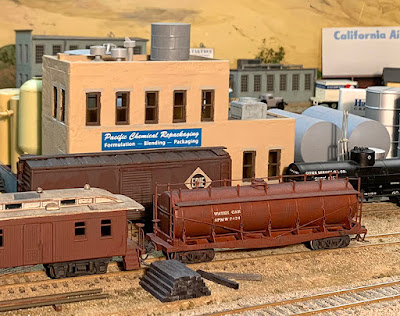 But even older cars are often seen in transition-era photos. In looking through some old drawings, I happened onto the drawing shown below (SP drawing; original, ink on linen, 8 x 16 inches), dated August 1892. This drawing was also reproduced in my Volume 5 on tank cars, in the series Southern Pacific Freight Cars (Signature Press, 2008). You can click on the image to enlarge it if you wish.

The car is named as a “distributing car,” doubtless meaning distribution to company facilities. Its three compartments are a large center space, 4000 gallons in size, for “coal oil” (kerosene), a left-end compartment of only 800 gallons, for “signal oil” (a slow-burning petroleum product used in lanterns and signals), and at the right, a 1200-gallon compartment for “mineral seal,” a petroleum product mostly used as a solvent and for cleaning. Total capacity, 6000 gallons.

Whether this car was built or not is not certain, but from the 1890s into the mid-1920s, there were two three-compartment cars carried on the SP revenue roster, SP 56198 and 56199, the latter being a 6000-gallon car like the drawing above. It is certainly possible, then, that SP 56199 was the same as the drawing, though no photographs have ever surfaced as proof.

But there may have been a successor. In 1928, Los Angeles General Shops assembled a “new” distributing car using “surplus materials,” as its car card (at CSRM) stated. Paul Darrell photographed SPMW 3721 (Sheldon King collection). This is actually a CS-35A flat car with the tank mounted on it. Whether any of the parts of the old SP 56199 were used is not clear, but probably not. The tank sections are all double-row-riveted, something certainly not practiced in 1892, and the same goes for the safety valves, not included in the 1892 drawing. But since this car was dismantled in 1950, it’s not an option for my 1953 modeling era. 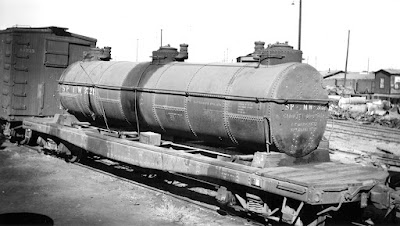 What else could be done? Some quite old tank cars did survive in SP company service. How might one go about modeling such a car? There is one simple possibility, the old LaBelle “Texas Midland” tank car kit. As intended to be built, it reproduces an early 20th century tank car. For an example of what these looked like, late in their lives, here is another Paul Darrell photo (Sheldon King collection). This car, SPMW 7698, has five courses of tank sheets, as did most SP Class CS-12 and -12A tank cars.

The LaBelle car is set up to be built with seven courses of tank sheets. Below is a photo of a partly completed LaBelle kit that I purchased at a swap meet awhile ago. Obviously the builder was working toward a MOW car, probably somewhat like the photo above. One could readily change the tank sheets if desired, but my own feeling is that they aren’t very obvious.

The most obvious need on this car is the side railings. I have an idea how to make a reasonably sturdy version of what you see above on SPMW 7698, and may proceed with the project. Photos of many SP MOW consists show that they included a water car, and this could be one. Progress on this will be reported in a future post.