In the preceding Part 1 on this topic, I described some of the history of this long-lived kit for a distinctive car, which is essentially a 70-ton ladle on a support structure with trucks. I also began description of building one of these kits, one that was missing a few of its minor parts. That post can be seen here: https://modelingthesp.blogspot.com/2021/10/the-famous-pollock-hot-metal-car.html . In the present post, I complete the car.

But first, I was (perhaps) justly criticized in an email for not saying anything about the prototype and its maker. Fair point. The William B. Pollock Company of Youngstown, Ohio produced a wide variety of ladles, slag cars, and hot-metal cars for the metal-producing industries for many years. Founded in 1863, they made their last shipment in 1983, as documented in the photo below (from this interesting site: http://www.therustjungle.com/rustjungle/2016/11/1/william-b-pollock-co ). 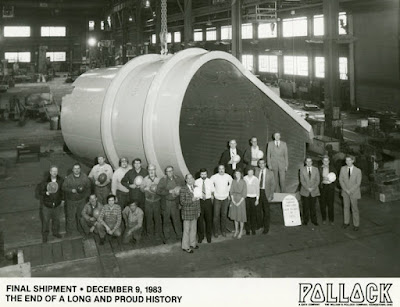 Note here in particular the company name at lower right, with the triangular letters “O.” This is represented on the model car in just this way.

Assembly of the Pollock ladle itself that forms the “load” for this car was described in the previous post. Now my attention turned to the car itself. My first challenge was that only one of the formed brass covers for the coupler boxes was in the kit. No real problem, I simply made a white styrene copy of the brass one. The two covers are shown temporarily installed below. 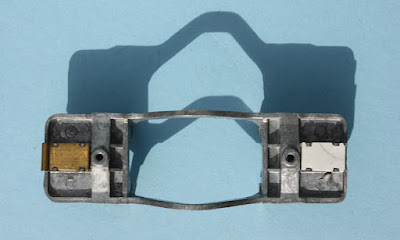 The next step was to attach the brake gear castings. These sit on top of the car deck, and the brake gear components themselves are inside an enclosure, no doubt to protect them against spills of molten metal.

The kit directions instruct you to drill through one of these, to insert a one-piece brake wheel shaft. I just made a separate shaft on each side. My kit happened not to have the brake wheels any longer, so I substituted Kadee no. 440 brake wheels. Here is the upper side of the car at this point. 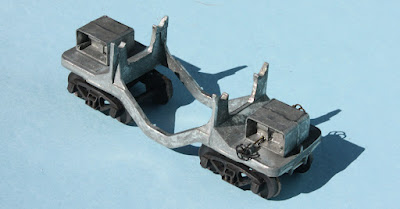 For truck attachment, as seen above, I simply tapped the holes in the kit casting for 2-56.

Next came paint. The prototype, we are told, was usually gray, with or without highlighted black on the letters, “POLLOCK.” I decided to use gray also, and chose Tamiya TS-32, “Haze Grey.” I haven’t decided whether to highlight the lettering.

One might perhaps ask at this point, what would I do with this model on my layout? After all, the layout has no steel mill, Pollock’s major customer type. Nevertheless, I have a large industry, Jupiter Pump & Compressor, which includes a sizeable foundry, and a Pollock car like this might be used there. And of course the car could be glimpsed in a passing mainline train, on its way to be delivered somewhere else.

For either kind of load destination, the car would be likely to be delivered as a load on a flat car, rather than moving on its own wheels. I have already shown a method to model that kind of flat-car delivery (you can see that post at: https://modelingthesp.blogspot.com/2021/06/railroad-equipment-on-flat-cars.html ). Here’s the Pollock car, loaded on a 70-ton flat car.

It was fun to research and assemble this classic HO-scale model. I will certainly work it into an operating session occasionally. Now to make up some waybills . . .