Chromite mining on my layout

A few years back, I wrote a description of the kinds of published information that a modeler can use to find out about mining activities in a particular area being modeled. Of course, if you are modeling West Virginia or the Mesabi Range, you are not in doubt about mining issues, but there were more modest mining areas throughout the country. That post can be found here: https://modelingthesp.blogspot.com/2016/10/modeling-mining-in-your-locale.html .

I followed up that post, which ended up describing a little about chromite mining in California, with more information about the mineral itself, and some progress I had made in making ore cars and suitable loads. (See that post at this link: https://modelingthesp.blogspot.com/2016/10/modeling-mining-part-2.html ). In the present post, I return to this topic.

I have chosen the name of an actual mining operation in the vicinity of my layout locale, Monarch Mining, as the shipper of ore, ordinarily the kind of “disseminated” ore described in the post cited in the first paragraph, above. This ore contains a moderate amount of the target mineral, chromite, in a matrix of serpentine.

I envision this ore being en route to a facility that refines the ore to separate the chromite, and then makes high-temperature refractory brick, one type of which includes chromite in the brick composition.

And just to repeat what I’ve said before, the term “ore” is an economic one: it means a mineral that can be economically mined and refined for use. The identical mineral that is more difficult to mine, transport, or refine would no longer be considered an ore.

To transport chromite ore on my layout, I have continued to work on 70-ton ore cars, as I showed in the post just cited, and have increased the size of the fleet. But where would ore come from? Despite the fact that having “a mine” on a layout is a cliche dating back 80 years or  more in the hobby, I don’t have one and don’t want or need one. Instead, I could model a truck dump; or simply let the mining company load cars at a team track.

So even in the absence of a truck dump on the layout, loaded and empty Monarch ore cars can be seen, for example as in this photo at Shumala. These cars, MMCX 217 and 241,  are evidently waiting for pickup by the next SP local. 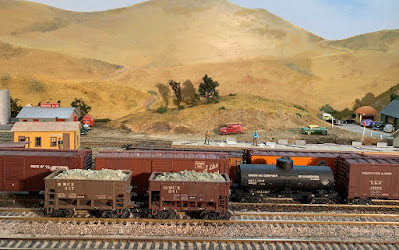 As I have mentioned in previous posts, I also used a Grandt Lines kit for a Gilpin Tram ore car, simply adding HO scale detail parts, trucks and couplers to the O-scale car body. This makes a more reasonable size ore car for my use. I have one of them labeled for Monarch Mining, as you see below in another cut of ore loads at Shumala, waiting for pickup. 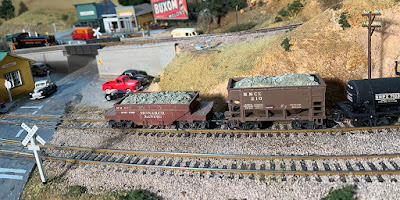 In addition to these carloads of ore, Monarch would presumably receive various kinds of repair parts and supplies for its mining operation. These can be directed to a team track for the time being, until I can figure out where to add an office or warehouse for Monarch on the layout. Or, of course, like many industrial users of rail shipment, there really need be no Monarch building visible anywhere on the layout, with any shipments going via team track.

Here’s an example waybill to represent such an inbound shipment. The Hardinge Company, headquartered in York, PA,  was and is a real concern that once manufactured many kinds of equipment including mining and milling equipment. Today they specialize in metal cutting equipment. They continue to have warehouses all over the world; in the transition era one was in Salt Lake City. 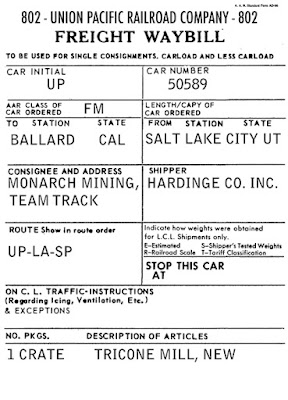 Here is a photo of the shipment just described, being spotted on the team track in Ballard on my layout. I have shown this load previously, in a post about removable loads, especially crates, for open-top freight cars  (see it at: https://modelingthesp.blogspot.com/2012/03/open-car-loads-crates-and-machinery.html ). 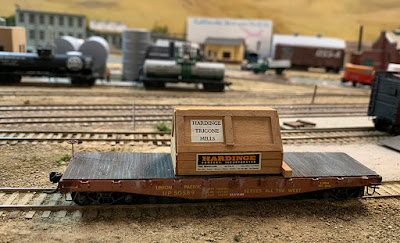 So as I have mentioned before in several places in this blog, I do represent mining on my layout, despite the fact that California in this or the previous century wouldn’t be considered a major mining state; and I neither intend nor want to model an actual mine on the layout. I just depict the traffic.

Posted by Tony Thompson at 4:32 AM