In the first post on this topic, I showed the appearance of the so-called “car ledgers” of the Southern Pacific (formally, Freight Car Records), with car fleet history from 1920 into the late 1950s. I described the contents in a broad manner, and listed the titles of the eleven volumes of surviving ledgers  — all have now been donated to CSRM (California State Railroad Museum). That post is here: https://modelingthesp.blogspot.com/2021/10/sp-car-ledgers-donated-to-csrm.html .

I should give a little background. As the merger of SP into Union Pacific approached in 1996, many items of historical or economic interest vanished from offices and shops around the system. These ranged from original oil paintings in the headquarters at 1 Market Street, San Francisco, to individual tools in many shop buildings, and of course historical materials of all kinds.

The set of car ledgers that is the topic of this post was no exception, and a single employee managed to take them all home. I will not identify that individual, but will just say that when the location of the ledgers was determined, Steve Peery and I approached that individual to persuade either a sale or a donation to CSRM.

No prizes for guessing which one. Steve and I split the considerable price (which will now become a tax deduction), after being told that the alternative was for individual volumes to be sold separately on eBay. Had that happened, likely several or most of them would never have been seen again. But let’s get back to the contents of these books.

In the previous post, I mentioned the headers of the pre-printed Form 4589 pages. One is shown below, which happens to be for Class A-50-6, the famous “door and a half” wood-sheathed automobile cars, once the subject of a popular Ambroid kit in HO scale, and more recently of an excellent Funaro & Camerlengo resin kit. You can click on the image to enlarge it if you wish.

Quite a few details of the construction are shown here, including such specialties as the Bettendorf truck sideframes, Camel door devices, and Simplex truck bolsters, along with many detailed dimensions. Below the header are the individual columns. Here the one of interest to modelers is the installation of geared hand brakes (column 7), meaning Ajax brake gear in most cases. Note also that some repetitive entries are made with rubber stamps.

For just one example of the extensive car records themselves, below is a single page of Class B-50-15 box car histories. These record when and where the car was steel-sheathed (if it was), where and when any changes of trucks were made, and when and where it was renumbered into a six-digit number (and that number is shown). Finally, dates and places of scrapping or sale outside of SP are also shown if that occurred during the life of this record volume. 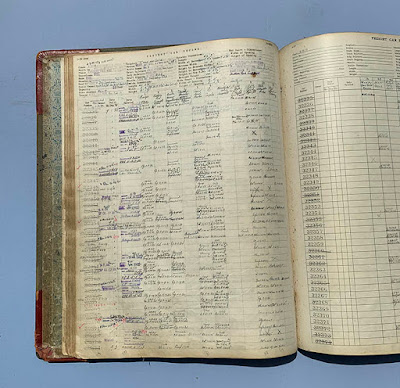 Note furthermore that the records for these cars were so extensive that the facing page includes additional columns of information about the same cars whose numbers are shown on the left page. In other words. these are double-page entries for an entire class of cars.

Finally, let me show a closer-up view of what these records look like. Here I return to the Class A-50-6 records mentioned above, to show complete lines of some of the entries. 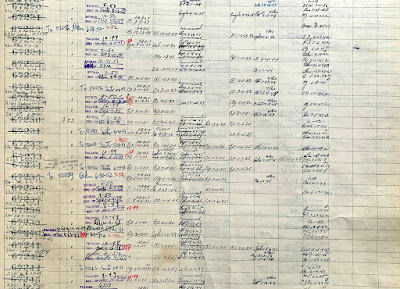 Among many interesting details, note the renumbering of some cars into 52000-series numbers, just to the right of previous car numbers. These denote conversion to wood-chip cars with roofs removed.

For a more close-up example, here are some of the entries for Class B-50-15 box cars. As with the automobile cars shown above, the car numbers crossed out denote removal from revenue service. 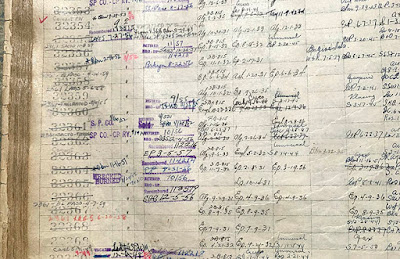 I suppose it is obvious, but records of this degree of detail permitted me, in writing the five-book series, Southern Pacific Freight Cars, to have detailed historical knowledge, not only of how each car class was built, but how it was changed during its lifetime, up to and including scrapping date. These ledgers were a critical resource.

It should be mentioned that three categories of cars, covered in two of these record books, are only briefly covered. They are maintenance of way cars, cabooses, and passenger cars. In each of those cases, SP maintained “car cards,” 5 x 7-inch index cards, one for each car, that are far more detailed than what is in these record books. Luckily, at least two of those sets of car cards survive. The authors of two SP car books, a caboose book and a maintenance of way book, used the car cards as the primary reference. Nevertheless, the Record volumes are complementary to those sets of car cards.

The ending date of use of these volumes is not known for sure. Although someone in the Mechanical Department did make a few entries later than 1957, in general, the use of these Record books was ceasing about that time, as SP records of many kinds were being transferred to computer data management and storage. Little if any of the information in later days has survived in the kind of form shown in these Record books. But at least these books are now at CSRM.