In this blog, I have described previously my projects to rebuild aging track switches for better electrical operation, and the use of Tam Valley Depot’s Frog Juicers to power them. [For more on their products, you can visit their site at: http://www.tamvalleydepot.com/support/whichfrogjuicer.html .]

The current topic is a somewhat different one, the three-way Peco switch in my layout town of Santa Rosalia. As I previously explained, this switch is designed to have its electrical needs taken care of with a Peco switch machine. Not wanting to have to bury one of these machines in the layout, I originally devised a way to electrically serve this switch, using a pair of toggle switches. I described that process, and the finished trackwork, in a blog post. (See it here: https://modelingthesp.blogspot.com/2017/01/electrical-wars-part-13-three-way.html ).

The final result was a small control panel, which I showed in the post just mentioned, and below is a repeat of the photo from that blog that showed the panel. 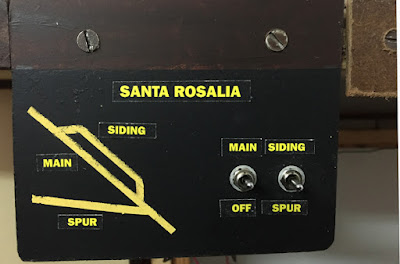 The problem with this was that the electrical controls, and the switch point rail settings, could be combined in a way to create a short. I think there are nine possible combinations of switch point choices on the track, and electrical choices in the panel shown, and only one creates a short. However, it has not been particularly uncommon in operating sessions for crews to find that one combination that makes a short.

So although I do give crews a short tutorial on how not to make a short with this panel (set both toggles to center-off, choose the track you want by throwing the points, then power that track electrically with the appropriate toggle), this instruction obviously fail sometimes; and even when it works, it’s a degree of operating fussiness I would rather avoid.

Shown below is the switch as installed. At top is the Santa Rosalia depot, with its freight platform at left. You can see the dark bits at rail joints, showing the dimensions of the switch itself.

It was my friend Jim Providenza who said one day, “Couldn’t you power this with Frog Juicers?” Not having thought of that, I replied that I had no idea, and Jim, challenged, said he would cogitate about it and send me a wiring diagram. He did, but I wasn’t convinced, so put the project to one side. But the realization that there might be a good solution to replace the panel shown above kept nagging at me.

Finally I decided to dive into the electrical rabbit hole (note again the title of this series of posts). It didn’t actually take long to realize that Frog Juicers (a) certainly could work, and (b) that Jim’s idea that it would only take two of them was right. I thought it might take three, because there are three frogs, but the key is in the original Peco drawing showing the three wiring leads they provide (the drawing is flipped so that this is the view from above).

Note that they themselves show frog leads 2 and 3 as combined.  And when you spend a little time tracing the connections, it turns out that this is correct. There are three possible routes, but each one is part of a division between two possibilities. The Frog Juicer powers route choices, in effect, so it should only take two of them. One of them powers the choice of routes 1 or 2, the second powers the choices between routes 2 and 3. Those frog leads are the wires at lower right in the drawing above.

So I cut the wires from the panel toggles (shown at the top of the present post) and connected them to a pair of Tam Valley Depot Frog Juicers. The Juicers aren’t yet mounted to a supporting panel, and in this view still just hang from their wiring connections, but they certainly operate, and all three routes through the three-way switch work fine. 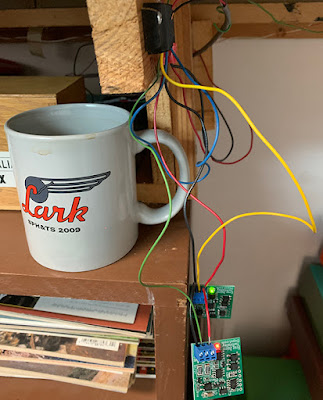 What a nice result! No more giving tutorials to operating crews, no more waiting to see if they find the one combination in nine that makes a short, and no more panel switches to look at and puzzle over. Thanks again, Jim, for the idea, and of course to Tam Valley Depot for the terrific product.