Among the minor details which add to the realistic appearance of freight cars are chalk marks and route cards (and sometimes placards). This topic was touched on in the clinic handout for the joint weathering clinic by Richard Hendrickson and me, and you can read it through this link: http://modelingthesp.blogspot.com/2011/10/weathering-clinic-handout.html
In this post I want to expand on the subject a bit. First, route cards. Many railroads, in at least some of their terminals, used small cards, roughly 4 to 6 inches square or nearly square, to help switchmen correctly route cars. These were tacked or stapled to what was called a route card board on a steel car, or simply to the sheathing on a wood-sheathed car. Prototype photos show that most cars carried these cards, though not all.
Here is a photo of a clerk attaching a route card to the placard board on the car door. This lowered location for door tack boards was adopted in 1954. Just visible at left, behind the clerk’s head, is the actual route card board. The photo was taken by a Cotton Belt company photographer at Pine Bluff, Arkansas. 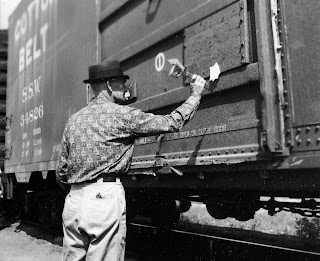 The clerk is using a “hammer stapler,” which can be swung like a hammer to deliver a staple on impact. The staple sticks out a little, so the route card can be impaled on the staple ends before stapling, as you see here. Note that some older cards remain on both boards.
These cards are easily added to any freight car with small squares or rectangles of paper. The most common color was manila, but color photos do show white, blue, yellow and pink cards in some cases.
Here are two model freight cars with route cards. The foreground Boston & Maine car also has visible paint patches for reweigh and repack data, as I’ve discussed elsewhere (for example, the corrected version of my article in Railroad Model Craftsman, available here: http://modelingthesp.blogspot.com/2011/03/reweigh-article-from-rmc.html ), and has chalk marks, which I will discuss in a moment. 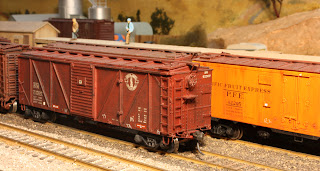 There is also a placard on the placard board of the box car, high on the car door, which is a decal from a Sunshine decal set for placards. This B&M car is from a Sunshine kit, while the PFE car is from InterMountain.
That same box car can be compared to the box car adjoining it, in this additional view. Here the SP box car has a route card board on the car door, while the B&M car has had a route card applied to its sheathing in a convenient place for the car clerk.

The SP car is a Challenger brass model.
These cards were of course applied to all types of cars, not just house cars. Here is an example for a gondola:

The location, near the lower left corner of the car side, was a common one for route card boards on open-top cars. The gondola is a recent Tangent model.
I have commented in earlier posts on chalk marks. Modelers sometimes call them “graffiti,” but nearly all of them were in fact no such thing. Most were notations applied by car clerks about the track to which the car should be switched, or its outgoing train number, or the industry and car spot to which it was destined, or any of a great number of other bits of information needed by switch crews. The codes varied from yard to yard and railroad to railroad (and likely era to era), and today would be nearly impossible to decode, so simply copying what you see in prototype photos is probably the best way to select these.
Here is a photo of a car clerk, armed with the usual one-inch diameter “railroad chalk,” noting something on a car side. This is a T&NO company photo, taken at the road’s large Englewood yard at Houston, Texas. 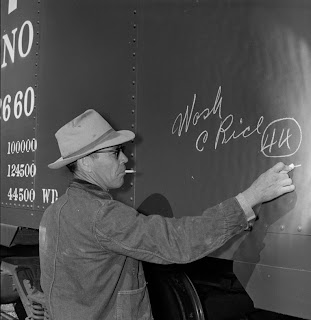 In model form, these can be added with Clover House dry transfers, or with any of several Sunshine decal sets (available in white, gray and yellow). They can also be readily added with a colored pencil, with as sharp a point as you can make, in white, gray, or yellow. Most of mine in these photos were done with a pencil. My own preference is for the Prismacolor brand of these pencils, available in any art supply store, as they seem to perform best for me.
Here is another freight car, with reweigh and repack data, as well as a route card, and with added chalk marks. They are a mixture of Clover House transfers and the white pencil technique. 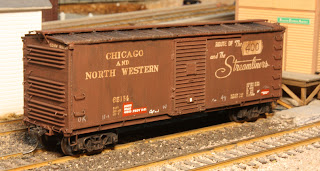 The model is from a Sunshine kit of a C&NW rebuild of that road’s USRA double-sheathed box cars.
The route cards and chalk marks are minor details but I believe they add greatly to the realistic appearance of model freight cars, following what one sees in prototype photos.
Tony Thompson
Posted by Tony Thompson at 10:59 AM