The question has arisen as to what route cards looked like. I don’t have any collection of them, but can provide two examples. The general size was mentioned in the prior post on this topic, at: http://modelingthesp.blogspot.com/2011/11/chalk-marks-and-route-cards.html .
Both these examples are from the book by E.W. Coughlin, entitled Freight Car Distribution and Car Handling and in the United States (AAR: 1956), an extremely helpful and informative book for those interested in car movements. For anyone who wants a copy, they have been readily available used on the Internet.
This Missouri Pacific form was printed in triplicate, the bottom copy of which was a  manila card to be attached to the route card board on the freight car. Its first two copies were for clerks’ use. 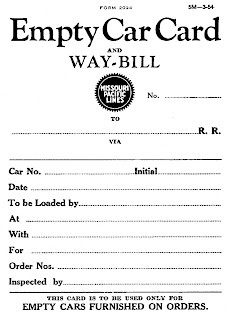 Like many kinds of Empty Car Bills, this can serve for moving foreign empties homeward, or directing cars to locations which needed empty cars.
Coughlin also discussed the use of “switching cards,” which could be applied in a terminal yard to direct cars to local industries, or could be applied to cars being picked up at those industries. The example I’m showing would be to direct a card to a switching “zone,” Zone 300, and to industry 313 in that zone. He doesn’t state the origin of the example, but note that it identifies Portland Terminal on the card. 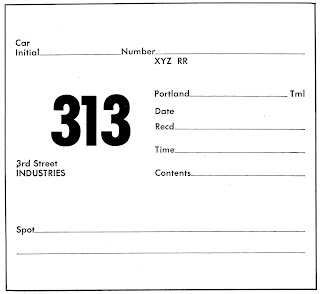 Again, this is stated as a manila card, but can be any color of card stock which the railroad may have felt achieved a useful color coding. I mentioned in the prior post that careful examination of color photos shows white, yellow, blue and pink examples along with the classic manila color, and light green examples are also known. These are still conventional colors today, for colored paper and card stock, so are readily available at any stationery store.
The ambitious modeler might use switching cards with even bigger numerals than the one shown above, and rely on operating crews to read them--but personally I doubt that’s practical in HO scale with indoor lighting. It might be a practical idea in S or O scales.
So in HO scale, which I model, since I consider any card as small as this to be unreadable, I simply use small blank pieces of colored paper, in the area of 6 scale inches square. Photos show that many route cards were rectangular, so most of mine are that shape.
Tony Thompson
Posted by Tony Thompson at 12:22 PM