Type and typography on the layout

This is potentially a very broad subject, and I only want to offer a few comments here. Most of this topic has to do with signs, both of industries and otherwise on the layout. With regard to things like automobile license plates, you might wish to read my earlier post on the subject, at:  http://modelingthesp.blogspot.com/2011/04/choosing-and-modeling-era.html , in which I commented on how license plates are one way to define your modeled era.
What is meant by “type and typography?” By type I mean type faces, nowadays often called fonts. The word “typography” simply refers to the arranging of type to communicate an entire message, whether it’s a billboard, a business name, or a directional sign. But to deal with this topic, there’s no need to worry about the principles of typographic design. It will probably suffice to keep your eyes open to look at signs, especially period signs visible in many photographs. The goal is to create signs which look realistic. (But if you do find the idea of understanding design to be interesting, I strongly recommend a basic book, The Non-Designer’s Design Book, by Robin Williams, from Peachpit Press. The book is still in print, and moreover is readily available used on the Internet.)
Here I suppose I should fully disclose my own interest. I do find typography interesting, and I practice it in designing and laying out books for Signature Press. I’ve even taken college classes in it. And I might qualify as a “type geek,” since I not only enjoy books on type design but tend to collect electronic fonts for a variety of uses. But there is certainly no need to go that far, when it comes to realistic layout signs. A few simple precautions should be all you need.
Convincing signage requires the same attention to prototype appearance as do other scenic details. The most common errors in model signs are typeface choices which are not realistic on signs (more on this in a moment), and use of anachronistic type faces. By far the most anachronistic are the familiar computer faces, such as Helvetica. These may be fine faces in their own right, but may not have been in use at the time modeled.
A pet peeve of the very few who can recognize type faces is the use of ones which are historically anachronistic. For example, the Helvetica font was introduced in 1957, and didn’t become widely used until about a decade later. (There’s an excellent film about this, actually entitled Helvetica. Netflix among other sources has it.) A movie about the Victorian era which showed buildings with signs in Helvetica would be anachronistic--and so would a 1940s layout with such signs. As I said, very few could name that font, but it won’t look right, perhaps at some subliminal level. Avoiding such conflicts is just one more way to maximize the look of realism on a layout. On the other hand, of course, if you model the 1980s, Helvetica signs are almost required.
A better choice for pre-1960 signage, using lettering of the same kind as Helvetica, would be something like Franklin Gothic. Introduced early in the 20th century, it has been widely used ever since, and avoids era specificity or anachronism. Examples can easily be added of both appropriate and inappropriate sign fonts, but if in doubt, feel free to Google the name of the font you just discovered in your computer, and see when it was introduced. And as I said, do examine period photos of signage to get a feel for how these things actually looked.
Further help in making good choices, particularly to avoid anachronism, can come from a little typeface history, and there are many on-line resources which can be consulted. Among them are these fine websites: http://websitetips.com/fonts/foundries/ (there are even tutorials on the site); http://typophile.com/; http://www.fonts.com/; http://www.fontshop.com/fonts/category/; and http://www.fontbureau.com/.
But even a superficial look at period photographs will show that signage is dominated by sans serif lettering. Notice the term “lettering” and not “typeface.” It is still true today, and was even more dominant before the 1960s, that plenty of signs are painted by signpainters, not printed from type. Luckily there are many signpainter-styled typefaces available today, so this look can be achieved relatively easily in model signs, with careful typeface choices.
Below is a comparison of serif and sans-serif type. The little brackets at the end of the letter strokes are the serifs (pronounced “seh-riff,” not “seh-reef”). The word “sans” is French for “without,” so sans-serif type is without serifs. The serif type here is Adobe’s digital version of Caslon (Caslon dates from the 1720s; among other distinctions, it is the typeface in which the Declaration of Independence was printed), and the sans example is Franklin Gothic, described above. 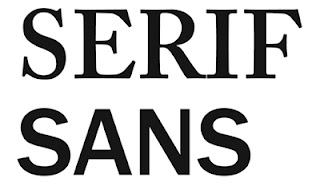 Next is a comparison of signpainter lettering vs. type. The upper example is Caslon again, the lower one is a typeface called Showcard Moderne, based on an actual signpainter’s lettering from the early 20th century. The rounded serifs, slightly slanting letter strokes, and other details are typical of brush-painted lettering.

The dominance of sans serif signage does not exclude serif lettering, but the need for signs to be easily and promptly read means that such lettering tends to be fairly bold and simple in design. Even company logos may have bolder lettering in signage than in, say, letterheads for correspondence.
Let’s look at an example. Perhaps you have a rail-truck transfer at a company called Acme Fast Freight. Assuming it’s not a real company, you have to choose a “look” for its name and signage. Here are some possibilities: 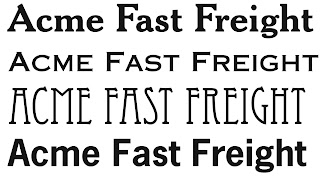 The uppermost of the four examples is Cheltenham, introduced circa 1900 and a very popular advertising face in the 1920s. The second one is Copperplate Gothic, created by the great American typographer Fred Goudy about 1905, and also popular for advertising in the 1920s. Either of these, then, would be suitable for a pre-World War II layout, or even for a later era if Acme is imagined to be a company with a traditional image.
The third example above is a typeface called Eccentric, with a very Art Nouveau look and indeed dating from the 1880s. Only a very retro company would choose such a typeface in the 1950s, although it does have a certain elegance. And finally, the fourth example is a 1908 sans typeface called News Gothic, and like Franklin Gothic, it has been in use from that day to this.
Now let’s say you’ve been running barefoot through the font catalogs, and have found one you really like for your 1950s company. Here’s how it looks.

I would say this choice has a couple of problems. The typeface is Optima, a beautiful face but introduced in 1958, so a little unlikely for 1950s signage. Second, the relatively thin strokes of the letters don’t convey an image of strength or dependability, things a freight company might want to project. Looking at actual signs will show you that this kind of type for this kind of use is rare, and whenever possible, I advocate modeling typical things, not rare ones.
I will show a couple of examples from my layout of signs I think meet the criteria I’m describing. First, the winery at Ballard. The typeface is Hadriano, also created by Fred Goudy, from the 1920s:

This is a serif typeface with old-fashioned look, which could well be a style that a winery would choose. Here’s something quite different, also a Ballard industry, using Franklin Gothic:

This is the look you might expect for a machine shop, so I think it feels appropriate as a sign.
Finally, here is one done in a classic face already mentioned, Cheltenham. It includes the products handled at this warehouse.

The last thing I will mention is that some signage is painted directly onto structures, and for this decal or dry-transfer lettering is the best approach. Here is the sans lettering I used on my lemon shipping building:

The lettering is from an old Champ set called “Railroad Gothic.” Remember that the real goal of most signage is readability from a distance, so, as I mentioned, it is often fairly bold in appearance.
A prototype example of a company name painted directly on the building is this one from Oakland, California, and an industry I will have on my layout, using this wall-painted graphic. This is a commonly seen practice and worth modeling.

Luckily, many suitable typefaces are available on the Internet today for minimal prices or free, at sites like fontspace (www.fontspace.com). Once a particular style has been chosen, one can readily find typefaces of that general character through sites such as Identifont, at http://www.identifont.com.
The content of signs is beyond the scope of this post, but I will just suggest that names need to be appropriate to what is being modeled. A very small building with a one-car siding, named “Consolidated Chemical,” might not be very realistic (unless it is a distribution center or something similar). In the same way, “Fred’s Cafe” is quite believable, but “Fred’s Steel Mill” much less so. Alternatively, “Amalgamated Steel” would make sense for a steel plant name, whereas eyebrows would be raised by an “Amalgamated Cafe.” These examples may seem exaggerated, but next time you’re on a layout tour, look over the industry names and see what you think. Of course, actual business names for the place and era you are modeling are always a good idea (again, provided that your structures look all right with those names on them).
Whether or not you find typefaces interesting, appropriate choices to use on your layout do matter, if you aim at a realistic appearance in your modeling.
Tony Thompson
Posted by Tony Thompson at 12:41 PM

Email ThisBlogThis!Share to TwitterShare to FacebookShare to Pinterest
Labels: My layout, Typography