An important detail of the locations of route card boards for my modeling is for PFE steel refrigerator cars. (This follows my previous post on route card boards, linked here: http://modelingthesp.blogspot.com/2011/11/route-cards-3.html .) I have quite a few PFE cars on my layout, and they need to have correct locations for route cards and the occasional placard. When I looked into this topic, it turned out to be a little complicated.
It turns out that PFE changed location of placard boards, though not of route card boards, on almost every class of steel cars in the transition era, that is, up to 1955. (I model 1953.) I will illustrate this point with photos of the various classes (much more information and additional photos are in the book, Pacific Fruit Express (2nd edition), Anthony W. Thompson, Robert J. Church, and Bruce H. Jones, Signature Press, 2000. The photos I am showing here were chosen to show the route card board locations, not as outstanding portraits of the various classes. The book generally has much better images to illustrate the classes.
The first PFE steel ice cars were built in 1936 and 1937, Class R-40-10. As was common for reefers of many owners at the time, these cars had no placard board. Their route card board was on the side sill tab at the left bolster (PFE photo, author’s collection): 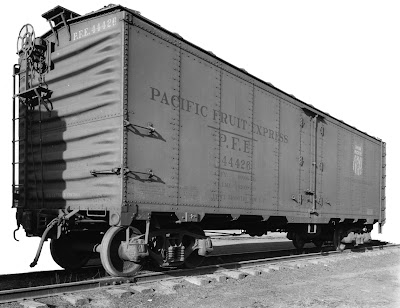 As pointed out in the previous post on route cards, many car types had this left-bolster location for route card boards.
The following class, R-40-14, was built in 1941. These cars continued to have their route card boards at the left bolster, as is just visible here (click on the image to enlarge it), but a placard board, painted black, was applied to the right of the car door (R.H. McFarland photo, Arnold Menke collection):

The next class, R-40-20, was built in 1945. Now a smaller board was added to the left of the door, with the placard board still on the right. The route card board was again installed at the left bolster (General American photo, author’s collection):

Only two years later, in 1947, PFE’s largest class of steel cars was built, Class R-40-23, and now the placard board was moved to the left of the car door and a little higher, and the smaller board seen on Class R-40-20 was omitted. And once again, the route card board was applied at the left bolster (Wilbur C. Whittaker photo, author’s collection):

A route card is visible on this car’s board.
Two more years elapsed before the construction of Class R-40-25 in 1949. Now the placard board remained as in Class R-40-23, but was joined by a smaller board below it. Both boards were now painted orange. The bolster location of a route card board was retained, as can be seen in this view at Los Angeles Shop (PFE photo, author’s collection):

The last class of any size in my pre-1955 discussion was Class R-40-26, built in 1952 and the first class built new with sliding doors. This class had board locations duplicating those of Class R-40-25, including the route card board; all boards were now orange (PFE photo, author’s collection):

It’s worth mentioning, by the way, that all these views are of as-built cars. When a car was shopped in the years after its construction, it normally would have its placard and other boards applied or moved in accord with current practice at that time. Thus older cars in a year like 1953 would mostly have updated board locations. In particular, older cars with paint schemes from later years should definitely have placard board patterns matching the era of the paint scheme.
What about models in HO scale? Without putting too fine a point on it, the simple fact is that few models of steel PFE cars have had a route card board at the bolster (only one I know of is the InterMountain or IM R-40-10 model), and many have lacked or had incorrect placard boards as well.
Here is a photo of an IM model of the R-40-10, having black-white heralds and thus also having the post-1949 placard boards (painted orange); the IM versions of R-40-10 representing as-built cars correctly have no placard boards. I have added a route card to the model’s board, located on the side sill at the bolster.

If needed, placard boards are easily added with thin styrene sheet. The prototype placard board was 16 inches high and 24 inches long, often tongue-and-groove construction so without a visible separation of the boards, or in later years sometimes plywood. I have occasionally scribed the board separations but in most prototype photos they are not visible. The smaller boards on reefer car sides varied, but were often about 8 inches square. The same appears true of the route card boards on steel box car doors.
This model shown below is an old Athearn plastic reefer, representing Class R-40-23, which has had some visible upgrades, including a etched-metal Morton running board, wire grabs, and fan shafts; in addition I have added the placard board originally applied to this class, painted black at that time, and a route card board at the bolster.

Correctly locating placard boards and route card boards is part of my effort to model PFE cars as accurately as is reasonable. After all, when placing route cards on models, they should be in the right place on the car!
Tony Thompson
Posted by Tony Thompson at 9:06 AM