I have received a very pertinent question via email, namely, where were route cards posted when the board for them isn’t obvious? Particularly for older models, on which these details were often omitted, it might not be very clear where they should go.
When there was a placard board on the car door (on a box car) or next to it (on a steel reefer), the route card board is usually not far away. And on a wood-sheathed car, it was often assumed that car clerks would staple onto the wood somewhere, and no route card board might be provided.
But there are exceptions, which I’ll now describe. First, railroads had the option to locate the route card board wherever they wished, and that choice might not be the usual one. For example, several classes of Union Pacific steel box cars had the usual placard boards on the doors, but located the route card board at the left bolster, as shown in this Wilbur Whittaker photo:

Models of some UP box cars have faithfully omitted the route card board on the car door, but have not provided it at the bolster location, so it needs to be added.
In most cases, these boards were eight inches high and 12 inches long, but sometimes they were different sizes or different proportions. A prototype photo is your best guide.
A second point to recognize is that on open-top cars, it was very common to put a route card board near or at the left bolster location, near the bottom of the car side, as in the UP box car above. But many exceptions can be found. Here is an SP gondola, in an SP photo, which despite its wood sheathing does have a route card board, two side panels to the right of the bolster:

But note that the car clerk has ignored the board and tacked the card near the bolster!
And sometimes SP chose to put the route card board all the way to the right end of the car (shown here in another SP photo). This was done on some classes of SP ballast hoppers too. You may click on either of these photos to enlarge them to see details. 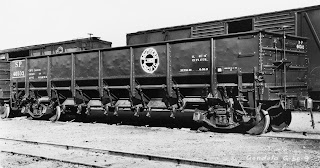 Again, prototype photos are essential to correctly locate route card boards on cars other than house cars, and even on house cars like the UP box car shown above.
On models which don’t have a route card board, or which have one located incorrectly, I just use styrene strip, of scale 1 x 8-inch size, and cut off 12-inch lengths. Of course when a prototype photo shows a route card board of different size or proportion, I try to approximate it by appropriate trimming of the same strip styrene.
I added such a styrene route card board to an Ulrich metal GS gondola model, modified for SP’s Class G-50-12 with two-level Dalman trucks (from Tahoe Model Works). The load in the car is a Chooch product. As you can see, I located the board in accord with the prototype photo shown above. 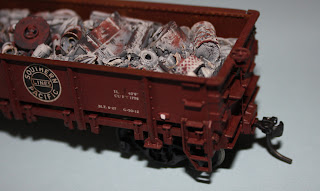 As is obvious in the photo, I have not chosen to replace the cast-on grab iron representations with wire grabs. That Ulrich white metal is hard stuff!
I will mention in passing that the most common car types to lack route cards in prototype photos are open-top cars, so my recommendation would be to “card” most house cars, but maybe only half or so of your open-top cars: gondolas, hoppers, and flat cars.
Lastly, I should mention a usage seen even on cars which did have route card boards: car clerks just stapled the route cards to any exposed wood on the car, such as the edge of tank car walkway (as long as the walkway was wood), or the edge of a flat car deck. Here’s an SP tank car example, in a George Sisk photo taken at Kansas City in 1959: 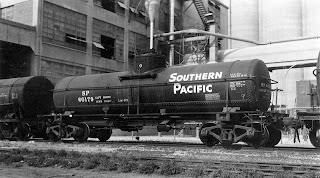 Note that the car does have a route card board, just to the right of the ladder, above the walkway, but the clerk ignored it and placed the route card where he thought it would do the most good. Here is my version of it, using a W.A. Drake brass model of the same SP tank car class as the prototype photo (O-50-14):

I used yellow paper for this one.
Route cards add visual interest to freight cars, even though they are quite small, because they are light colors and are eye-catching. And I believe it is interesting to model both standard route card locations (on the board provided), and also the different kinds of route card locations which are not on the boards. If you haven’t applied any route cards yet, give it a try and I think you’ll like the effect.
Tony Thompson
Posted by Tony Thompson at 5:18 PM