There are several ways in which computer techniques can be applied to a waybill system. I’ve already written about the computer applications I use for my waybill preparation. But this post is about computer usage in car flow management. I will just describe a couple of examples, rather than try to be comprehensive.
One issue sometimes raised is the waybill selection process. Simply drawing the next waybill for a particular industry from the front of a stack, and returning used ones to the rear of the stack, strikes some as too much of a fixed sequence. One can of course shuffle the waybill stack from time to time, but there are those to whom the resulting overtones of a card game are bothersome. I experimented with a computer method to select upcoming waybills. Here is how it works.
For a particular industry, say a packing shed, a certain number of waybills has been created, let’s say 22. These are all outbound loads of produce and so are essentially interchangeable. We now want to select one of those 22. In Microsoft Excel, one can set up to do this with random numbers. For this simple example, this is pretty easy to do. Excel contains a random number generator, and if you don’t have an Excel manual or after-market guidebook, there are on-line directions for how to set it up. Here is a link to one example:  http://www.mariasguides.com/2007/06/28/random-number-generator-for-excel/ . You can readily Google others.
This method delivers a number, between 1 and 22 in this example, which corresponds to one of the 22 waybills. This of course implies that the waybills are numbered for each industry, and for convenience in use, would need to be filed in numerical order. Then locating bill 17, if that number is selected, is a quick process.
But this example, the 22 waybills for outbound produce loads at a packing shed, is pretty simple. Most industries, including packing sheds, do have other traffic (such as shipping boxes inbound at a packing shed), and so waybill stacks may have to be sorted by car type or by inbound vs. outbound. Those kinds of details are present in the tables I show below, and in fact I have separated inbound and outbound traffic waybills for a couple of my larger industries. That means that the Excel method has to be refined a little further.
To illustrate the coding I used, I show a table from the prior post on waybill scheduling (at: http://modelingthesp.blogspot.com/2011/11/operations-demand-based-car-flow-2.html ). This contains 10 days of inbound car movements for two towns, each having three or four industries and a line for “random” or unusual waybills

The first step is to code the industries and car movements. Here’s what I did. I gave the industries arbitrary numbers (510 series for Shumala, 520 series for Ballard), and for each car requirement, created a two-digit code. The first digit has the values of either zero, one or two, denoting no move, an empty car, or a loaded car. The second digit has values 1 to 9, denoting car types. I won’t list them because they are indicated in a footnote to the following table. Then the exact same table as shown above looks like this: 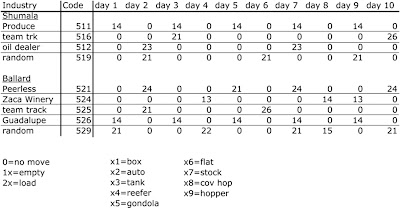 Though presented as a text table, these are the entries in my Excel file, with each cell shown as presented. With the foregoing descriptions of codes, you can see that this is the same as the table shown above. The one thing that may appear different is that in the upper table, “random” entries are present for a third town, Santa Rosalia (SR), and those are omitted in the Excel table.
I ran a number of experiments with this Excel set-up, and was pleased to find the random-number-generator approach worked fine and did deliver waybill numbers in a satisfying and varied way. But it’s worth mentioning that a relatively random selection of waybills can be accomplished just by grabbing a waybill from somewhere within a filed stack. For limited numbers of waybills, this may be less effort than formally generating random numbers.
I should further emphasize that the Excel technique described above is only a method of randomizing the selection of waybills, not a waybill creation method nor a scheduling method. Waybill creation directly in the computer is being explored by a number of modelers around the U.S. In most cases I’m aware of, they are using Excel. A serious limitation (to my way of thinking) is that the scanned railroad graphics I use at the head of my waybills can’t readily be inserted into Excel waybills. I very much like the effect of the actual railroad graphics and it’s become a feature I especially value about my system.
I know of at least one person who is using the random-number generator in Excel to do scheduling, that is, to identify industry car demand by a random number. To me, this misses the entire purpose of a demand-based car flow approach: to duplicate the regular or periodic patterns in car movement as well as the relatively random ones.
This Excel experiment was only intended to illustrate how a very large layout, with large numbers of waybills and industries, might go about pulling the waybills to fulfill a schedule. On my relatively small layout, I don’t have any difficulty or delay in simply consulting a paper copy of my distribution schedule.
Tony Thompson
Posted by Tony Thompson at 10:40 AM