My column on Waybills in Model Railroad Hobbyist

Probably most readers of this blog know that there is an electronic magazine out there, called Model Railroad Hobbyist or MRH, now issued monthly. It covers a range of topics every month, and can be downloaded free at: http://model-railroad-hobbyist.com/magazine/mrh-2012-05-may .
Fewer readers perhaps realize that I am part of a cycle of writers who sequentially produce a column called “Getting Real,” about prototypical modeling (the others include Jack Burgess, Mike Rose, Marty McGuirk, and MRH publisher Joe Fugate). The latest issue, for May 2012, was released today and has my latest column in it, all about model waybills. It really will have little new in it, for anyone who has read and digested the various posts on waybills of this blog, but does collect in one place a whole range of ideas, and includes some new waybill images and model photos. If you would like to check out the magazine, the link above is to the site from which you can download the May issue.
The article generally turned out well, and for the most part I like the way it is laid out and presented. (I would not have used tinted page backgrounds, but that’s another discussion.) The only problem I’ve seen is that in modifying my original figure numbers, they lost a figure. Using the figure sequence in the article, it should lie between Figures 22 and 23, so maybe it could be called Figure 22B. You can see the omission when you read the caption for Figure 23, which says “Here is that lumber load,” but no other information is given. Here is what was supposed to precede Figure 23, what I just identified as Figure 22B: 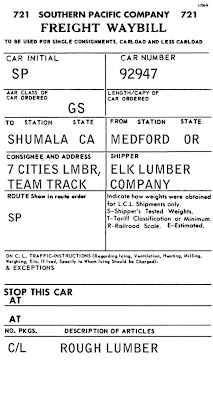 The caption for it reads, “Waybill, 2 x 4-inch format, for a load of lumber in a gondola.”
The error, of course, is not serious and I only correct it here for completeness, Writing this column has proven to be an interesting exercise and I’m looking forward to future columns.
Tony Thompson
Posted by Tony Thompson at 9:55 AM

Email ThisBlogThis!Share to TwitterShare to FacebookShare to Pinterest
Labels: My layout, Waybills