The concept of waybills controlling cycles of car movement is something familiar to any modeler who has operated freight trains. Some of these cycles are simple and easily explained, others can be complex. The modeling challenge is to reproduce them efficiently and realistically. In a previous post, entitled “Waybills-21: understanding waybill patterns” (view it at this link: http://modelingthesp.blogspot.com/2012/04/waybills-21-understanding-waybill.html ), I talked about fairly simple waybill cycles of loads and empties, simply moving in opposite directions over the layout. Here I would like to discuss more complex cycles.
My examples in this post are from Frank Hodina’s new system. He is modeling a variant of the Chicago & Illinois Midland, which he calls the Chicago & Illinois Western, and it has the same kind of extensive coal traffic as did the C&IM. I showed one of Frank’s waybills in a previous post (available at: http://modelingthesp.blogspot.com/2012/03/waybills-20-other-approaches.html ). For his coal-handling cycle, cars are loaded at a mine, then weighed at a different location, then forwarded to destination. This means that a complete cycle for one of his coal gondolas uses several items of paperwork.
The starting point for all of Frank’s freight car documents is the prototype. For example, here is a prototype C&IM waybill for coal from a particular mine. (You can click on any of these images to enlarge them.) 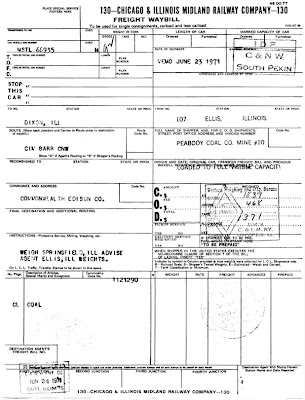 I won’t dwell on this waybill, but it will be evident in what follows that the model documents are closely patterned on it. The prototype is 8.5 x 11 inches, and to maintain those proportions, Frank’s model waybills are 4.25 x 5.5 inches.
Frank’s model coal gondolas look like this, obviously drawn from the prototype C&IM. This is CIW 7084, for which the paperwork I’m showing was created.

We can begin with this car being loaded at a Peabody mine in Ellis, Illinois. The car is moved to Springfield for weighing, and the waybill notation says, “advise agent Ellis, Ill.” of the car weight. Note the colored box in the upper left corner of the bill. This is a coding for the destination, and is an aid to train crews. This waybill may be compared to the prototype C&IM bill shown above, and the many close similarities noted. 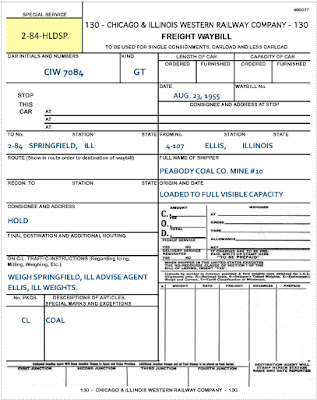 Once weighed, the car is forwarded to Havana, Illinois (on the Illinois River) for transfer of its cargo to barges which will take the coal to the final customer, Consolidated Edison in Chicago. For that movement, a second waybill is used: 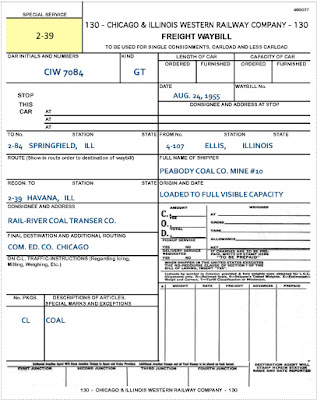 When the cars are unloaded at Havana, they are then sent back to Springfield to be held for loading. Thus the Empty Car Bill which is used only directs them as far as Springfield, from which they might be directed to any of several mines. Here is the paperwork:

When the car is selected to return to the Peabody mine no. 10 in Ellis, Illinois, another Empty Car Bill is made out for that movement.

It is worth emphasizing that all these bills are, in a sense, conventional bills, in that they are documents for individual cars. Some of them are different from what most modelers are accustomed to, in that they document movements to destinations other than customers (in the usual sense of the term), but they are still individual car documents. In that sense, they resemble the Montour Railroad coal paperwork I showed in a previous post (see: http://modelingthesp.blogspot.com/2012/04/waybills-23-cuts-of-cars-update.html ).
I emphasize this point because there is another side to this story, in handling cuts of multiple cars with single documents, an approach Ted Pamperin presented in his fine article in Model Railroader (February 2012, pages 45–49) and which I described in my original post on that subject (see: http://modelingthesp.blogspot.com/2012/04/waybills-23-handling-cuts-of-cars.html ). I will pursue further that side of the topic in a future post.
But returning to the present post, to me, these model bills by Frank Hodina are an interesting and highly realistic reproduction of specific prototype patterns for freight car movement.
Tony Thompson
Posted by Tony Thompson at 12:55 PM