In this post, I want to describe resolving a situation often encountered in freight car modeling: how long did a particular car group last in service, and which cars? This can be quite difficult without access to specialist documents. Recently on the “Espee” list on Yahoo Groups, this subject came up and was discussed relative to the SP Class A-50-4 automobile cars. I will present the core of that discussion, with some expansion of the information.
The key information for this case is found in the Car Ledgers maintained by SP until about 1960 (when computer record-keeping took over).  After the merger of SP into UP in 1996, Steve Peery and I were able to acquire the entire set of these Ledgers which were in use at 1960, eleven volumes in all. This set superseded an earlier set, containing information from the 1890s to about 1920, which are at the California State Railroad Museum (CSRM). Once I have completed use of these Car Ledgers for research, they too will be donated to CSRM.
The volumes in my possession appear to have been begun in 1920, likely after the return of U.S. railroads to private control after the United States Railroad Administration (USRA) had operated them during the World War I traffic emergency. The good news contained in that date is that older car data were copied into these volumes to make a complete record, instead of keeping the prior Ledgers in service; but the bad news is that a few car classes which had been entirely scrapped over the 40-year service of these Ledgers had had their Ledger pages discarded. So there are a few data missing which the date range alone would suggest would be present.
These eleven Ledger volumes were the research core for the five-volume book series I wrote, Southern Pacific Freight Cars. (If you wish, you can read more about these books, or even order them, at the Signature Press website (http://www.signaturepress.com/ ).
Now I will turn to the Class A-50-4 automobile cars. Background: in 2005, Speedwitch Media made an HO scale kit of this car, for the SPH&TS convention that year. The instruction sheet for the kit implies that this class was scrapped without applying AB brakes (they were built with K brakes), and thus would have had to be all gone by the 1953 date at which K brakes were outlawed in interchange. But in this regard, the instruction sheet is incorrect.
A fair number certainly got scrapped in the 1948–1953 time frame, but many of the cars received AB brakes before that. I can make this statement because the date of application of AB brakes is given in the Ledger for every car. I show below a pair of Ledger pages, facing pages for this car class, since all the information would not fit onto a single page. Car numbers are down the left side of each page (click to enlarge). The handwriting looks very small, because the original Ledger sheets are 14 x 17 inches, obviously considerably reduced as shown here. 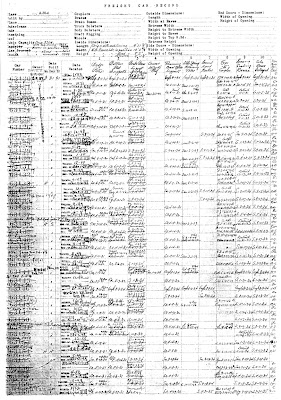 Car 63140 is one of the cars which survived into 1953 (see below), and its retirement date, May 1953, is shown in the first column to the right of the column with built dates. Next is the facing page; column 18 shows AB brake application. 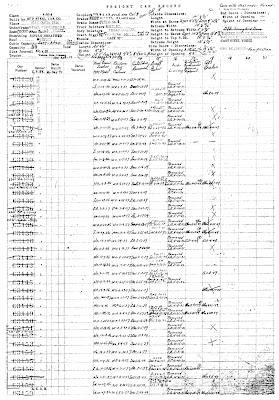 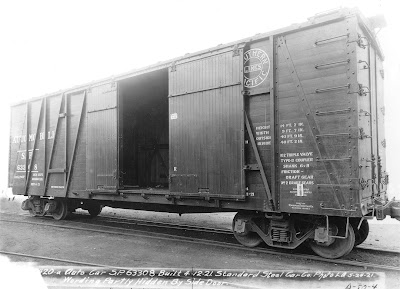 The “door and a half” design is evident, as are the end doors. The door opening as built was 10 feet, 5 inches, but in the early 1930s all these cars had their door openings widened to 12 feet, at which point they received a pair of equal-size doors. It is that modernized form of the car which Speedwitch modeled, with the interesting “steep” diagonal brace arrangement in the first panel to the right of the door.

This SP photo from Sacramento in 1933 shows a car with the wider doors and that “steep” brace.
That covers what I wanted to say about using the SP Car Ledgers. Obviously the particular case of the A-50-4 cars is only one of many instances in which these ledgers provide far more information than usually available for freight cars.
Tony Thompson