A question I have been asked, both in live clinics and after some blog posts, concerns how one determines routing of shipments, which would have been listed on waybills. (From the modeling perspective, this applies to creating accurate waybills, for those who find this topic interesting.)
There are several obvious starting points, the best of which would be a file of actual waybills for your area and time period modeled. But very few of us have access to such a resource. Other rarely available but potentially rich sources include material from traffic officers who worked for shippers (paper or interviews), and railroad traffic analyses with data on junction activity—for which you would ideally have material from a whole bunch of railroads. Again, these are rarely if ever available.
Here is what I’ve done. I start with the overall geography. I have a book of state railroad maps (a Kalmbach reprint of a Rand-McNally original), which helpfully shows main and branch lines with different line weights. It’s a 1928 document, so in some cases it’s necessary to be aware of later-day ownership and line changes. Here’s the cover of that Kalmbach book, which is often available from used book dealers on the Internet. 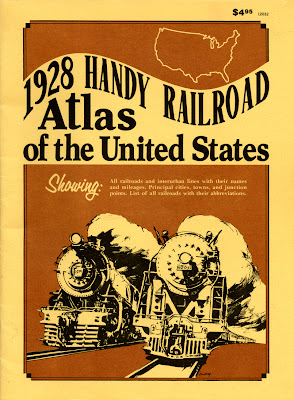 In addition to this version, there is also a 1948 edition of this book from Rand-McNally, available used on the Internet. I purchased it awhile back, and in truth it doesn’t add a great deal to the 1928 version. Or to put it another way, I think you can work equally well from whichever one you happen to acquire. 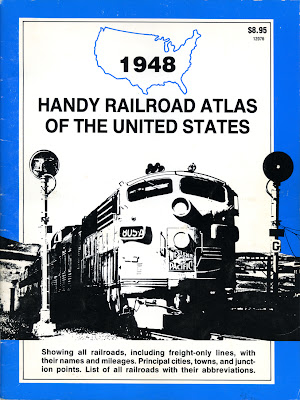 In using either book I just try to see what routing could work, to make a more or less direct car movement. As another option, every railroad entry in the Official Railway Equipment Register has at its end a list of junction points, so you could use those to some extent, but you need to know where the lines themselves ran, and via which junctions.
What about “approved routings?” Just as with tariffs, the ICC approved certain routings and not others. Especially in the eastern U.S., just about any possible routing would be an “approved routing,” so one can be reasonably prototypical with almost any choice. In the west, though, not all routings were officially “approved routings,” so you have to be more careful to use major interchange points. The “approved routing” books were regional and quite fat, and car clerks were expected to check waybills to ensure that routings were okay.

General railroad knowledge helps too, such as knowing that UP received practically all its traffic from the east at Council Bluffs, or that both T&P and T&NO handed off westward traffic to SP at El Paso. For Chicago transfers, Jerry Stewart told me that routing would not ordinarily specify which railroad (EJ&E, IHB, etc.) would handle connections through the Chicago area, as that was up to local yardmasters and operating schedules, and the waybill would just identify Chicago as the junction. That’s what most of my waybills do also.
From what former employees have told me, and what I’ve read, some shippers would let the agent choose the routing, or at least make suggestions, and naturally the agent would move the shipment as far on his own railroad as physically possible. But shippers had the absolute right to choose routing for themselves (still subject to being an approved routing), and large shippers typically had one or more traffic people who were responsible for getting shipments to customers. They might not use that much of their host railroad, if they believed some other routing would be faster or more dependable (or if they had some relationship to personnel on other railroads). That’s why you really can’t know for sure how most cargoes would be routed.
Given all this background, here is a single example from my layout, of a waybill for a reasonably long-distance shipment. 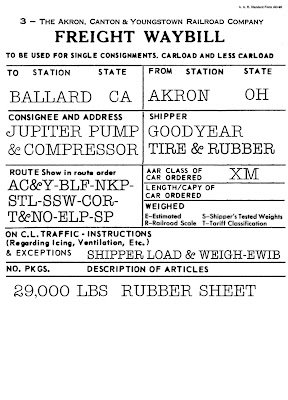 Junction points shown here are at Bluffton, Ohio (BLF), St. Louis (STL), Corsicana, Texas (COR), and El Paso (ELP). Is this accurate? I don’t know, but I believe it to be reasonable. The typeface in the body of the waybill, incidentally, is American Typewriter.
Not everyone will find this topic interesting, but if you do, as I do, it’s a gratifying and enjoyable effort to construct realistic routings for your model waybills, and of course to fill out the waybills accordingly.
Tony Thompson
Posted by Tony Thompson at 11:06 AM