One of my earliest blog posts was about choosing a model car fleet, and I illustrated my points with the cars of Pacific Fruit Express. The prototype information used in that post was taken from the book, Pacific Fruit Express (2nd edition, by Anthony W. Thompson, Robert J. Church and Bruce H. Jones, Signature Press, 2000; the book can be readily ordered on-line at a variety of sites, including: http://www.signaturepress.com/pfe2.html ; scroll down to order). If you would like to view the earlier post, it can be seen at this link: http://modelingthesp.blogspot.com/2010/12/choosing-model-car-fleet.html . It’s mentioned there that I model 1953, so my choices in this post regarding car modeling are naturally directed at that year.
In my talk about Pacific Fruit Express at the joint PNR-PCR convention a weekend ago, I talked briefly about the PFE car fleet in the same terms as in that original post, cited above. That was Part 2 of my talk. Part 1 of the talk was about PFE traffic to and from the Pacific Northwest. (The talk outline was shown in my post about that talk, which also links to the handout about PFE traffic; it, along with some brief remarks about the meeting, is at: http://modelingthesp.blogspot.com/2012/05/handout-for-pfe-traffic-talk.html .)  As a way to introduce Part 2, I showed the table below, which represents the core of my thinking on the subject. It contains data from the PFE entry in the January 1953 Official Railway Equipment Register. 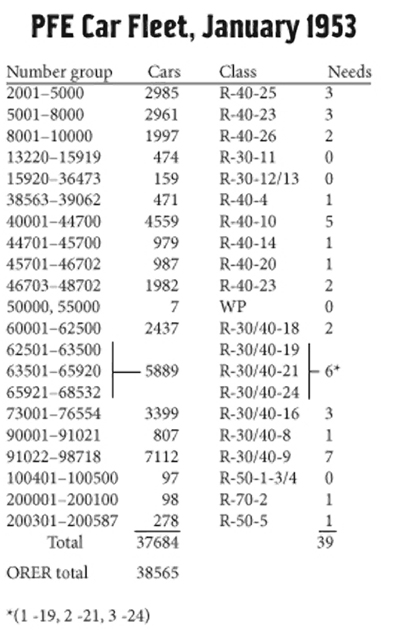 The idea behind the right-hand column in this table is the proportioning of a model car fleet, by the ratio of one model car for each 1000 PFE prototype cars—give or take. Those values in turn identify the car classes you most need, and the numbers of cars from each class (those are the numbers in this column). Of course there is no need to be precise or even terribly consistent about these numbers of cars, and in reality a sample viewing along the railroad in 1953 would almost never be proportioned exactly by class size. But it’s a starting point.
Here are a few of my models so far, to satisfy these needs. I do have several cars yet to do! To start, one of the largest groups, the 60,000 series, is represented by this R-40-19 car (an InterMountain RTR production version of Terry Wegmann’s excellent parts). I don’t yet have 6 cars in this series, but I’m getting close. 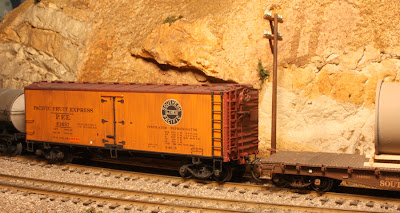 Next is a stand-in for what is actually the biggest class group, the 91,000 series as it might be called, Class R-30/40-9. (This class, like several in the table above, was rebuilt from older cars of both R-30 and R-40 classes, thus this notation.) This car was modified from the Train Miniature wood reefer, and is scheduled to be replaced by a more refined model from Red Caboose. It is shown being spotted for icing. 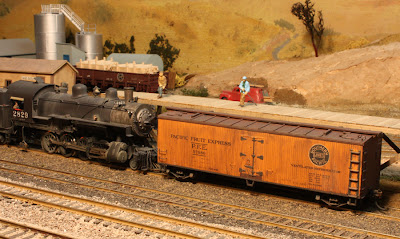 My table shows a need for five cars of Class R-40-10, and here is one of the ones I have completed so far, built from an InterMountain kit (shown at the winery in Ballard on my layout, picking up a cargo of wine in barrels). 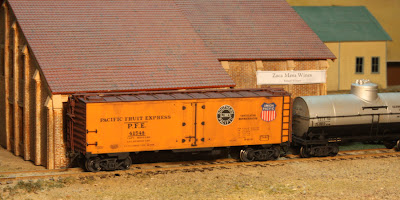 My table also calls for five cars in Class R-40-23. My version is again an InterMountain model, but this one was purchased RTR and then weathered lightly, since it is modeled with a later paint job than it had when it was new. It’s a load and is being picked up by the Guadalupe local after initial icing. 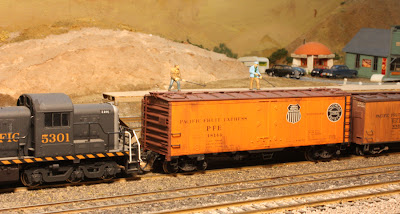 The class following R-40-23 was R-40-25, a very similar car but with a diagonal-panel roof. My analysis calls for three of these cars. InterMountain has done this class also, as seen here in a passing train. 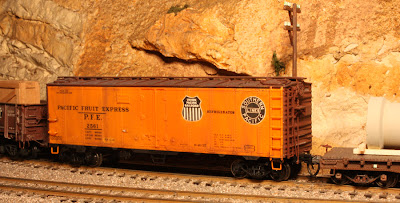 One other class big enough to deserve three models is the interesting transition class R-30-16, with steel roofs and wood ends. My model, shown being switched at Shumala, is built from a kit by the late, great Terry Wegmann. You may have seen it in the posts that described construction of this model (see: http://modelingthesp.blogspot.com/2011/09/small-modeling-project-pfe-r-30-16.html ). I wanted to show my second model of this class, but it’s not finished yet! so I decided to repeat the older photo. 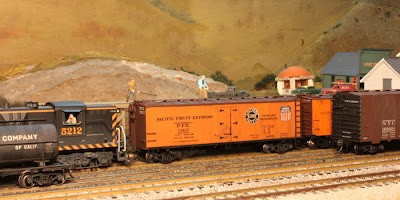 Finally, the table includes a number of classes with fewer than three cars. I will just show a single example, a 47-foot car of Class R-50-5, built from a Sunshine kit. It is shown spotted for unloading frozen food at Peerless Foods in Ballard, the main use of this class after they were rebuilt with heavy insulation. 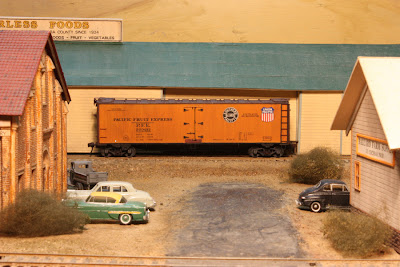 As I stated, I am still working to complete the PFE model fleet that I want to operate, but things are coming along well. And since I am pretty much following the numbers determined from the table at the top of this post, I believe I am creating a good representation of PFE’s cars.
Tony Thompson
Posted by Tony Thompson at 11:06 AM