Many modelers take model railroading fairly seriously, and lots of the time I do too. But not always. Sometimes humor just sneaks its nose into the tent. This post is about a few of those noses.
What was probably the first of these little events was inspired by some of my fellow modelers in Division 2 (Pittsburgh) of Mid-Central Region of NMRA. Division 2 had and still has an annual “Jamboree” each March, and a few people had been bringing humorous display models. I was about the only SP modeler for many miles around, and my idea resulted in this model:

The SP decals were intended for an Alco PA, and fit perfectly on the GG1 body. But the real fun came after I put it on display in the model room.
Part of the intent of my GG1 was to tweak the many Pennsylvania Railroad fans in our division (Pennsy enthusiasts being noted for entirely lacking a sense of humor about their railroad). And the very first person I saw, minutes after anonymously putting my model on display, was one of those serious Pennsy people. I was the first person he ran into as he came striding out of the display room, and he immediately went into full rant mode.
“Did you see what some person did to a GG1? in the display room? I can’t believe someone would do that . . .” and all this time I could see the little wheels going around in his head. The rant sputtered to a stop and he looked at me as if seeing me for the first time, and the penny dropped. “It was you! it was you!” he exclaimed. “Yes, it was,” I replied, “and you just did what I hoped somebody would do!”
About that same time I had been told by a West Coast modeler that SP and Santa Fe employees at the time liked to pronounce “Union Pacific” as though the first two letters were the prefix “un–” instead of the usual “you-n.” So to capture that pronunciation, I decaled up a box car as “Onion Pacific,” doing the two sides differently—I even modified the UP shield to reflect the spelling change (click to enlarge).

I used to slip this car into trains at the old Pittsburgh Model Railroad Club on Pittsburgh’s North Side, and was pleased that usually somebody noticed.
I happened to be planning to attend the Santa Fe Modeling Society convention in the summer of 1995, the year of the merger of Santa Fe with Burlington Northern to form BNSF. I thought it might be fun to spoof what Santa Fe fans could expect with the new regime, so cobbled up a “warbonnet” paint scheme on an F unit, but in BN colors. This is what it looked like: 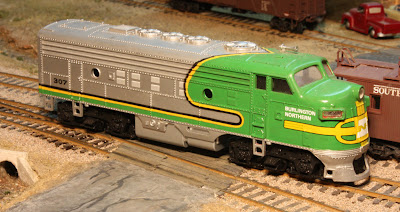 But the joke, such as it was, fell kind of flat, and no one at the convention seemed to find it too amusing. At the time, my own favorite Southern Pacific hadn’t yet fallen to Union Pacific, so perhaps I didn’t appreciate the depth of feeling that can accompany such an event.
There was another event that wasn’t intended as a spoof, but suddenly I could see it coming, right before it happened. It came about this way: my Pittsburgh layout featured a freelance short line, the Lompoc & Cuyama, which interchanged with the SP’s Coast Line (that aspect was written up in the article about my layout, in the Railroad Model Craftsman issue for June 1990, pages 64 to 69). I wanted to choose a “standard caboose” for the L&C, which I thought should be a Western prototype and not too large a car. Both Westside and Beaver Creek had imported brass models of the Yosemite Valley caboose no. 15 in brass. It just struck me as a good-looking caboose, so I chose it, and was able to buy a bunch of the cars from a dealer at a modest volume discount. Naturally I started painting them up for L&C, and gave them various numbers in the 50 series. Here’s how they looked, with the L&C’s only diesel in the background: 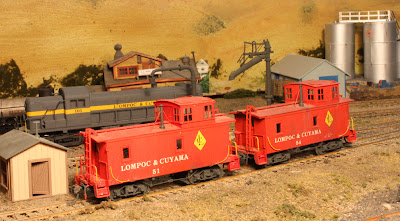 So why could this turn into a spoof? At the 1990 NMRA National Convention, which was held in Pittsburgh, my layout was on tour, but even before tours started, I was one of a few layout owners who hosted operating sessions for clinic presenters (as a kind of thank-you for their contribution). One who came to my house was Jack Burgess, rightly famous for his superb layout which represents the Yosemite Valley. It wasn’t until Jack was on the way down to my basement that I suddenly realized what was going to happen when he caught sight of my caboose track – because it looked like the photo above, with a line-up of YV no. 15 cabooses painted L&C.
Sure enough, Jack spotted the cabooses right away and kind of gagged. “But,” he sputtered, “there was only one of those.” Struggling to keep a straight face, I answered, “Well, not on the Lompoc & Cuyama.” I really think the look on Jack’s face was as close as you can come in modeling to undisguised horror at the sacrilege. But maybe I was over-interpreting.
As I said at the outset of this post, I’m usually reasonably serious about model railroading, and try to follow prototype examples as much as practical. And my layout no longer features an imaginary short line. But every now and then, I just can’t resist something a bit less solemn.
Tony Thompson
Posted by Tony Thompson at 11:00 AM