I have often said that regional oil companies are one of the ways to solidify the identity of the area you model. In my case, those are California companies, and in the 1950s, when I model, there was a kind of “Big Three” in California oil. They were Standard of California (now called Chevron), Union Oil (now part of Phillips) and the Associated Oil Company, the subject of this post. Associated is of particular interest because for a number of years, it was connected to the Southern Pacific. Understanding this company has implications both for bulk oil dealers and for tank cars, and I intend to model both; I am working on a model of an Associated bulk oil dealer.
Finding good historical material on Associated is not simple, and some of what is on the internet at the moment is pretty garbled, including a few erroneous statements. I have been researching this topic at some length, and now have made a document with a set of facts referenced to authoritative sources (see bottom of this post). Over time, I hope to direct the attention of the owners of the erroneous pages to my document, in the hope that they will correct their misstatements, and I have made a few relevant edits to the Wikipedia pages on Associated Oil and on Tidewater Associated.

Here is a brief summary. Around 1900, a number of small oil producers in the Kern River oil field, north of Bakersfield, experienced difficulties storing and marketing their oil once it was out of the ground. Standard Oil (Iowa), the name at that time of the part of the Standard Oil Company operating in California, was preparing to come in with all its known ability to dominate those parts of the oil business, so the small companies formed a new company to manage storage and marketing. They incorporated as the Associated Oil Company on October 7, 1901.
Unfortunately, it was soon evident that they did not have even close to the amounts of capital required. In 1902, a new investor came on board: E.H. Harriman, buying enough Associated bonds to give him the dominant voice in Associated. He seems to have bought these bonds on his personal account, rather than for Southern Pacific. But in 1906, SP did buy the bonds from him, probably at his direction. In 1909, SP would sell some of the bonds, but buy 50.4 percent of the Associated stock, giving SP full control of the company.
Southern Pacific also owned a lot of oil lands of their own, and had formed a subsidiary company to handle production and sale of oil, the Kern Trading and Oil Company. Some of the SP’s oil was sold to and refined by Associated, but SP also had a deal with Standard, to exchange crude oil for fuel oil (not one to one, but at an appropriate ratio to reflect the greater value of crude). Fuel oil was also purchased by SP from Associated and other companies.
Starting in 1909, several government suits had gone after SP and other railroads, seeking to return granted land to the government if it contained mineral values. The suit against SP only caused a small proportion of the land owned to revert to the government, but SP decided the time had come to get out of the oil business.
In 1919, they set up a complex transfer to accomplish this goal. A new entity, Pacific Oil Company, was created as of January 1, 1920. Pacific sold all its stock to SP, which in turn offered the stock to its own stockholders. In short order, nearly all the stock was sold, reimbursing SP for its stock purchase. Meanwhile, Pacific bought all of SP’s oil lands, and its stock in Associated Oil, using the money they had received from the stock sale.
It seems likely that Pacific Oil was not intended as a long-term operation. After a few years, negotiations were completed to sell off all its holdings. The former SP oil lands and facilities were all sold to Standard Oil of California on January 1, 1926. This was the larger part of the Pacific Oil property.
The rest of Pacific Oil, the controlling stock ownership in Associated, went elsewhere. California Standard did not buy it; instead it was sold to a new holding company, formed in late 1925, called Tide Water Associated Oil Company. This company also acquired at the same time the stock of the Tide Water Oil Company, a New Jersey company dating back to the 1880s. The largest stockholder in Tide Water for some years had been Standard Oil of New Jersey. It seems less than coincidental that both parts of Pacific Oil’s holdings went to Standard companies. Though broken up into “baby Standards” by an anti-trust suit in 1911, the original company continued to have a ghostly presence in the form of cooperation among the “babies” and in the use of Union Tank Line tank cars.
Speaking of tank cars, here is a 1920s photo in central California of Associated tank car no. 147, an image from the Arnold Menke collection. 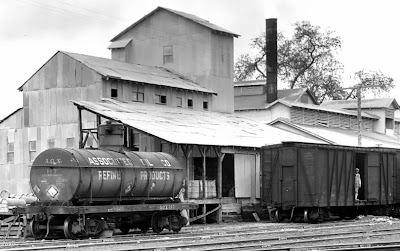 When the Tide Water Associated holding company was formed, the immediate impact on the two components was minimal. Both continued to market in their respective territories under their original names. Tank cars of Associated continued to use the reporting mark AOX, as they would into the 1950s, and those of Tide Water used the mark TWOX. There was also a third mark, TIDX, used for the cars assigned to Tide Water’s refinery near Tulsa, Oklahoma.
In 1936, the two companies, Associated and Tide Water, were merged into a single entity, Tidewater Associated Oil Company, and the formerly separate companies were dissolved. But the separate company names were still used for marketing. The new company operated with three divisions: Tidewater Eastern Division, centered on New Jersey; Tidewater Midcontinent Division, centered on Oklahoma; and the Associated Division in the far west. Again, these divisions used the TWOX, TIDX, and AOX reporting marks, respectively.
Here is a photo of an AC&F-built Associated car at Tacoma, Washington, on February 19, 1955, taken by Colonel Chet McCoid, from the Bob’s Photo collection and used with permission. Note that the reweigh date on the car is April 1921.

In this same period, J. Paul Getty was attempting to gain control of Tide Water Associated. It would be more than a decade before Getty would finally obtain control of the holding company which held Tidewater Associated’s stock, Mission Corporation, and thus eventually of Tidewater Associated itself.
The trademark for Associated’s gasoline products had been “Flying A” since the 1920s.  Tide Water Oil had been using the trademarks “Tydol” for gasoline and “Veedol” for lubricants. Gradually these trademarks became used across the company. By the 1950s, Flying A was the name for gasoline sold throughout the system. The Tydol and Veedol names were also in use system-wide, both names now used for lubricants and other products. But on tank cars, the Flying A emblem was ordinarily used only on TWOX cars in this period. Here’s an example, again from the Bob’s Photo collection. 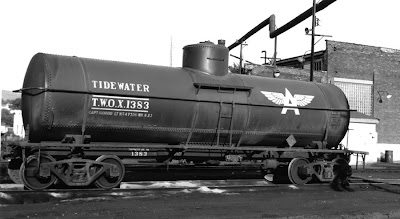 This is a General American tank car, built in June 1923 and still with that weigh date, although the photo dates from the 1950s (photographer unknown).
My full document describing Associated Oil Company history, complete with citations to published sources, is available on Google Drive, at the following link:

Email ThisBlogThis!Share to TwitterShare to FacebookShare to Pinterest
Labels: History