I have mentioned in a number of earlier posts about my layout, that Southern Pacific’s main line of the Coast Route in California has a junction with my imaginary branch line at Shumala, a little south of Oceano. Specifics of my layout locale were discussed in a prior post also; you can see those comments at: http://modelingthesp.blogspot.com/2011/01/layout-design-locale.html .
An essential part of this junction is a small engine terminal (discussed earlier at: http://modelingthesp.blogspot.com/2011/04/modeling-engine-terminal.html ). Considering the operation of several SP branches I know about, a number were operated with locals which simply originated at the nearest division point. Upon completing their work on the branch, they would then return to that origin. That would mean that branchline engines were housed and serviced at the division point. But when the run from the division point was lengthy, or when there was enough traffic, the branch had engine facilities of its own, naturally modest in size. Given that Shumala is not very many miles from San Luis Obispo, but wanting to include some engine facilities, my choice was clear: I surmised that there had been enough traffic (in the past) to require a branchline facility at my junction.
Needing a small structure, and wanting it to be typical of SP practice, I chose the Banta Modelworks kit, no. 2097, for the SP roundhouse at Port Costa, with only two stalls. That should be sufficient for the needs of my branch. As I mentioned in the post about my engine terminal plans (the second one cited above), this Banta kit was reviewed by Jimmy Booth in the Southern Pacific Historical & Technical Society magazine Trainline, issue 104 (Summer 2010), page 4.
I decided not to build the kit with inspection pits inside the structure, partly because they would be all but invisible with the orientation the structure will have on my layout. That freed me to depart from the Banta recommendation to build the structure on a base, which would make the tracks permanently attached inside the  building. I wanted to have the ability to easily clean tracks, which I can achieve with the lift-off roundhouse I will build.
My first step, then, was to place the roundhouse tracks in alignment with the existing turntable. I used Micro Engineering Code 83 track, as Banta recommends, and attached it with Barge Cement.

The photo above shows the two converging roundhouse tracks, and outside of them, experimental placement of two additional tracks to the left of the turntable, one on each side of the roundhouse tracks. The tube of Barge Cement happens to be in the view also. At this point I dropped electrical feeders from the outer ends of both roundhouse tracks.
The tracks, of course, are laid out so they exactly fit the roundhouse floor. Here is the floor shown in place. It has been rubbed with walnut stain, and dirtied with dark gray and black paint patches. The part nearest the camera is the office and boiler house floor, which will not be visible in the completed model. 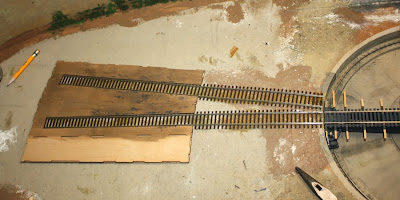 The first steps in adding parts to the structure are the various interior walls, ingeniously all laser cut from single pieces of plywood. I won’t spend time going through what is, after all, in the kit directions, but will show some in-progress views for flavor. Here is the first group of frames, all laser-cut as single pieces from thin plywood and remarkably strong. 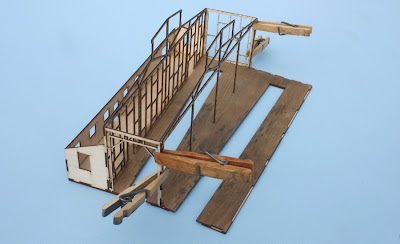 You can see that I am using reversed clothes pins as clamps, as I usually do. They are so useful I find myself reaching for them on almost every project.
In the structure shown above, the left-hand section contains an office for the roundhouse foreman and his clerks, a boiler room to provide steam for the roundhouse and garden track, and locker rooms for both roundhouse workers and train crews. I will add onto the structure in the form of a small machine shop behind the rear of the boiler house section.
With all framing completed, it looked like this. The walls in the foreground are inner walls, and will have sheathing applied over them. 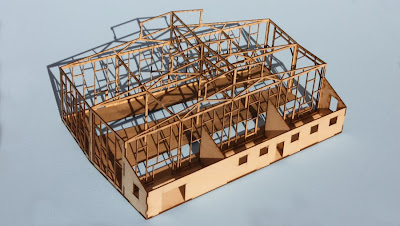 It’s worth mentioning that this kit goes together perfectly. Everything fit as it was supposed to, at least as far along as this point.
Before attaching sheathing, I colored all exterior walls the same basic way I colored the floor, as a wiping stain, using a cotton cloth. The color is boxcar red. This gives a kind of faded color, which is probably appropriate for a structure like this one. At least as early as World War II, SP standard paint for utilitarian structures like roundhouses and shops was boxcar red walls, black trim around doors and windows, and white window sash.
Prototype photos of the Port Costa roundhouse illustrate this scheme, showing lighter walls with black trim around doors and windows, and white sash. The detail of a Fred Matthews photo below of the roundhouse, taken in November 1956, is an example. It shows that there were garden tracks on both sides of this particular roundhouse  (photo courtesy John Signor); I will build similar garden tracks. You can click to enlarge.

Although this photo was taken very late in the SP steam era, there are four steam engines visible (and the smoke presumably indicates another one in the roundhouse), at least three of them 2-8-0’s, and no diesels in sight.
My next effort is to add sheathing to the structure and add all windows and doors. I will illustrate that in my next post.
Tony Thompson
Posted by Tony Thompson at 9:28 AM