In my various route card postings, I began with some prototype photos and information, in the post entitled “Chalk marks and route cards,” available through this link: http://modelingthesp.blogspot.com/2011/11/chalk-marks-and-route-cards.html . I posted additional information on locations and size of route card boards in my third post, “Route cards-3,” which can be viewed here: http://modelingthesp.blogspot.com/2011/11/route-cards-3.html . The most recent in the series was a post describing the physical size of route card boards (at: http://modelingthesp.blogspot.com/2012/01/route-cards-7.html ).
I do get questions from time to time, asking whether my model route cards have anything written on them. Given that they are three or four inches in size, roughly square, on the prototype, no! I don’t want to make up HO scale paperwork that size with lettering on it. But sometimes I add a pencil line on one of my cards if it is on the large side. You don’t have to be able to read it, only to perceive that there is something on it.
Readers of this blog may be familiar with the “Patch” switching layout of Keith Jordan, set in downtown Los Angeles. Among the places it has been described is in GMR (Great Model Railroads), 2012, Kalmbach, page 34. Keith not only located some collected examples of route cards used in that area, but managed to interview someone who knew a lot about the switching process. Here are three of his tags, two denoting transfers (to PE and SP), one indicating a switching district.

Keith doesn’t apply these to cars as such, but uses them as switching aids while operating the layout. That is, he uses them full size (see the GMR article for more details on his system). But since they are based on prototype cards, they are informative.
Recently Doug Harding in Iowa sent me several route cards from his area, all from the Minneapolis & St. Louis Railway (M&StL), and they are a different type than the ones Keith Jordan uses. A very interesting one is a directional one, presumably for drag freights, but possibly also for some priority named “B”: 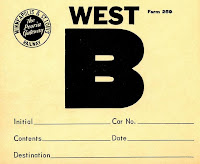 Doug also sent several M&StL route cards for cars to be interchanged with other railroads. This is a common switching situation and I would think most roads used tags like these.

It is intriguing that these three cards each show a different type face for the destination road, maybe a deliberate choice but more likely reflecting design of individual cards at different times.
These card examples are only to illustrate what might be on a route card, though in HO scale they would be pretty hard to read—except maybe the M&StL “B” card. Remember, they are only about three or four inches square. For that reason, I will probably continue to use blank squares of paper on my models.
Tony Thompson

Posted by Tony Thompson at 9:47 AM