In my first post on the topic of my hill just west of Ballard (it can be viewed at: http://modelingthesp.blogspot.com/2013/11/repairing-ballard-hill.html ), I described the problem with this hill. I needed to repair a combination of the damage due to moving from Pennsylvania to California, along with the results of having to cut off the hilltop for interim storage.
As mentioned in that first post, the cut-off sections of hill were saved, but not all pieces looked like they could be re-used. One clear survivor was the bottom of the hill on the Ballard side, which was largely intact. I tried “gluing” it back in place, using Sculptamold paper mache, and it worked well. When mixed to be rather stiff, the stickiness of this material will indeed attach things together. The reason, of course, is that there is glue included in the mixture, along with clay and powdered paper, to hold the stuff together. I merely took advantage of the glue component. Here is a photo of the reattached piece. Note that the hillside no longer fits perfectly at the base. This will be easily repaired.

Another problem was to tie together the pieces of screen wire which would underlay the new hilltop. I tried several ways to do this, including using Sculptamold as a glue, but the best procedure seemed to be weaving some fine wire through the edges of pieces to be joined, or else pinning pieces together with small finishing nails, just as you would pin two pieces of paper together. The exact shape of this screen armature isn’t important, because I know from experience that it will be necessary to make multiple layers of hardshell, paper mache, or both, to refine contours to the desired final shape. Accordingly, a more or less cylindrical shape is fine for now, and will permit closing the gap in the hilltop. Here is how the screen looked, in a horizontal side view from the outer end of the peninsula.

The previous hill had a bit of a saddle in the line of the ridge top, and it looked like the same thing can be accomplished again. You can also see some cracks in the old hillside.
My basic plan for creating a shell on this wire armature was to start with the Woodland Scenics product, Plaster Cloth. 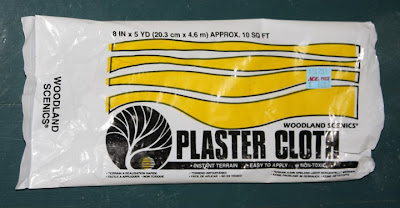 This is a cheesecloth-like fabric impregnated with plaster. Their directions say to merely dip each length of cloth, not allow it to soak at all, and then apply. I used a wide Pyrex casserole dish, which made the dipping easy to do, and the wet strips were easy to apply, though keeping them from doubling and sticking to themselves takes some practice. With half a dozen strips of different lengths overlapped on the screen to form a foundation, here is how it looked from a high angle, again from the outer end of the peninsula. Some of these strips are overlapped to form a double layer, others remain single layers at this point. Screen along the edges is not covered yet.

With this first shell in place, the next day I spritzed the first layer with a water sprayer (so that the dried plaster does not suck water out of the fresh plaster, causing it to set too fast), then added more Plaster Cloth strips over the top of some of them. In that way, I made sure at least a double layer of strips was everywhere, and I also extended coverage somewhat beyond what you see in the photo above.
At this point, it is ordinarily necessary to adjust contours toward a more natural-looking hill. One way to do it is with wadded paper, held down with masking tape, then simply adding more Plaster Cloth over the wads. It’s important to recognize that you don’t have to get your contours entirely right on the first go. But I will come back to that point.
I will continue with this project in a future post, in which I will describe my efforts to apply the old piece of hilltop, while making realistic contours on the skyline.
Tony Thompson
Posted by Tony Thompson at 11:06 AM