In the previous post, I described making an armature of screen wire to roughly define the desired shape of my new hilltop, and the application of the Woodland Scenics product, Plaster Cloth, to make a plaster shell. It can be seen at: http://modelingthesp.blogspot.com/2013/12/repairing-ballard-hill-part-2.html .

Next, I made contour adjustments with wadded paper, constrained with masking tape. As I mentioned in the previous post, it’s important to recognize that you don’t have to get your contours entirely right with the first layer. My goal here was to get the profile of the ridge top to look generally like the previous version, so that I could evaluate whether the surviving piece of ridgetop scenery could be re-attached and look right. Here are some of the wads, toward the left of the photo, in the last step before covering them up. 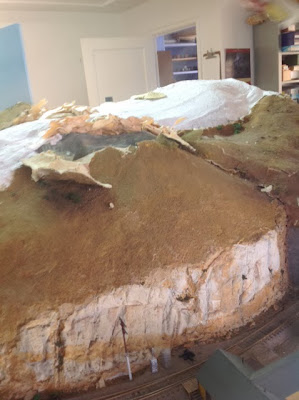 With these adjustments to the shape of the hill, it was time to try fitting the saved piece of hilltop to the new armature.
I decided I wanted to try and “glue” the old material to the new plaster shell. To that end, I spritzed everything with a water spray, then used a putty knife to apply generous blobs of Sculptamold in the areas where I expected close contact of the old hilltop. Here you see me applying one blob; another is in the foreground. Photography, incidentally, was by my wife, using her iPad. 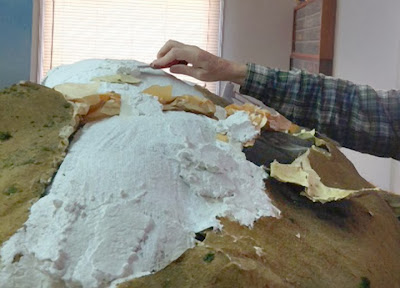 My younger son Sylvan was in town for Thanksgiving, and I enlisted him to help me hold and move the large and somewhat flexible piece of the old hilltop. To my surprise, it fit really well to the new armature and matched up with the old edges where it had been cut. Of course this was the desired result, but I had really doubted whether it would work well enough to be worth the trouble. Here we are, in the process of wiggling it to get the best possible fit. 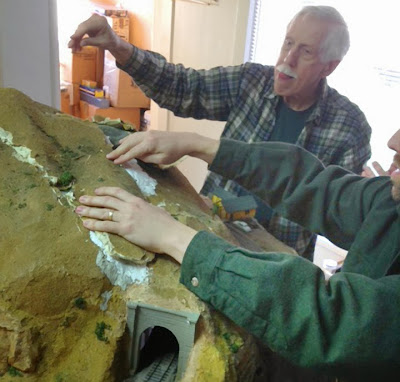 With the large piece in place and pressed down into the Sculptamold “glue,” I then went around the perimeter of the added piece and tried to get all edges stuck down and aligned as well as could be. 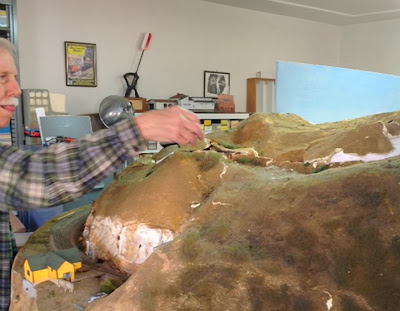 On the wall in the background, just above my wrist, is the John Allen Award, presented to me in 2009 by Coast Division of Pacific Coast Region, NMRA.
As I mentioned above, the old piece of hilltop fit onto the new armature far better than I had any right to expect. I could then go ahead with filling gaps with more Sculptamold. At an intermediate stage in the process of suturing the scenery into one piece, it looked like this from above. 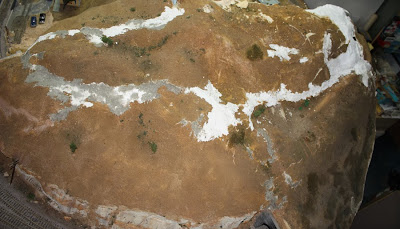 The white material is Sculptamold, the gray is the Brandt’s taxidermist paper mache I described in the previous post on this topic, a much finer textured material which makes a better final surface, and which I apply over the Sculptamold.
More work is needed to close all cracking in the scenery, and to refine all contours to a realistic curvature and smoothness. (Later I will offer some general remarks about contour principles.) Then the paper mache can be painted brown, preliminary to adding ground foam and other scenic materials. But I will postpone those topics to a future post.
Tony Thompson

Posted by Tony Thompson at 9:38 AM