In the previous posts in this thread, I showed part of the hill’s original appearance, and described the state of the hill before starting repair (see this one at: http://modelingthesp.blogspot.com/2013/11/repairing-ballard-hill.html ), then showed my beginning steps with a screen-wire armature and a base layer of Plaster Cloth (a Woodland Scenics product). That post is at this link: http://modelingthesp.blogspot.com/2013/12/repairing-ballard-hill-part-2.html .
At this point, I did a test to see if saved pieces cut from the hilltop would fit onto my armature, and because it did, I was able to show the process of reinstalling it: http://modelingthesp.blogspot.com/2013/12/repairing-ballard-hill-part-3.html . I then began repairing the joints between the scenery pieces, using paper mache from both Sculptamold and Brandt’s (a taxidermist’s product).
Having done all that, the hillside contours on the front or peninsula-end side of the hill looked pretty good, and I began painting them a base color. I used a Rust-Oleum color called “Nutmeg,” which I have found does an adequate job representing dirt (though it will be covered up with ground foam and other materials in subsequent steps). Here is part of it (some areas remain unpainted). The repaired area may not be obvious but you can click on the image to enlarge it.

Meanwhile, the back of the hill wasn’t nearly so well served by the saved pieces of scenery, because there was a major area for which those pieces were not worth re-using. Here is how it looked with that first coat of Plaster Cloth, and the old hilltop piece in place. Note at left that the tunnel portal area requires complete rebuilding, and that some sort of slope needs to be created at far right. The block of lead at lower center is holding down another glued section. 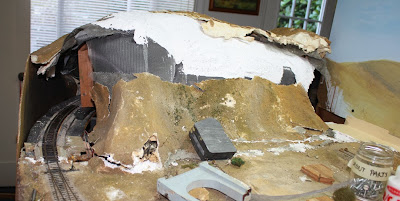 I added some small pieces of screen wire to extend the armature over the tunnel portal area, and did the same at the far right, next to the backdrop. Then more strips of Plaster Cloth helped tie all this together. The tunnel portal is temporarily in place to indicate location. This is already better, though the slope at far right needs improvement. It is too steep at the top and doesn’t extend far enough to the right.

My next step was to add paper wads to areas needing greater height of surface. I only show this step because I have seen modelers wring their hands over exactly how to do this. My answer would be, just put almost anything you want, more or less where you want it, and don’t worry about the final result at this stage, because you can count on the ability to modify and improve it at later steps. 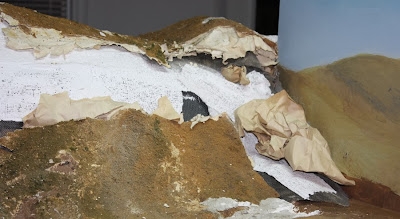 Hard to be more informal than the photo above! But it is all you need in most cases. This was followed up with more strips of Plaster Cloth, after water-spritzing all surfaces to be covered with the cloth. Below is the result. The slope at right is still not what I want, but looking better, certainly heading in the right direction. 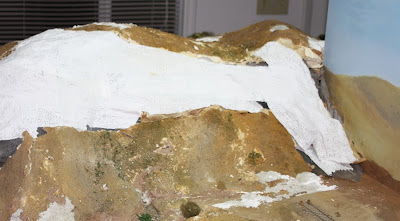 Note also that I have now tied the top of the hill at upper right to the slope below.
Now for a few general comments on contours, which is what I work on after the Plaster Cloth stage is finished. Real landscapes are predominantly convex, that is, curved outward. There certainly are concave areas, such as the bottoms of stream valleys, but convex dominates in most places. Basic hardshell, whether made my old way with paper towels, or now with Plaster Cloth, tends to be kind of “draped” over whatever is underneath. You may have wadded up newspaper (something I have done on several layouts), or made a web of strips of corrugated cardboard, or used various tricks with screen wire. But once you “drape” hardshell over it, you get dips, sags, wrinkles, folds, and other features which are utterly unlike real landscape.
So the refinement process, for which I use Sculptamold, sets out to make all those unrealistic areas smoothly convex. I tend to make multiple applications of the Sculptamold as I get closer and closer to the desired appearance, and then to make a final, fine-grained surface with the Brandt’s paper mache. A putty knife is good for most application, but in places I then wet a finger and smooth/adjust the contour that way.
Having said all that, if you look at the last photo above, you will see that the hillside just has a single slope, almost cylindrical. But I hope to give the impression that this hill is farther away that it really is, which I think would be conveyed if I add some subsidiary ridges. I added a center ridge, the same way as I showed above for the far-righthand slope: wadded up some paper, taped it down, and applied Plaster Cloth over it. Once that had fully set, I started smoothing out the contours with Sculptamold, as you see here. 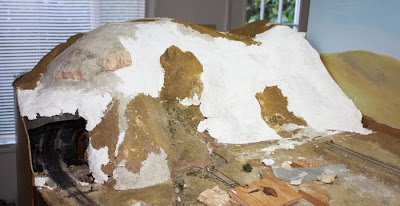 Note also that with the hillside so steep above the tunnel portal, I decided to work in a couple of rock outcroppings. I had some old plaster rock castings, already colored to suit the coastal formation color, so simply broke a couple of pieces to fit, and faired everything in with paper mache.
At this point, finishing the back or Ballard side of the hill is just a process of continuing to add paper mache (usually Sculptamold first, then Brandt’s), letting it dry, judging what else is needed, and adding more. So I will stop at this point, and defer conclusions to the next post.
Tony Thompson