Every year for quite a few years (at least 25), a meeting called the “Bay Area Layout Design & Operations Weekend” has been put on in January, often the weekend before the Super Bowl. It’s organized by the Layout Design SIG (Special Interest Group) and the Operations SIG of NMRA, under the auspices of the Pacific Coast Region (PCR) of NMRA. You can read about it on the PCR website, at: http://pcrnmra.org/sigs/ .
Last fall, layout tour organizer David Parks asked me if I would be open for this year’s layout tours. Gulping a bit, I agreed. I was well aware I had a whole bunch of layout projects in midstream, and ideally would finish at least a few of them before the open house, or at least get them to a presentable state. But naturally I felt some pressure to do a lot of projects. I know well from my days in the world of work that deadlines can be your friend — sometimes it’s amazing how much you can accomplish under pressure. But suffering under a self-imposed deadline can feel like one of those things you should have been smart enough to avoid. Of course, that’s what one always realizes in hindsight.
Anyway, I made a “to do” list that seemed like it was realistic, and set to work. Long story short, I actually did finish nearly all the things I originally listed, even though I knew some were a stretch. Repairing the ocean beach (see the post at: http://modelingthesp.blogspot.com/2013/11/rebuilding-my-ocean-beach.html ) was one of them; another was the Ballard hill (see: http://modelingthesp.blogspot.com/2014/01/repairing-ballard-hill-conclusion.html ). Yet another was building enough of my new section (Santa Rosalia) so that I could complete all backdrop painting, including repairs where new sections were joined to older ones. That project only got partly completed; the latest report on how far I had progressed was at: http://modelingthesp.blogspot.com/2014/01/constructing-santa-rosalia-backdrop_29.html . Still, I did meet my main goal, to get that backdrop far enough along so that it would be presentable.
But finally the big day came: Saturday, January 25. The layout tour list listed me and ten others. It was a self-guided tour, set for the evening hours, 7–10 PM. We put out some cookies and waited to see what would develop. I have on some previous occasions had my layout open for self-guided tours and had only a half-dozen visitors.
But that was not what happened this time! I would estimate about 50 people visited during the three hours. There were often 6 to 8 people in the room at a time, and all seemed to enjoy visiting and viewing the layout. Cookies had to be replenished. Tangerines were a cookie backup; they were consumed also. Photographs were taken. And a pleasant roar of conversation was the order of most of the evening.
I asked my wife to take a few snapshots. Of course many turned out to show mostly the backs of heads, but here are a couple of interesting ones. At left in this view of the Shumala side of the layout is Seth Neumann, chair of the weekend’s meeting. At center is Pete Cressman, and at right is my next-door neighbor, Joel Kaufman, who was helping out by running trains while I talked to guests.

And on the Ballard side, at photo center is David Parks, who organized the tours and originally invited me to be open for this event. 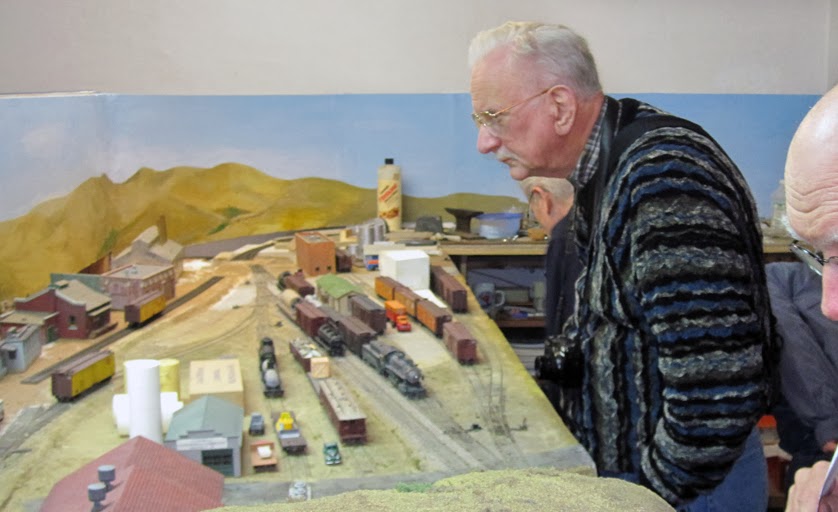 I prepared and handed out a one-page layout description, to provide some background for visitors. This proved especially timely, since Mr. Parks forgot to distribute the brief descriptions he had previously requested from layout hosts! But that didn’t really matter, since what I wrote was more extensive than what I sent to David. I will either post this description to Google Drive or perhaps simply include it in a future post.
In addition to the pleasure of moving several projects forward in preparing for the open house, I had the fun of showing off the layout in its present state to a fair bunch of people. Well worth any small headaches along the way.
Tony Thompson
Posted by Tony Thompson at 9:43 AM